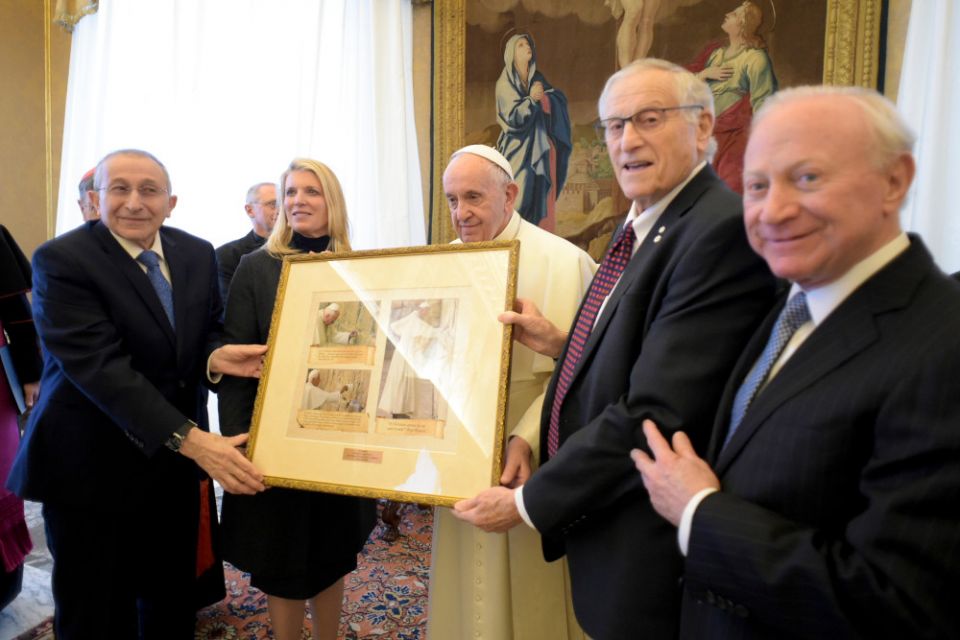 Pope Francis accepts a gift as he leads a meeting with a delegation from the Simon Wiesenthal Center, an international Jewish human rights organization, at the Vatican Jan. 20, 2020. The pope told the group, "I will never tire of firmly condemning every form of anti-Semitism." (CNS/Vatican Media)

Vatican City — Pope Francis condemned the "barbaric resurgence" of anti-Semitism and criticized the selfish indifference that is creating the conditions for division, populism and hatred.

"I will never tire of firmly condemning every form of anti-Semitism," the pope told a delegation from the Simon Wiesenthal Center, an international Jewish human rights organization based in Los Angeles that combats hate and anti-Semitism around the world.

Meeting the delegation at the Vatican Jan. 20, the pope said, "It is troubling to see, in many parts of the world, an increase in a selfish indifference" that cares only about whatever is easy for oneself and lacks concern for others.

It is an attitude that believes "life is good as long as it is good for me, and when things go wrong, anger and malice are unleashed. This creates a fertile ground for the forms of factionalism and populism we see around us. Hatred rapidly grows on this ground," he added.

To tackle the root cause of the problem, he said, "we must commit ourselves also to tilling the soil in which hatred grows and sowing peace instead."

With integration and seeking to understand others, "we more effectively protect ourselves," the pope said, therefore, it is "urgent to reintegrate those who are marginalized, to reach out to those far away" and support those who have been "discarded" and to help people who are victims of intolerance and discrimination.

Francis noted that Jan. 27 would mark the 75th anniversary of the liberation of the Auschwitz-Birkenau concentration camp from Nazi forces.

Recalling his own visit in 2016 to the extermination camp, he underlined how important it is to make time for moments of reflection and silence, so as to better hear "the plea of suffering humanity."

Today's consumer culture is also gluttonous with words, he said, churning out so many "useless" words, wasting so much time on "arguing, accusing, shouting insults with no concern for what we say."

"Silence, on the other hand, helps to keep memory alive. If we lose our memory, we destroy our future," he said.

The commemoration of "the unspeakable cruelty that humanity learned of 75 years ago," he said, should "serve as a summons to pause," be silent and remember.

"We need to do this, so we don't become indifferent," he said.

And he asked that Christians and Jews continue to use their shared spiritual patrimony to serve all people and to create ways of drawing closer together.

"If we do not do this — we who believe in Him who from on high remembered us and showed compassion for our weaknesses — then who will?"