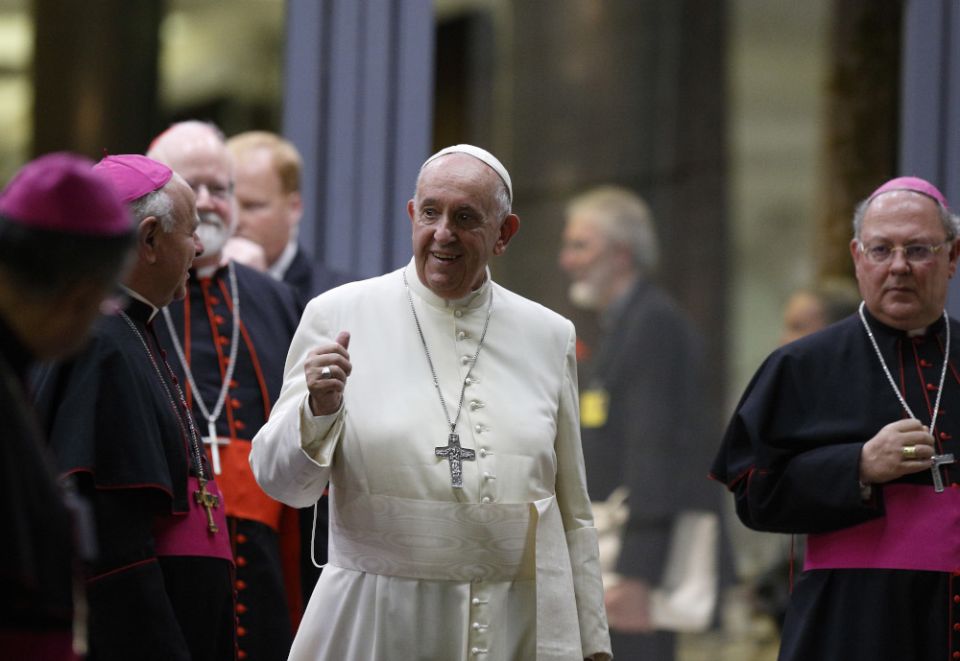 Pope Francis leaves the final session of the Synod of Bishops for the Amazon at the Vatican Oct. 26, 2019. (CNS/Paul Haring)

Vatican City — Pope Francis has completed work on his highly anticipated response to last year's Vatican gathering of Catholic bishops from the Amazon that may allow for the ordination of married men as Catholic priests in the nine-nation region, NCR can reveal.

Catholic bishops around the world are receiving a letter from the Vatican this week, advising them that the document, which is also expected to lament devastating environmental destruction in the region and may detail new ministries for women in the church, is nearing publication.

"The draft is currently being reviewed and corrected and then needs to be translated," states the letter, which is signed by retired Brazilian Cardinal Claudio Hummes and was obtained by NCR.

"Pope Francis hopes to promulgate it by the end of this month or in early February," writes Hummes, who served as the synod's lead organizer.

Francis' response to the Oct. 6-27 gathering, known as a Synod of Bishops, is among the most awaited documents of his nearly seven-year papacy. The text is expected to address a request from the 185 synod members that he allow for bishops in the Amazon region to ordain current married deacons as priests, in order to meet sacramental needs in the vast, hard-to-traverse area.

The as yet unpublished text received additional attention this week, with unexpected news that retired Pope Benedict XVI had coauthored a volume defending the church's practice of clerical celibacy.

Benedict's intervention touched off fears among theologians that the former pope might be trying to tie Francis' hands, effectively preventing the reigning pope from approving the synod's request.

Benedict's personal secretary, Archbishop Georg Gänswein, has since claimed that the ailing, 92-year-old ex-pontiff did not mean to coauthor the volume, and has asked that for the removal of Benedict's name as a coauthor.

Hummes' letter is dated Jan. 13, the day after news of the publishing of Benedict's book first broke.

The cardinal appears to acknowledge the unique atmosphere surrounding Francis' coming document, suggesting to the world's bishops that they may want to begin organizing press conferences to support the release of the text.

Hummes tells the prelates that they should expect to receive the document via email under embargo "when the day of promulgation draws near."

The cardinal also provides the bishops with links to six resources from them to consult as they prepare for the release of the text. Those include the synod's final document, Francis' final speech to the gathering, and the pope's 2015 environmental encyclical "Laudato Si', On Care for Our Common Home."

"Let us join in sincere prayer to Our Father of all mercies to bless Pope Francis and all the Bishops in promulgating the Exhortation, and to dispose the People of God in the Amazon and throughout the world to receive it with faith and hope, intelligently and effectively," Hummes concludes.

Your thoughts on married priests and women leadership