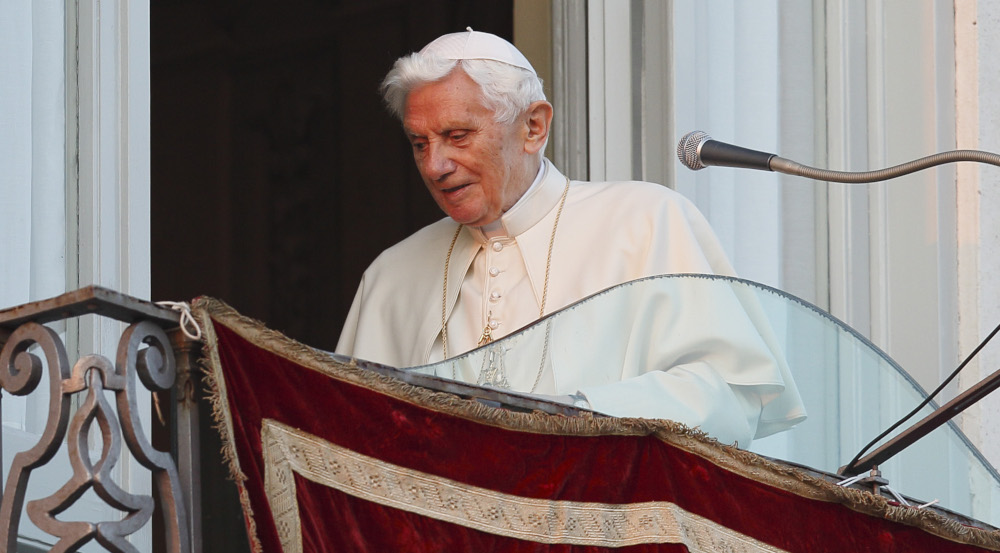 Retired Pope Benedict XVI's name is being removed as a coauthor of a controversial new book defending the Catholic Church's practice of clerical celibacy after dueling accounts emerged of the ex-pontiff's involvement in the preparation of the volume.

The removal, confirmed in a tweet Jan. 14 by Cardinal Robert Sarah, the other author of the book, comes after an odd and dramatic public dispute between Sarah and Archbishop Georg Gänswein, Benedict's private secretary.

In fact, announcement of the change in authorship came only 90 minutes after Sarah had tweeted a statement defending the choice to list Benedict as a coauthor, claiming the former pope had reviewed the entire manuscript of the volume, the cover design, and also consulted on the publication date.

Sarah, who leads the Vatican's liturgy office, even quoted a Nov. 25 conversation with Benedict, in which the cardinal said the ex-pontiff had told him: "I agree that the text be published in the form you have foreseen."

Within an hour, Gänswein had told Italian and German-language news agencies that Benedict only thought he was preparing an essay for the volume, and did not intend to be listed as a coauthor.

"He never approved any project for a coauthored book, and never saw nor authorized the cover," the archbishop told Italy's Ansa agency.

The book, which was set to be released in France Jan. 15, carries the title Des profondeurs de nos cœurs ("From the Depths of Our Hearts"). The volume, which defends clerical celibacy in stark terms, comes as Pope Francis is considering the possibility of allowing older, married men to be ordained as priests in the Amazon region.

Benedict's announced involvement touched off a firestorm of concern among theologians, who worried about the impact of a former pope weighing in on an issue under active consideration by the reigning pontiff.

The original cover had listed the two authors as "Benedict XVI" and "Robert Cardinal Sarah" and featured photos of both men. The text includes one essay from each man and an introduction and conclusion that were originally said to be co-authored. Gänswein now says Benedict only wrote the one essay and was not involved in the other texts.

Even for the Vatican, where backstabbing among officials in frescoed hallways is often the norm, the public dispute between Sarah and Gänswein was unusually dramatic.

The back and forth kicked off in the evening of Jan. 13, when several Spanish-language outlets published reports claiming that an unnamed source "very close" to Benedict, presumed to be Gänswein, had denied the ex-pontiff knew Sarah was working on a coauthored book.

Shortly after the appearance of the first reports, Sarah took to Twitter, sharing scans of three letters he had received from Benedict in September and October as plans for the book were taking shape.

In his first tweet in the morning of Jan. 14, Sarah said he could "solemnly affirm" that Benedict had meant to take part in the book and had reviewed corrections towards the creation of the final draft.

In the fuller statement posted three hours later in which he recounted reviewing the manuscript with Benedict, the cardinal called the creation of controversy over the issue "deeply despicable" but said he forgave those who had "slandered" him.

Given that the removal of Benedict's name as a coauthor of the new volume does not resolve the dispute between Sarah and Gänswein over the extent of the former pope's involvement, some are calling for Benedict himself to explain his original intentions.

"Will Joseph Ratzinger speak on the record with his own voice, without filter?" asked Massimo Faggioli, a historian and theologian at Villanova University, using Benedict's given name.

Others raised questions in conversations with NCR about the future of the role of the pope emeritus.

Christopher Bellitto, a historian who has written extensively on centuries of popes, suggested that at some point Francis could create a commission of lay and clerical experts to create new norms for future popes who decide to resign.

"The norms must especially include how and when the former pope will communicate with the outside world, including a statement of what should be obvious: as a former pope, his words and actions hold no authority greater than that of a bishop in communion with the reigning pope," said Bellitto, a professor of history at Kean University in New Jersey.

"A former pope must not publish under a title he no longer holds," said the historian. "That title and name give his writing an authority it should not represent itself as having. To be polite, it is inaccurate."

Natalia Imperatori-Lee, a theologian at Manhattan College, said the saga over the book on celibacy "shows that the cardinals themselves are still learning how to work with the office of the 'pope emeritus.'"

"Perhaps the next conclave can set restrictions and norms for this role," she suggested.

A version of this story appeared in the Jan 24-Feb 6, 2020 print issue under the headline: Benedict's name removed from book on celibacy after dispute.