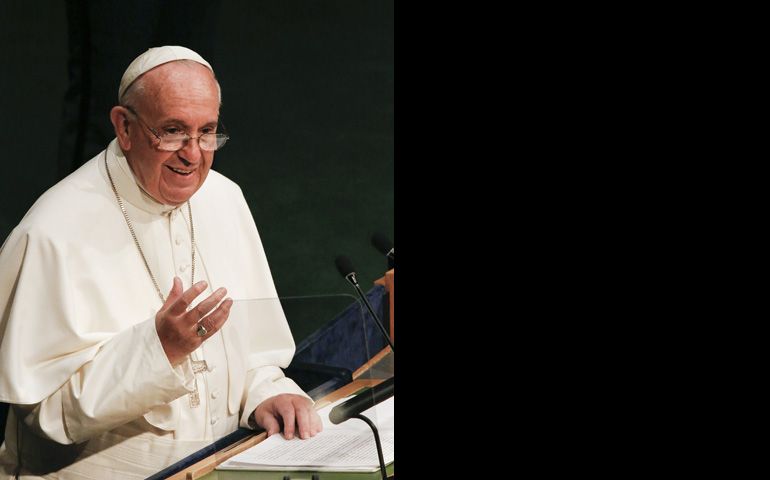 Pope Francis addresses the General Assembly of the United Nations in New York Sept. 25. (CNS photo/Bob Roller)
This article appears in the Francis in the United States feature series. View the full series.

United Nations — At “the world’s pulpit” that is the United Nations, Pope Francis stressed here Friday morning that future development efforts remember the human face of those they seek to help escape poverty and attain a dignified life.

In a speech without direct mention of climate change, Francis nonetheless pressed for “reclaiming the environment,” and expressed confidence negotiations in Paris would “secure fundamental and effective agreements.”

The pope also urged for an end to nuclear weapons, war and a culture of exclusion, and a recognition of the moral law in human nature, one that differentiates between man and woman and has “absolute respect for life in all its stages and dimensions.”

“The common home of all men and women must continue to rise on the foundations of a right understanding of universal fraternity and respect for the sacredness of every human life, of every man and every woman, the poor, the elderly, children, the infirm, the unborn, the unemployed, the abandoned, those considered disposable because they are only considered as part of a statistic.

“This common home of all men and women must also be built on the understanding of a certain sacredness of created nature,” Francis told an audience hall filled with more than 150 world leaders, the U.N.’s largest such gathering which came together for the adoption of a new global agenda that will direct development efforts for the next 15 years.

The pope called the passage of the 2030 Agenda for Sustainable Development, formally adopted after his speech, “an important sign of hope.” The 17 goals and 169 targets seek to end poverty, promote education and gender equality, secure access to water and sustainable energy, and to address climate change.

The next step for the goals, formally adopted by unanimous vote among the 193 member states, will be developing indicators to measure their implementation, something Francis seemed to reference when he stressed that the number and complexity of global problems “require that we possess technical instruments of verification.”

The best and simplest measures to implementing the goals, he said, will be “effective, practical and immediate access” for all to housing, dignified work, adequate food and drinking water, education, and religious and spiritual freedom.

“These pillars of integral human development have a common foundation, which is the right to life and, more generally, what we could call the right to existence of human nature itself,” the pope said.

He added that integral human development “cannot be imposed” but rather built up and allowed to flourish in each individual and family, what he referred to as “the primary cell of any social development.” Governments, then, must do everything possible to provide conditions that allow for people to create and support families, at minimum through access to lodging, labor, land and spiritual freedom. He also spoke against financial agencies that imposed “oppressive lending systems” on people that generate greater poverty, exclusion and dependence.

Political and economic activity, he added, is only effective when guided by the concept of justice and in “constant conscious of the fact that, above and beyond our plans and programs, we are dealing with real men and women who live, struggle and suffer, and are often forced to live in great poverty, deprived of all rights.

“To enable these real men and women to escape from extreme poverty, we must allow them to be dignified agents of their own destiny,” Francis said.

Delivering the fifth papal address to the United Nations and the first to open its General Assembly session, Francis offered accolades for the international organization’s achievements in its 70 years.

“All these achievements are lights which help to dispel the darkness of the disorder caused by unrestrained ambitions and collective forms of selfishness,” Francis said.

“Certainly, many grave problems remain to be resolved, yet it is clear that, without all those interventions on the international level, mankind would not have been able to survive the unchecked use of its own possibilities,” he said.

In introducing the pope to the U.N. body, Secretary-General Ban Ki-moon pointed toward Francis’ request on the first page of his encyclical, “Laudato Si’, on Care for Our Common Home”: “I wish to address every person living on this planet.”

“Your Holiness, welcome to the pulpit of the world. We are here to listen,” Ban said.

Francis spent much of his speech connecting environmental destruction with the cultural phenomenon of social and economic exclusion.

“The misuse and destruction of the environment are also accompanied by a relentless process of exclusion. In effect, a selfish and boundless thirst for power and material prosperity leads both to the misuse of available natural resources and to the exclusion of the weak and disadvantaged,” he said.

“Economic and social exclusion is a complete denial of human fraternity and a grave offense against human rights and the environment,” he said.

Immediate steps toward preserving and improving the natural environment would in turn lead to a possibly quick end “to the phenomenon of social and economic exclusion,” he said, one that permits the trafficking of humans, organs, drugs and weapons. The world demands of its leaders a will “effective, practical and constant” in reaching that end, the pope said.

Before his address, Francis met with U.N. staff, thanking them for their work in embodying the “ideal of a united human family.” He also laid a wreath to honor U.N. workers who have died in the service of the organization.

In the General Assembly hall, he described war as “the negation of all rights and a dramatic assault on the environment,” in addition to the “urgent need” to work toward a nuclear weapons-free world. He praised the recent Iran disarmament deal as “proof the potential of political good will and of law.”

“If we want true integral human development for all, we must work tirelessly to avoid war between nations and between peoples,” he said.

It was Pope Paul VI who in the first papal address to the U.N. in 1965 called for "No more war, war never again."

In Francis’ conclusion, he connected his with Paul’s final words nearly 50 years ago: “The danger comes neither from progress nor from science … The real danger comes from man, who has at his disposal ever more powerful instruments that are as well fitted to bring about ruin as they are to achieve lofty conquests.”

“The present time invites us to give priority to actions which generate new processes in society, so as to bear fruit in significant and positive historical events. We cannot permit ourselves to postpone “certain agendas” for the future. The future demands of us critical and global decisions in the face of world-wide conflicts which increase the number of the excluded and those in need,” Francis said.

Bishops briefed on rollout of environmental encyclical at spring meeting