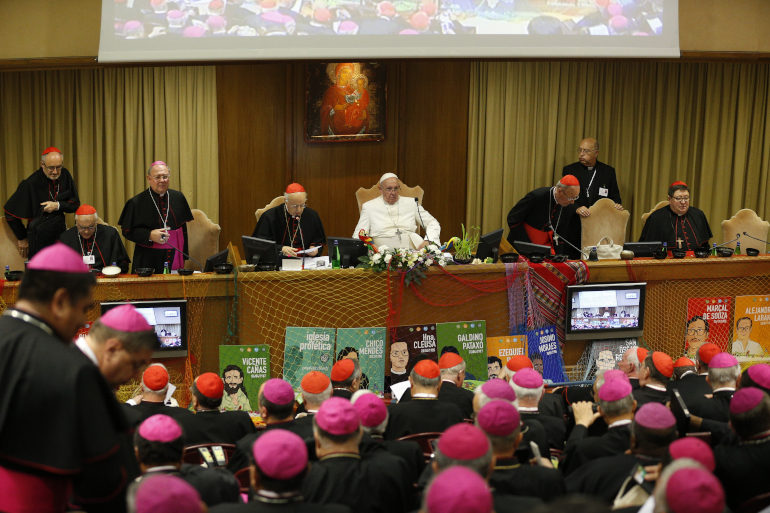 Pope Francis attends the final session of the Synod of Bishops for the Amazon at the Vatican in this Oct. 26, 2019, file photo. (CNS photo/Paul Haring)

Pope Francis significantly widened the scope of the next planned meeting of the world's Catholic bishops, postponing the event by one year to allow for periods of consultation in every local diocese and at the continental level before the opening of the usual Vatican gathering of prelates.

In an unexpected announcement May 21, the Vatican said the pontiff had chosen to take the move so that the next Synod of Bishops would better involve "listening to all of the baptized."

Francis has held four synods during his eight years as the head of the Catholic Church, tasking them to discuss difficult issues such as the church's ministry to Catholics who are divorced and remarried and the ongoing destruction of the Amazon rainforest.

Although those gatherings had all involved input from Catholics at the local level, they had primarily taken place during a monthlong meeting at the Vatican of about 300 of the world's Catholic bishops.

The new process will culminate in such an event in October 2023, but will have two prior phases: one held in local dioceses from October 2021-April 2022 and one held at the continental level from September 2022-March 2023.

Francis will open the overall, three-phase event at the Vatican this Oct. 9-10. The synod, which had previously been scheduled for October 2022, still carries the same theme: "For a synodal Church: communion, participation and mission."

Cardinal Mario Grech, the head of the Vatican's office of the Synod of Bishops, told official outlet Vatican News that they chose to undertake the new, three-part format because "the time was ripe for a wider participation of the people of God in a decision-making process that affects the whole church and everyone in the church."

Grech said the synod now will change "from an event into a process."

"The Second Vatican Council teaches that the people of God participate in the prophetic office of Christ," said Grech. "Therefore, we must listen to the people of God, and this means going out to the local churches."

"The governing principle of this consultation of the people of God is contained in the ancient principle 'that which touches upon all must be approved by all,' " the cardinal continued.

"This is not about democracy, or populism or anything like that," he said. "Rather, it is the church that as the people of God, a people who by virtue of baptism, is an active subject in the life and mission of the church."

The Vatican said the first phase of the new synod process would involve each Catholic diocese undertaking consultation meetings with local Catholics and then hosting its own "pre-synodal" gathering, which will come up with a text to be submitted to the national bishops' conference.

The national conference will then undergo "a period of discernment" about the texts it receives from the local dioceses and come up with its own document, to be submitted to the Vatican's office for the Synod of Bishops. The Vatican will use those texts to create a first draft of the synod's instrumentum laboris, or working document, prior to September 2022.

The second phase of the new process will involve gatherings of bishops at the continental level, who will also create texts about their discussions and forward them to the Vatican. Those texts will be used to create a second draft of the instrumentum, to be released prior to June 2023.

It was not immediately clear how the continental assemblies would be arranged. While many continents, such as Europe, Asia, and Central and South America, already have cross-country conferences or federations of Catholic prelates, others, like North America, do not.

The Vatican did not give exact dates for the final phase of the synod, the Vatican gathering, but said it would be held in October 2023. 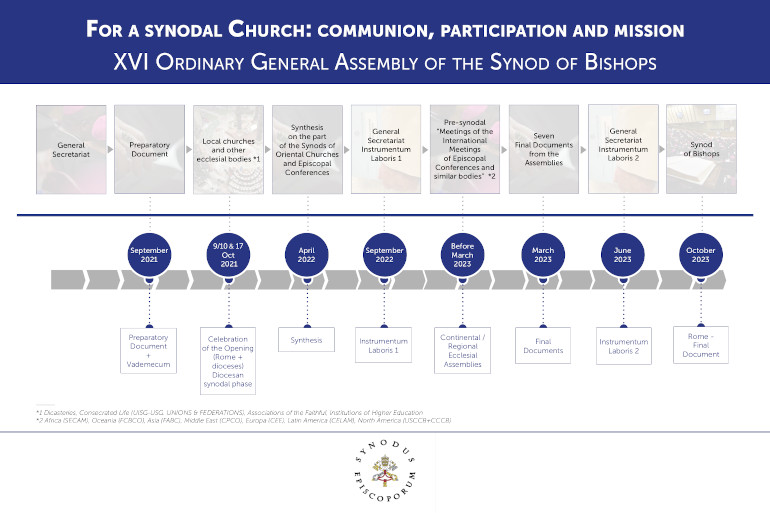 Francis' last Synod of Bishops, which focused on the nine-nation Amazon Rainforest region, was held at the Vatican from Oct. 6-27, 2019.

The bishops at that gathering decried the environmental devastation caused by extractive industries in the region, and also asked Francis to consider ordaining married men as priests on a limited basis to address a lack of Catholic ministers there.

In a February 2020 document responding to the gathering, the pope did not mention the latter request.

Francis previously held a synod in 2018 focused on young people, and two synods in 2014 and 2015 focused on family life issues.

The 2014 and 2015 gatherings attracted a wide range of attention for their discussions about how the church might better minister to people in a range of life situations, including those who are divorced and remarried or in LGBT relationships.

In Amoris Laetitia ("The Joy of Love"), his 2016 document responding to those synods, Francis asked Catholic clergy to let their lives become "wonderfully complicated" by embracing God's grace at work in even unconventional family situations. He also called for "pastoral discernment" on a case-by-case basis about whether divorced and remarried persons might receive Communion.

This story appears in the Synod on Synodality feature series. View the full series.
A version of this story appeared in the June 11-24, 2021 print issue under the headline: Francis widens scope of next synod.