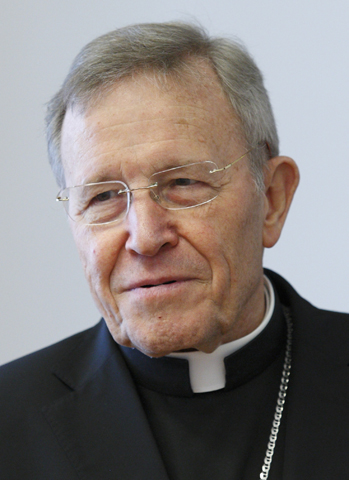 Retired German Cardinal Walter Kasper, a theologian who has been searching for a new pastoral approach to divorced and remarried Catholics for more than 20 years, was scheduled to address the Feb. 20-21 meeting of the College of Cardinals in preparation for the Synod of Bishops on the family.

Pope Francis has said that the situation of divorced and civilly remarried Catholics will be one of the key topics of discussion at the extraordinary synod he has scheduled for Oct. 5-19.

Jesuit Fr. Federico Lombardi, Vatican spokesman, said Tuesday that the cardinals' meeting would not pre-empt the synod in any way. A consistory, he said, is a meeting "where every cardinal can freely express his thoughts," but it is not a decision-making body and will not feature a vote on propositions.

The cardinals' conversation "does not bind the synod in any way," he said, although synod members will be informed about what the cardinals said.

Kasper, who will turn 81 March 5, is not particularly known for his work on issues related to the family. Before he became the Vatican's top ecumenist, heading the Pontifical Council for Promoting Christian Unity from 2001 to 2010, he was best known internationally as author of "Jesus the Christ," a theological text widely used in university Christology courses.

He also made headlines for his role in an extended debate in 2001 with then-Cardinal Joseph Ratzinger, prefect of the Congregation for the Doctrine of the Faith, over the relationship of the local churches and the universal church. The respectful but sharp theological debate was conducted in the pages of scholarly magazines and at conferences where one or the other spoke.

Sales of Kasper's most recent book, Mercy: The Essence of the Gospel and the Key to Christian Life, got a big bump in March 2013 when Pope Francis effectively plugged it during his first Angelus address as pope.

Describing Kasper as a "superb theologian," the pope said his book on mercy "has done me so much good, so much good."

"Cardinal Kasper said that feeling mercy, that this word changes everything. This is the best thing we can feel: It changes the world," the pope said. "A little mercy makes the world less cold and more just. We need to understand properly this mercy of God, this merciful Father who is so patient."

The cardinal's book is set to be published in English in early May. It includes chapters on mercy from a philosophical point of view, in the Bible and in the teaching of Jesus. The book also has a chapter on how mercy is exercised in the church and asks whether current practices -- including those related to the divorced and remarried -- are effective reflections of mercy as one of the principal traits of God.

"The most serious criticism that can be raised against the church is that its words (about mercy) often are followed by or seem to be followed by few actions, that it speaks of the mercy of God, but many people perceive its actions as rigorous, harsh and cruel," the cardinal wrote.

"These accusations resonate when, among other times, one talks about how the church relates to people who have made serious mistakes or have failed," he wrote, and "with the divorced who have remarried civilly."

In 1993, when Kasper was a diocesan bishop in Germany, he and two other bishops issued pastoral instructions telling priests they could give Communion to divorced and civilly remarried Catholics convinced their first marriages were invalid, even if they had not received annulments.

The Vatican Congregation for the Doctrine of the Faith, headed by then-Cardinal Ratzinger, forced the three bishops to rescind their policy, saying "the church affirms that a new union cannot be recognized as valid if the preceding marriage was valid."

Last year, the archdiocese of Freiburg, Germany, made a similar proposal, which has been criticized by Cardinal-designate Gerhard Müller, current prefect of the doctrinal congregation. However, Cardinal Reinhard Marx of Munich and Freising, Germany, and Cardinal Oscar Rodriguez Maradiaga of Tegucigalpa, Honduras -- both members of Pope Francis' advisory council of eight cardinals -- have suggested Freiburg might be allowed to carry out the proposal.

In preparation for the synod, the Vatican asked bishops around the world to consult people in their dioceses about how well Catholic teaching on the family is understood and accepted. Several bishops and bishops' conferences have released at least a partial analysis of their reports, which point to the question of divorce and remarriage as being very important, at least in Europe and North America.

Both the German bishops' and the Swiss bishops' summaries said Catholics in their countries believe the church is unmerciful to Catholics whose first marriages have failed.