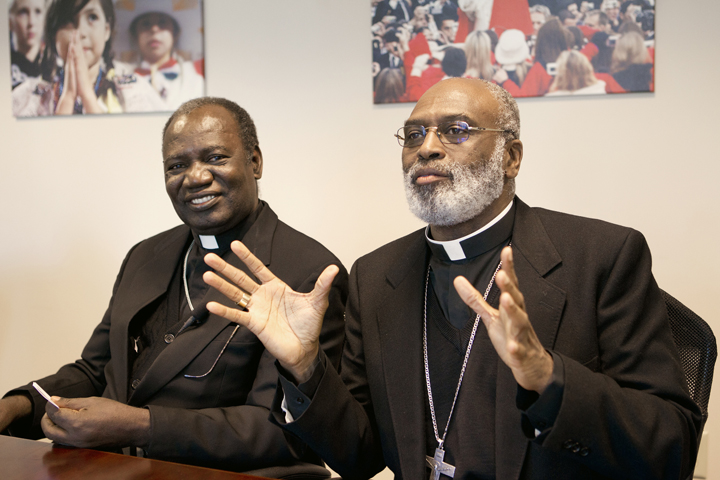 African prelates at the worldwide meeting of Catholic bishops on family are not blocking discussions on sometimes-controversial subjects like the church's stance towards gay people and those who have divorced and remarried, Ghanaian Archbishop Charles Palmer-Buckle has said.

"It would be difficult for anybody to tell me Africa is blocking anything," said Palmer-Buckle, speaking at a Vatican press conference Thursday.

“We are here to share our view," said the archbishop. "So if somebody should think that Africa is blocking somebody, I think Africa is only proposing what it feels very strongly about."

"We are not here to block anybody," he said. "We are here to share what we have as a value to the greater good of the universal church."

The archbishop was speaking about the Synod of Bishops, an Oct. 4-25 meeting called by Pope Francis that has brought some 270 prelates to Rome to discuss issues of family life.

Palmer-Buckle's comments touch on continuing speculation that there are divisions on certain issues in discussion at the synod based upon the regional background of the different participants.

Among the issues known to be at discussion among the prelates are church practice towards Catholics who divorce and remarry without first obtaining annulments from the church and the possibility of using more inclusive language towards gay people.

Asked about the second issue at the press conference Thursday, the Ghanaian archbishop said that African attitudes towards gay people are changing slowly.

Mentioning Francis' famous 2013 press conference -- in which the pontiff said of gay people: "Who am I to judge them if they're seeking the Lord in good faith?" -- Palmer-Buckle said those words had "huge repercussions" in his country.

"People who are different from us are sons and daughters of God and we have to welcome them and be able to open the doors of the church to them," said the archbishop. "They are human, they have human rights and their human rights and dignity should be respected and upheld."

"We are doing what we can," he said of African responses to homosexuality. "It takes time for individual voices like that to be heard -- when you are dealing especially with something that is culturally difficult for people to understand."

"They have lived with it for millennia," he continued. "Attitudes in Africa towards people who are different has been something that has been there for so long."

"It would be a bit deceptive to think overnight individuals will change their opinion, [that] overnight documents would be written in favor and the rest of it," said Palmer-Buckle.

"I'd say give the countries time to deal with the issues from their own cultural perspectives," he said. "And I'd like you to know that we must underline that the rights of all sons and daughters of God are to be upheld by the church everywhere."

"And we are trying," he continued. "I don't want to say we have reached there. No, no, no -- perfection is not yet something that we have obtained but we are working towards it."

Palmer-Buckle was speaking Thursday at a briefing alongside Vatican spokesman Jesuit Fr. Federico Lombardi and two other synod members: Italian Cardinal Edoardo Menichelli and Archbishop Ignatius Joseph III Younan, the Patriarch of Antioch and all the East of the Syrians.

The Ghanaian said he was one representative speaking on behalf of the African continent, which has eight regional episcopal conferences and 37 different individual bishops' conferences.

Both he and Younan, whose see is based in Lebanon, spoke of a variety of struggles facing families in their contexts. Palmer-Buckle focused some time on the continuing refugee crisis of those leaving Africa across the Mediterranean and Younan spoke of the horrific violence and persecution suffered by Christians across the Middle East.

The patriarch said emigration from his region is "sort of forced migration due to this terrible situation."

"These people would like to get out of this Hell ... because they are persecuted and they are often kidnapped," he said.

"The tragedy that Christians live in the Middle East is hard to describe and we cannot dismiss it as just current affairs," said Younan. "We try to do our best in order to make the voice of these people be heard."

"We truly feel that we have been sometimes forgotten or betrayed by the Western countries because it seems that the governments ... only follow a policy of political and economic expediency," he said.

Palmer-Buckle also said that accusations that the synod discussions are too focused on problems facing the Western hemisphere are incorrect.

"Sometimes, those of us in Africa, what we feel sad about is that anything good in Africa is not good enough for the European media," said the Ghanaian. "Even when we say something, when we are contributing beautifully, it is hardly reported."

"Sometimes we believe that is what is giving maybe a wrong perspective that this synod is more dealing with European issues," he said.

"But no!" Palmer-Buckle exhorted. "We are here from Africa; we are here in good numbers ... and we are contributing very, very validly to what is being discussed."

"I can give you the assurance, from those of us who are participating, that we don’t think that the issues being dealt with are European," he said. "Absolutely not. They are issues of the entire Catholic church and entire humanity. We are here to contribute from that perspective."

The synod bishops have been meeting Wednesday and Thursday in small discussion groups, divided by language preference. They will reconvene on Friday and Saturday into open session.

While all the meetings are held behind closed doors, the Vatican press office has hosted daily briefings on the deliberations. Each of the 13 separate language groups is also expected to release a short report on the first stage of their discussions sometime Friday.

The Vatican announced the leaders of each of the language groups Wednesday and also published a full list of the composition of each of the groups Thursday.

Some of the groups are quite diverse.