Grace of priesthood is given for service, not priests' glory, pope says 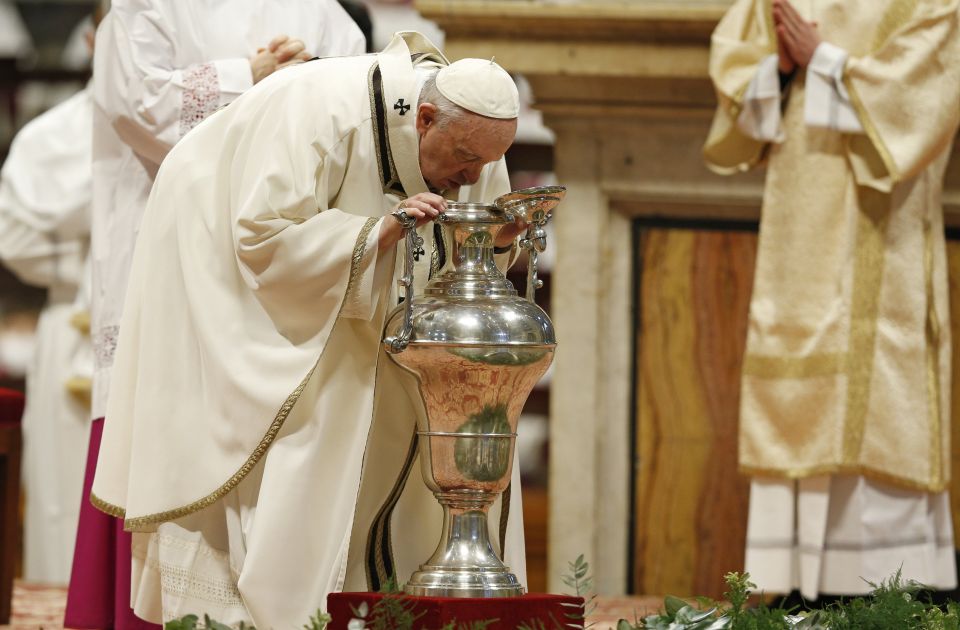 Pope Francis breathes on chrism oil, a gesture symbolizing the infusion of the Holy Spirit, as he celebrates Holy Thursday chrism Mass in St. Peter's Basilica at the Vatican April 14, 2022. (CNS photo/Paul Haring)

VATICAN CITY — In the life of every Christian, but especially of priests, God's love and forgiveness are the greatest rewards, and any attempt to seek one's own glory plays into the hands of the devil, Pope Francis said.

With some 1,800 priests concelebrating and renewing the promises made at their ordinations, Pope Francis celebrated the chrism Mass in St. Peter's Basilica April 14.

The chrism Mass was cancelled in 2020 because of the COVID-19 pandemic, and ongoing restrictions in 2021 meant that only 75 priests from the Diocese of Rome could represent all their brothers at the Mass with their bishop, the pope.

Although masks are still required for most people while indoors in Italy and at the Vatican, Pope Francis' 2022 Holy Week and Easter services were again open to the public. The Vatican said about 2,500 laity joined the pope, cardinals, bishops and priests for the chrism Mass.

Still having difficulty walking, Pope Francis processed to the main altar from the back of the basilica rather than walking the entire length of the church, and he delivered his homily while seated.

Cardinals Mauro Gambetti, the pope's vicar for Vatican City, Angelo De Donatis, his vicar for Rome, Giovanni Battista Re, dean of the College of Cardinals, and Leonardo Sandri, vice dean, were the principal concelebrants at the morning chrism Mass, which is named for the oils blessed during the liturgy.

After the homily and the renewal of priestly promises, deacons wheeled massive silver urns up the center aisle of the basilica to the pope for his blessing. The oils will be distributed to Rome parishes and used for the sacraments of baptism, confirmation, ordination and the anointing of the sick in the coming year.

While thousands of laypeople attended the Mass, Pope Francis' homily was addressed to the priests, including himself and the cardinals and bishops present.

"Being priests, dear brothers, is a grace, a very great grace, yet it is not primarily a grace for us, but for our people," he told them.

"The Lord is inviting us to be faithful to him, to be faithful to his covenant and to let ourselves be loved and forgiven by him," he said. "They are invitations addressed to us, so that in this way we can serve, with a clear conscience, the holy and faithful people of God."

Pope Francis suggested that at the end of each day, "we do well to gaze upon the Lord, and to let him gaze upon our hearts and the hearts of all those whom we have encountered."

That "examen," he said, is not meant to be "an accounting of our sins," but an act of contemplation by which "we review our day with the eyes of Jesus, seeing its graces and gifts and giving thanks for all that he has done for us."

Obviously, he said, sins and temptations also will show themselves, and recognizing them is the only way to reject them.

Pope Francis pointed particularly to the temptation of the "idols" of spiritual worldliness, exaggerated pragmatism and functionalism, all of which are really about "glorifying ourselves" and not God, he said.

"We need to remember that the devil demands that we do his will and that we serve him, but he does not always ask us to serve him and worship him constantly," the pope said. "Receiving our worship from time to time is enough for him to prove that he is our real master and that he can feel like a god in our life and in our heart."

"Seeking our own glory robs us of the presence of Jesus, humble and humiliated, the Lord who draws near to everyone, the Christ who suffers with all who suffer, who is worshiped by our people, who know who his true friends are," Pope Francis said. "A worldly priest is nothing more than a clericalized pagan."

Another "hidden idolatry," he said, is devotion to numbers or statistics, which "can depersonalize every discussion and appeal to the majority as the definitive criterion for discernment."

But "this cannot be the sole method or criterion for the church of Christ," he said. "Persons cannot be 'numbered,' and God does not 'measure out' his gift of the Spirit."

With functionalism, he said, mystery is ignored, and efficiency becomes the measure for everything.

"The priest with a functionalist mindset has his own nourishment, which is his ego," he said. "In functionalism, we set aside the worship of the Father in the small and great matters of our life and take pleasure in the efficiency of our own programs."

Vatican | Grace of priesthood is given for service, not priests' glory, pope says

Francis to visit Colombia in September in peace deal push