Launching World Day of the Poor, Francis says ‘no Christian may disregard’ serving them 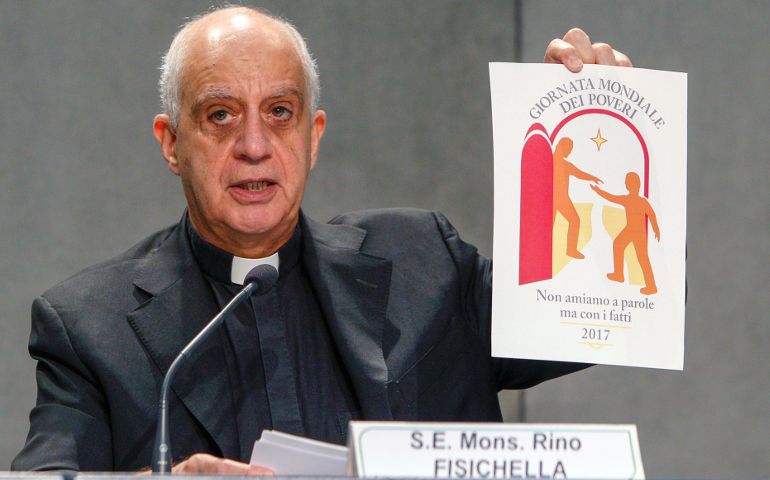 Archbishop Rino Fisichella, president of Pontifical Council for Promoting New Evangelization, speaks at the Vatican June 13 about the theme of the first World Day of the Poor, to be celebrated Nov. 19. (CNS/Robert Duncan)

Vatican City — Pope Francis is calling on Christians around the world to serve the poor with concrete actions that address their daily needs, writing in a document launching a new World Day of the Poor that service to them is “an imperative that no Christian may disregard.”

In the message for the new special day, which will be celebrated Nov. 19 this year, the pope makes a short but poetic and powerful scriptural argument for why Christians must reach out and care for those experiencing poverty.

Citing the examples given in the Acts of the Apostles and in several of the letters in the New Testament, Francis says service of the poor was “one of the first signs of the entrance of the Christian community upon the world’s stage.”

The pope also reminds Catholics that they believe Christ is found in every human person.

“If we truly wish to encounter Christ, we have to touch his body in the suffering bodies of the poor, as a response to the sacramental communion bestowed in the Eucharist,” states Francis. “The Body of Christ, broken in the sacred liturgy, can be seen, through charity and sharing, in the faces and persons of the most vulnerable of our brothers and sisters.”

Francis also puts forward three new ways Christians can be seen as blessed, in the style of Jesus’ beatitudes.

“Blessed … are the open hands that embrace the poor and help them: they are hands that bring hope,” he says. “Blessed are the hands that reach beyond every barrier of culture, religion and nationality, and pour the balm of consolation over the wounds of humanity.”

“Blessed are the open hands that ask nothing in exchange, with no ‘ifs’ or ‘buts’ or ‘maybes:’ they are hands that call down God’s blessing upon their brothers and sisters,” he continues.

The World Day of the Poor is a new celebration on the Catholic calendar, created by Francis at the end of his 2015-16 Jubilee year for mercy. In the document concluding the year, Misericordia et Misera, the pope asked that Catholics celebrate the special day every year on the 33rd Sunday of Ordinary Time, which usually falls in November.

Francis’ message for the first World Day of the Poor has been given the title “Let us love, not with words but with deeds” and was released by the Vatican Tuesday. The title of the message is taken from John’s first letter, in which the apostle tells the Christian community of his time: “Let us not love in word or speech, but in deed and in truth.”

“These words of the Apostle John voice an imperative that no Christian may disregard,” the pope opens his message. “The seriousness with which the ‘beloved disciple’ hands down Jesus’ command to our own day is made even clearer by the contrast between the empty words so frequently on our lips and the concrete deeds against which we are called to measure ourselves.”

“Love has no alibi,” the pope continues. “Whenever we set out to love as Jesus loved, we have to take the Lord as our example; especially when it comes to loving the poor.”

Francis also cites the description of the early Christian community described in the Acts of the Apostles, where those following Christ “sold their possessions and goods and distributed them to all, as any had need.”

“The evangelist Luke, who more than any other speaks of mercy, does not exaggerate when he describes the practice of sharing in the early community,” states the pope. “On the contrary, his words are addressed to believers in every generation, and thus also to us, in order to sustain our own witness and to encourage our care for those most in need.”

Francis asks in the message that Christian communities begin celebrating the World Day of the Poor in the week before the special day, and suggests that they can do so by reaching out to homeless or poor people in their areas and inviting them to Mass or a meal together Nov. 19.

“If there are poor people where we live who seek protection and assistance, let us draw close to them: it will be a favorable moment to encounter the God we seek,” he says. “Following the teaching of Scripture, let us welcome them as honored guests at our table; they can be teachers who help us live the faith more consistently.”

In a press conference at the Vatican June 13 to launch the message, Archbishop Rino Fisichella said Francis would offer lunch to about 500 poor people Nov. 19 after celebrating Mass in St. Peter’s Basilica.

On the World Day of the Poor itself, the pope asks in the message that Catholics and all those of good will “turn their gaze … to all those who stretch out their hands and plead for our help and solidarity.”

“They are our brothers and sisters, created and loved by the one Heavenly Father,” he says. “This Day is meant, above all, to encourage believers to react against a culture of discard and waste, and to embrace the culture of encounter.”

Francis ends his message with a request that prayer be out at the center of the celebration of the new special day and with a reflection on the meaning specifically of the Our Father prayer.

“Let us not forget that the Our Father is the prayer of the poor,” he says. “Our asking for bread expresses our entrustment to God for our basic needs in life. Everything that Jesus taught us in this prayer expresses and brings together the cry of all who suffer from life’s uncertainties and the lack of what they need.”

“When the disciples asked Jesus to teach them to pray, he answered in the words with which the poor speak to our one Father, in whom all acknowledge themselves as brothers and sisters,” says the pope. “The Our Father is a prayer said in the plural: the bread for which we ask is ‘ours,’ and that entails sharing, participation and joint responsibility.”

“In this prayer, all of us recognize our need to overcome every form of selfishness, in order to enter into the joy of mutual acceptance,” he continues.

The pope says he hopes the new World Day of the Poor can “become a powerful appeal to our consciences as believers, allowing us to grow in the conviction that sharing with the poor enables us to understand the deepest truth of the Gospel.”

“The poor are not a problem,” states Francis. “They are a resource from which to draw as we strive to accept and practice in our lives the essence of the Gospel.”

Vatican | Launching World Day of the Poor, Francis says ‘no Christian may disregard’ serving them

Pope on Easter calls for peace in Holy Land