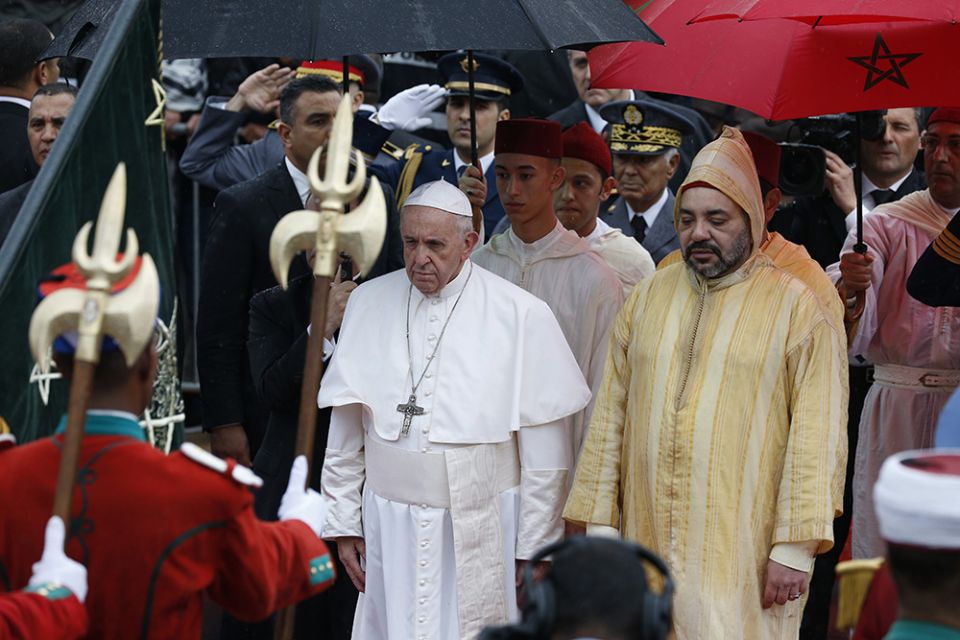 Editor's note: This story was updated March 30 at 1 p.m. CST to include reporting about the pope's meeting with migrants.

RABAT, Morocco — Pope Francis began his two-day visit to Morocco with a call for a global "change of attitude" toward migrants fleeing violence and famine, warning that the continuing crisis of the highest numbers of refugees in decades will "never be resolved by raising barriers [or] fomenting fear of others."

In an address to Morocco's King Mohammed VI and hundreds of the country's political leaders after his arrival March 30, the pontiff likewise labeled the migration crisis "grave" and said it is an "urgent summons for concrete actions."

The pope urged global governments to see migrants as "persons, not numbers" and to acknowledge "their rights and dignity in daily life and in political decisions." He said that many would not have left their home countries "were they not forced to do so."

Francis is visiting Morocco through March 31 in a trip that is also expected to highlight efforts for Christian-Muslim dialogue and to encourage the nation's small Catholic community.

But the main purpose of the visit appears to be a desire to call attention to the difficulties faced by migrants, especially those coming to Morocco from the Middle East or sub-Saharan Africa, many of whom eventually risk dangerous crossings of the Mediterranean to try and reach Europe.

The International Organization of Migration says 131 migrants have died off Morocco's northern coast so far in 2019, and identifies 8,700 "people of concern," or refugees whose living conditions indicate they may be considering such unsafe journeys soon.

Spain, located north of Morocco across the Strait of Gibraltar, reported more than 40,000 undocumented arrivals in 2018.

Regional experts have praised Francis for making the visit, and for choosing to put his emphasis on the needs of migrants.

"It has the potential to be a very significant visit," said Sarah Yerkes, a fellow in the Middle East Program at the Carnegie Endowment for International Peace.

Yerkes, who has focused her research on North Africa and is a former member of the U.S. State Department's policy planning staff, pointed in particular to Francis' decision to meet with a group of migrants a few hours after his visit with the king.

"The big thing that the pope meeting with these communities does is it humanizes them," she said. "Having the pope come meet with them … sends a message that these are people that deserve attention."

In his speech to the king at Rabat's Hassan Tower, an iconic desert-colored minaret of an incomplete 12th century mosque, Francis also referred to the Global Compact for Migration, an international agreement among 152 countries pledging them to meet 23 commitments in their migrant policies. 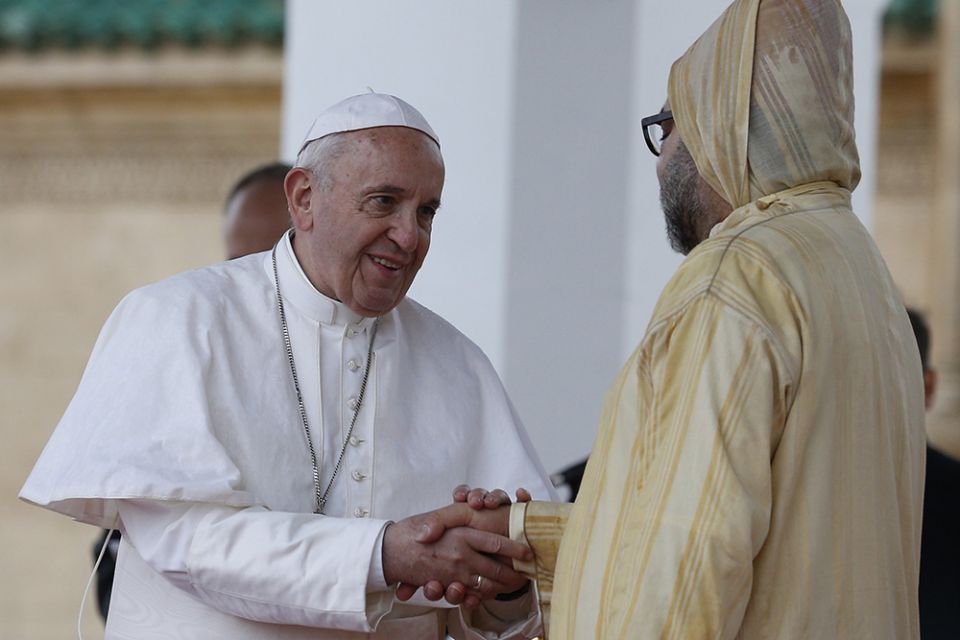 Pope Francis greets King Mohammed VI of Morocco during a meeting with the Moroccan people, government authorities, civic leaders and the diplomatic corps March 30 at the esplanade of the Hassan II Mosque in Rabat. (CNS/Paul Haring)

The agreement was negotiated in the Moroccan city of Marrakesh last December, and adopted by the United Nations General Assembly later that month. Five nations, including the United States, voted against the accord.

In his own address, the king referred to his government's asylum policy, which he said is "fundamentally based on solidarity."

Francis arrived in Rabat to an unexpected downpour March 30. The king greeted him on the tarmac of the airport with aides ready with open umbrellas.

The rain did not stop the pontiff from greeting crowds from the popemobile on his way towards the uncompleted mosque site, water bounding off the vehicle's windshield.

The king likewise saluted groups of people lining the open boulevard, standing through the roof of his vintage, open-top 1969 black Mercedes 600 Pullman to wave without protection from the weather.

Francis' visit to Morocco is his second in two months to a majority-Muslim country, following his historic February visit to the United Arab Emirates.

The pontiff referred to the earlier visit in his speech to the political leaders, citing a landmark joint document he signed during that trip with the imam of Egypt's al-Azhar mosque, considered by many as the theological seat of Sunni Islam.

The pope referenced the document's call for Muslims and Christians to build together "a society that is open, fraternal and respectful of differences."

Francis also called his visit to Morocco "a significant opportunity for advancing inter-religious dialogue and mutual understanding among the followers of our two religions."

After a private meeting with the king at his Dar al-Makhzen palace, Francis and Mohammed VI signed a joint appeal regarding Jerusalem, calling for "full freedom of access" to the city for Jews, Christians and Muslims.

The pope then visited a government-run educational institute for Muslim imams and preachers, in what the Vatican has characterized as the first such visit by a Catholic pontiff.

The institute, named for the king, trains both Africans and imams of African descent living in Europe. The government says more than 700 students have attended since it was opened in 2015.

Emile Nakhleh, the founding former director of the CIA's Political Islam Strategic Analysis Program, said the institute is held in high regard by the U.S. government "because it purveys moderate, mainstream interpretations of Islam."

Nakhleh also noted that the school has a special department for the training of female imams.

Hindu Usman, a Nigerian woman attending the institute, told Francis she chose to become educated in theology after witnessing the harm caused by Islamic extremists in her own country, in an apparent reference to Boko Haram.

She said some people in Nigeria "have a very close attachment to religion which is founded on passion rather than knowledge, thereby making some amongst them vulnerable to manipulation by extremist groups who use their vulnerability for spreading hate, violence and extremist ideologies."

"Changing this situation I realize would require that people get educated," said Usman. "Upon my graduation and return home, I will be able to argue and convince [others] that religion is for peace and goodness … that women are equal with men in their rights."

In his later meeting with a group of about 80 migrants primarily from various African countries and hoping to reach Europe, Francis called the refugee crisis a "great and deep wound that continues to afflict our world at the beginning of this twenty-first century."

Asking people to be open to "being touched and moved by those who knock at our door," the pontiff said "their faces shatter and debunk all those false idols that can take over and enslave our lives; idols that promise an illusory and momentary happiness blind to the lives and sufferings of others."

The pope also cited a line from the king's message to the December Marrakesh conference, saying: "The side of the border on which a migrant stands does not make him or her more or less human."

Francis is the second pontiff to visit Morocco, following John Paul II in 1985. Although the nation has a population of some 34.9 million, the Vatican estimates that there are only about 23,000 Catholics in the country.

The pope's schedule for March 31 will be more focused on the small Catholic community. He is to meet with clergy and religious before leading what is expected to be the most attended Mass ever celebrated in the country.