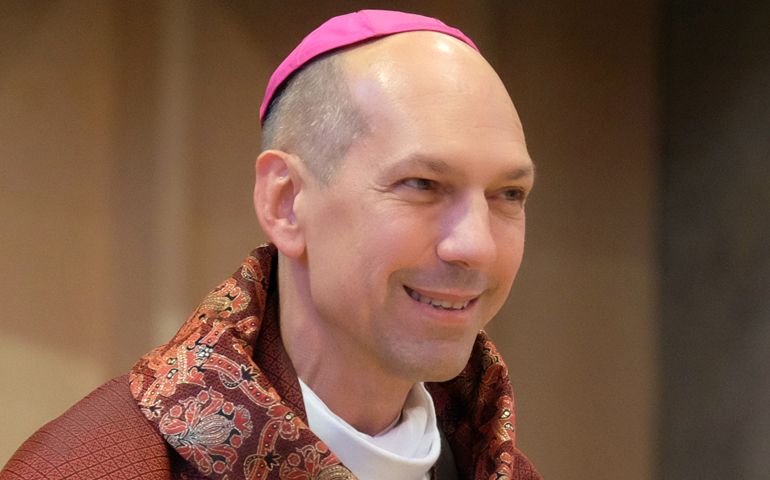 The Catholic church will only be able to create changes in wider society if it engages in dialogue with those outside the faith community by "deeply listening" to them on tough issues, says a new archbishop in Canada's Saskatchewan province.

Archbishop-designate Donald Bolen, who Pope Francis appointed earlier this summer to lead the Canadian archdiocese of Regina just north of the U.S. states of Montana and North Dakota, said the church cannot expect to be heard just by speaking more loudly.

"When we're dealing with really difficult and challenging questions we need to be faithful to church teaching, faithful to the kerygma, the revelation we're given, but we need to bring that into dialogue if we want to be taken seriously and if we want to have an influence on the world," said Bolen, speaking in an NCR interview Thursday.

"It's not by yelling louder," said the archbishop. "It's by engaging in articulate conversation and challenging positions."

Bolen, who has led the nearby diocese of Saskatoon since 2009, previously worked in Rome from 2001-08 at the Pontifical Council for Promoting Christian Unity.

The archbishop, who is to be installed in his new post Oct. 14, spoke about dialogue both in the context of ecumenical relations and in his work in Saskatoon promoting Francis' ecological encyclical Laudato Si'.

He described himself as understanding the church's mission as "having a Gospel to proclaim but the principal way that that is done is through dialogue."

"We're blessed and enriched by entering into ... dialogue," said Bolen, outlining a vision of church "that's in dialogue with the broader culture, respectful towards culture, with a message to proclaim, but deeply listening as well."

The archbishop, who also leads the Canadian bishops' commission for justice and peace, said he has based some of his leadership style on the examples of German Cardinal Walter Kasper and Irish Bishop Brian Farrell, whom he worked under at the pontifical council.

"He's very much a person of dialogue," Bolen said of Kasper. "When we were trying to discern how to deal with a particular situation, he would ask for input."

"When I found myself named a bishop and trying to learn how to lead theirs was a model of leadership that I have encountered and was deeply shaped by," he said. "I was shaped by them in a way deeper than I knew at the time and I have tried to exercise my episcopal ministry in a very consultative manner."

Taken from Thomas Merton's 1953 book The Sign of Jonas, the phrase comes from a poignant moment in Merton's journals where the monk has God use those words to describe God's self.

"In some sense it's been for me the name of God, the name for who God is," said the archbishop about his motto.

"God is the one who sees us as we are and loves us as we are; transforms us by that merciful love," he continued. "I understand mercy as ... a transformative love. It's the love that God has for those who are in need and in some sense broken, needing to be reached out to. And I think that's pretty much who the human race is, who we are."

Bolen also spoke in the interview about the unique challenges facing the church in his area of the Canadian prairie.

Just prior to the announcement of his new appointment in July, the archbishop had spent 36 hours living on the streets with nine other volunteers to raise funds for Sanctum Care Group, a local HIV hospice and transitional care center.

HIV infection rates in Saskatchewan are among the highest in Canada. The disease particularly affects the region's indigenous people, with Canadian health officials saying the rates for them are comparable to those in some African countries.

The archbishop called his June 17-18 experience on the streets of Saskatoon eye opening.

Explaining how he and the other volunteers were asked by organizers to try to panhandle to better understand homeless peoples' experience, Bolen said he was not surprised that people did not offer much money to him.

"That wasn't so shocking," said the archbishop. "What was shocking was that they didn't make eye contact. We got a little insight into how invisible homeless people are, how we make them invisible because we find them threatening and problematic."

"I live in this neighborhood in this poorer part of the city," said Bolen. "It was like seeing my own neighborhood through totally different eyes."

"When I'm busy or in a hurry or on my way to or from work, dressed in clerics, I see some of the challenges of the neighborhood and some of the blessings of it but not much," he continued. "Whereas I could see the neighborhood much better by just slowing down and being there and being a little bit invisible."

"You got to see not only the others on the street with real challenges and problems, but also the sense of community ... and the ways in which people helped and supported each other, which I had missed," he said.

As he prepares to take up his new role in Regina, Bolen said one particular challenge facing the church in his region is building its relationship with indigenous peoples. According a 2011 national survey, nearly ten percent of Saskatchewan’s population of 1.1 million identifies as indigenous.

As part of his work with the Canadian bishops' conference, Bolen helped draft two documents responding to the country's recently closed Truth and Reconciliation Commission, which focused its work on the country's historic residential school system.

Largely administered by Christian churches in the 19th and 20th centuries, the schools removed indigenous children from the influence of their families and culture in an effort to assimilate them into European cultural norms.

"The major challenge that we face pastorally is our relations with our indigenous peoples," Bolen said in the interview. "I think as society we're only beginning to take seriously what happened to indigenous people as European settlers and immigrants came to North America, and the impact that had on indigenous language and cultures and peoples."

"There's a direct line between all of the challenges that indigenous people in our society face today and that experience," said the archbishop. "And we haven't drawn those connections very well."

"As church and as society ... that is our number one social task and responsibility, to learn to walk together with indigenous people and to learn to live together in a new way," he said.

Bolen spoke to NCR via Skype from Spain, where he is on a five-week pilgrimage with several others on the traditional walking route of the Camino de Santiago.

"There's a lot of pilgrims on the road here," said the archbishop. "What you do with the rest of your life seems to be a little less of an issue than where you started out and why you're on the Camino and how you're handling the blisters."

"It's good to get a little distance from my daily routine, which tends to be very busy and quite a lot of stress," he said. "Just to pray and walk and visit, and live a simpler life for a while."

Man dies after setting himself on fire in St. Peter's Square