by Joshua J. McElwee
Vatican
This article appears in the Francis in Romania feature series. View the full series. 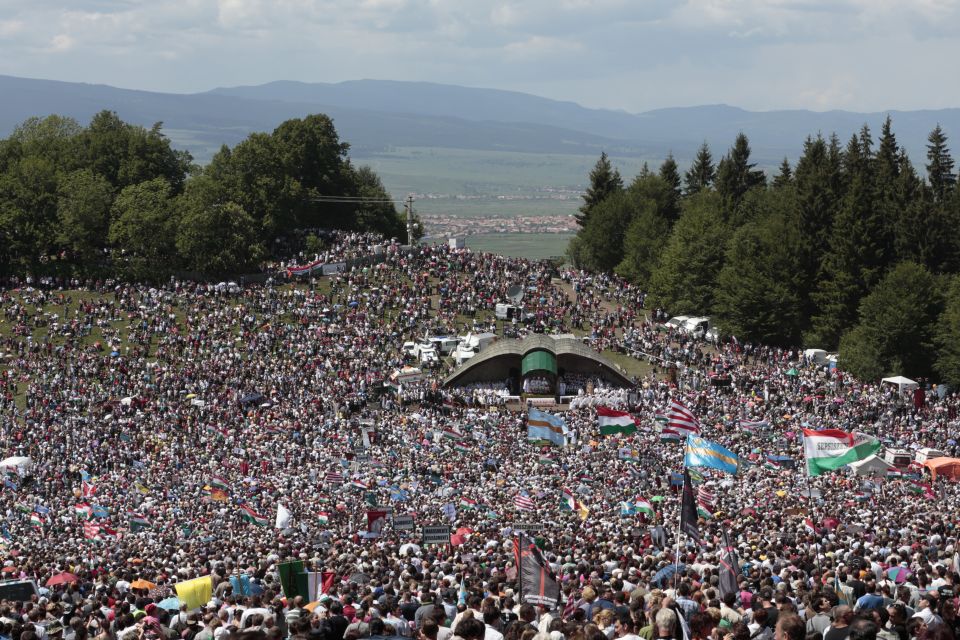 Pope Francis is set to visit his third Eastern Orthodox-majority country in the space of a month at the beginning of June, traveling to Romania just weeks after visiting Bulgaria and North Macedonia.

Beyond its ecumenical dimension, the May 31-June 2 voyage will also have the pontiff spend time with a diverse minority Catholic community, which is split between a primarily immigrant Latin rite population and the Romanian Greek Catholic Church.

One of the highlights of the trip will come on its last day, when the pope is scheduled to travel to the Greek church's Transylvanian headquarters to beatify seven 20th century bishops who were each persecuted by the country's Communist era authorities and died in prison after refusing to renounce their faith.

Bishop John Michael Botean, who leads the Romanian Greek Catholic Church's only diocese abroad, said the trip will be "very, very important" for his community.

Botean, who leads the Eparchy of St. George's in Canton, Ohio, which serves Romanian Catholics across the U.S. and Canada, pointed to the pope's decision to celebrate the beatification ceremony personally.

"The big deal for me and our church is the beatification of our martyred bishops, that he's doing it himself, he's doing it in our home turf, and in a place of immense historical importance," he said.

The Romanian Greek Catholic Church counts about 500,000 members, according to the Vatican's latest statistics. Romania has a total population of about 20 million, with over 80 percent identifying as Eastern Orthodox.

During the Communist Era, Romania's leaders favored the Orthodox church, which was considered more in line with Russia. They deposed the Greek Catholic bishops, imprisoned many of the leaders, and forced the conversions of hundreds of thousands of faithful.

"They were the leaders of our church, they stayed faithful," he said. "In their minds they were explicitly being faithful to the See of Peter."

"They set just a profound witness for me as examples of firmness of conscience and willingness to sacrifice oneself," he said.

Francis is only the second pope to visit Romania, following John Paul II in 1999. 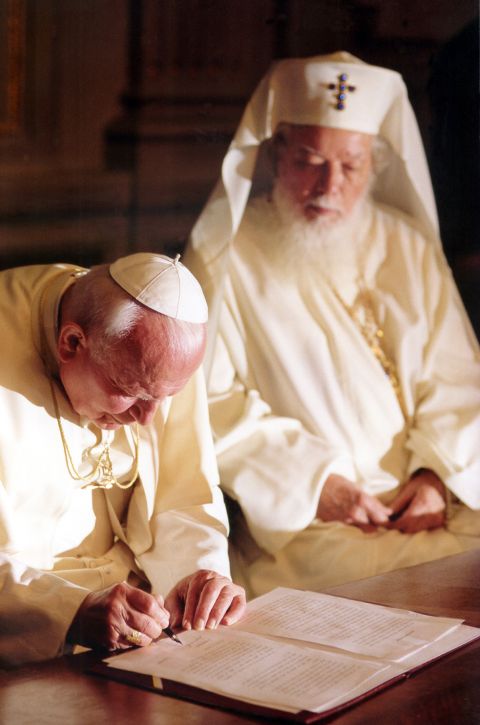 Pope John Paul II and Romanian Orthodox Patriarch Teoctist sign a joint appeal for brotherhood and coexistence in the Balkans, in Bucharest, Romania, in May 1999. The trip was a significant step toward improved relations between the Orthodox majority and the Catholic minority in Romania. (CNS photo/L'Osservatore Romano)

Unlike his predecessor, who stayed in the capital of Bucharest for the two days of his visit, Francis will travel throughout the country. In fact, the pontiff will undertake some of the most intensive in-country travel yet planned in his six years of trips abroad.

"I'm looking forward to this visit being something completely different, because the pope is going to be able to go around, and he's definitely going to the peripheries in Romania," Botean said of the itinerary.

Upon arriving in Bucharest May 31, Francis will meet with President Klaus Iohannis and Prime Minister Viorica Dăncilă before giving his traditional speech to the country's political and civil authorities.

The pope will then meet privately with the head of the Orthodox church, Patriarch Daniel, before giving a public address to the church's permanent synod.

On June 1, Francis heads to visit a Marian shrine in Sumuleu Ciuc, about 175 miles north of Bucharest. To get there, the pope has to take a plane to an airbase and then a helicopter to the town.

Later in the day, Francis then takes another plane a further 175 miles northeast to visit the town of Iasi, where much of Romania's Latin rite Catholic community is based, before returning to Bucharest in the evening.

On June 2, the pope leaves Bucharest for Blaj, about 200 miles to the north; he later takes a helicopter to the town of Sibiu, about 40 miles south of Blaj, before returning to Rome that evening.

It is in Blaj that Francis will celebrate the beatification ceremony, as part of an Eastern rite Divine Liturgy. It appears to be the first time the pope has celebrated such a service.

Botean joked that when he first heard that Francis would be celebrating a Divine Liturgy in Romania, he responded, "Say what?" 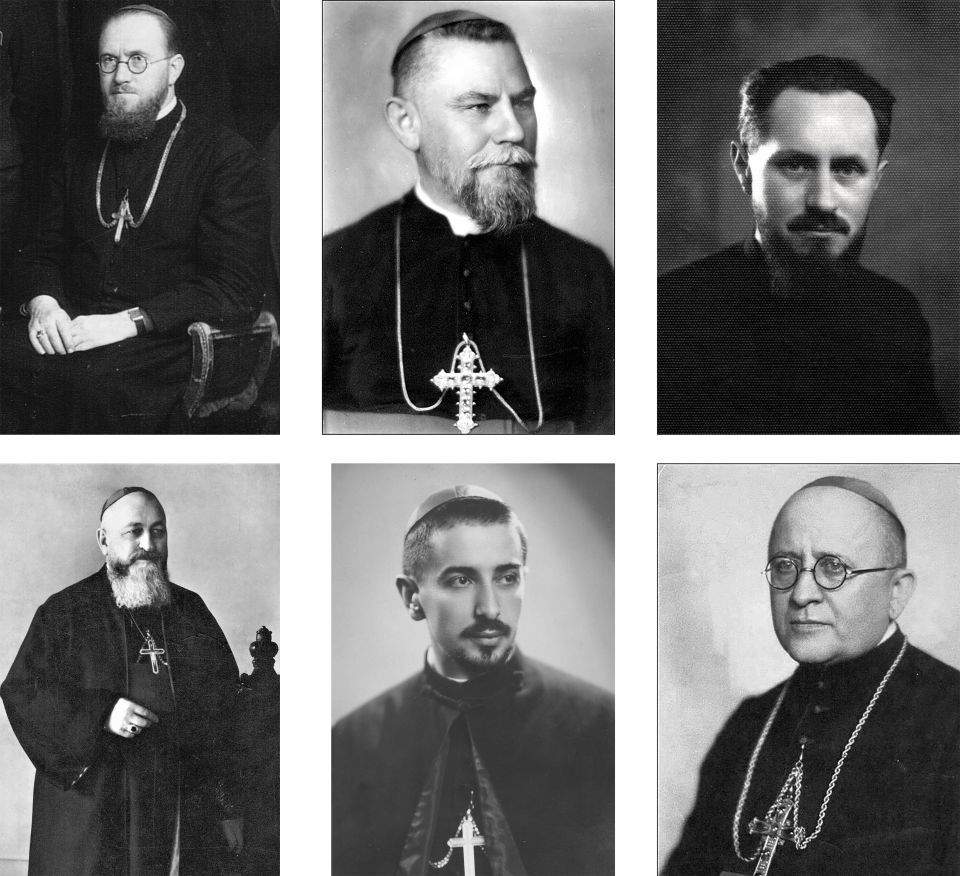 "Most Roman Catholics who attempt it without a whole lot of training get very, very confused and find it too cumbersome and complicated," he said. "And especially if it's a pontifical liturgy, wow. It took me 10 years to learn how to do a pontifical liturgy."

In terms of dialogue with the Orthodox, Paulist Fr. Ronald Roberson said he will be watching to see how Francis handles his May 31 meeting with Patriarch Daniel. Roberson, an associate director of the U.S. bishops' ecumenical and interreligious secretariat, noted that the two are scheduled to recite the Lord's Prayer together.

"That will be important to watch and to see what happens," said Roberson, adding that some Orthodox consider it a "big issue" to pray alongside non-Orthodox Christians.

"One thing to watch for … is the extent to which the pope and the patriarch will pray together," he said. "I don't think that would have been a problem before, but it's become more of a problem for the Orthodox because they've got a resurgent right-wing that's against all of those kinds of contacts."

When Francis visited Bulgaria in May, the pope and the head of the Bulgarian Orthodox Church, Patriarch Neophyte, met privately but did not pray together.

Francis was praised for a spontaneous gesture he made during that encounter, when he paused to kiss Neophyte's Encolpion, a medallion with an icon at the center that Orthodox bishops typically wear around their necks instead of a pectoral cross.

Roberson said the gesture was well received, as the Encolpion is considered a symbol of office for an Orthodox prelate.

"By kissing the Encolpion he is sort of recognizing that he is a bishop of the church," he said. "That seems pretty basic, but in the case of Bulgaria … I think it was an important gesture."