Parolin: Francis' choice of cardinals reflects 'an opening of heart and mind' 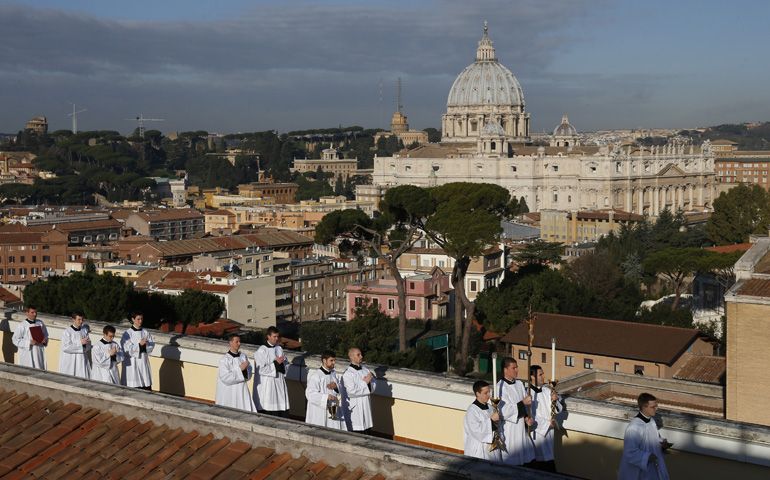 Seminarians lead a procession during the dedication of a new building Tuesday at the Pontifical North American College in Rome. (CNS/Paul Haring)

Rome — The Vatican's secretary of state said Pope Francis' decision to appoint new cardinals from diverse parts of the world reflects the pope's desire to have "an opening of heart and mind in every place."

The decision to appoint 20 cardinals from 18 different countries -- with several from places that have never before had a cardinal -- was "not a sign of any less appreciation of any church" where there have previously been cardinals, Cardinal Pietro Parolin said Tuesday.

"I would like to stress this," Parolin continued. "I think that we have to change a little bit our minds or our interpretations about this thing, looking at the Holy Father and the criteria he is using as an opening of heart and mind in every place, especially the places that traditionally did not receive any attention."

Parolin spoke Tuesday morning in brief remarks to reporters during a blessing ceremony for a new addition to the Pontifical North American College, a seminary in Rome owned by the U.S. bishops' conference that trains and forms many priests from dioceses across the United States, Canada and Australia.

The Vatican official addressed Francis' choices of new cardinals, announced on Sunday, in response to a question over whether the picks reflected that the pope had "less interest" than previous popes in appointing U.S. cardinals.

While cardinals typically come from larger cities known for their Catholic populations or global importance, Francis also chose in his picks prelates from several previously nonrepresented areas: Myanmar and the island nations of Cape Verde and Tonga.

Parolin also discussed the pope's involvement in the recent move toward normalization of relations between the U.S. and Cuba, saying the Vatican wants to use its diplomatic efforts "to help build bridges."

Asked if the Vatican's involvement in the thawing between the two countries reflected a new "golden age" for church diplomacy, Parolin said he thought it might provoke the Vatican's diplomatic efforts to focus on acting to help resolve problems around the world.

"Maybe I think that [it] will accomplish acting -- not only waiting, but making proposals," he said. "There are so many problems that we have to take a more proactive role in the world."

Parolin was also asked if Francis might have an opportunity to address his diplomatic goals at the United Nations, where he has been invited to speak during his upcoming visit to the U.S. in September. Responding coyly, Parolin said: "I think so, but there is no official announcement."

Asked if the visit would also include a stop in Washington, where the pope has been invited to address a joint session of Congress, Parolin responded: "Of course, but no official confirmation has been given."

Francis will be visiting the U.S. primarily to attend the Sept. 22-27 World Meeting of Families in Philadelphia.

Before speaking to press, Parolin toured the college's new addition, a building encompassing some 36,000 square feet over 10 floors. Stopping at each floor during a 45-minute ceremony with many of the seminarians of the college, Parolin blessed the facilities with holy water and offered prayers for those who will be studying there.

The North American College, which is located on a hill overlooking St. Peter's Basilica, houses more than 250 seminarians. The new facility has classrooms, offices, meeting spaces, prayer chapels and practice chapels for priests and seminarians in formation.

The top floor of the building has a brightly lit, large reading room that has windows with a rare 360-degree view of Rome, including a prized view of the dome of St. Peter's.

The facility also has a chapel named for Pope John Paul II, which features stained-glass windows of the pope and Mother Teresa, and a relic of the cassock the pope wore the day he was shot in St. Peter's Square.

Following the blessing of the college's new building, Parolin also celebrated Mass and gave a homily for the celebration of the Catholic feast of the Epiphany.

Using the image of the three wise men, whose visit to the child Jesus the church celebrates at the Epiphany, Parolin said the journey following a star in the night sky to find Jesus indicated that all we do is meant to be given to God.

"If Christ is the meaning of our whole life, then nothing else matters," Parolin said. "If he is the light of the world ... then everything we have, all that we build, is to be for God's glory."

Referring to the gifts given by the wise men to Jesus, Parolin continued: "The gifts of gold, frankincense and myrrh are for the greater glory of God."

Parolin also said the yearly feast was a good time to evaluate one's dedication to God.

"Are we giving to God what is his, letting him use us to bring the world peace?" the cardinal asked. "For us to say that we are living the Christian life, we must offer to God the very best of what we have."

Following the Mass, the college hosted a lunch for seminarians and visitors at which they thanked several benefactors who helped pay for the new building. The primary benefactors thanked were Miriam and James Mulva, who were presented with a papal honor by Newark, N.J., Archbishop John Myers, chairman of the college's board of governors. James Mulva is the former CEO of U.S. energy company ConocoPhillips.

The current rector of the North American College is Msgr. James Checchio, a priest of the diocese of Camden, N.J. He was appointed to the post in 2005.

Vatican | Parolin: Francis' choice of cardinals reflects 'an opening of heart and mind'

It's not enough to love Francis; you must live his teachings, archbishop says