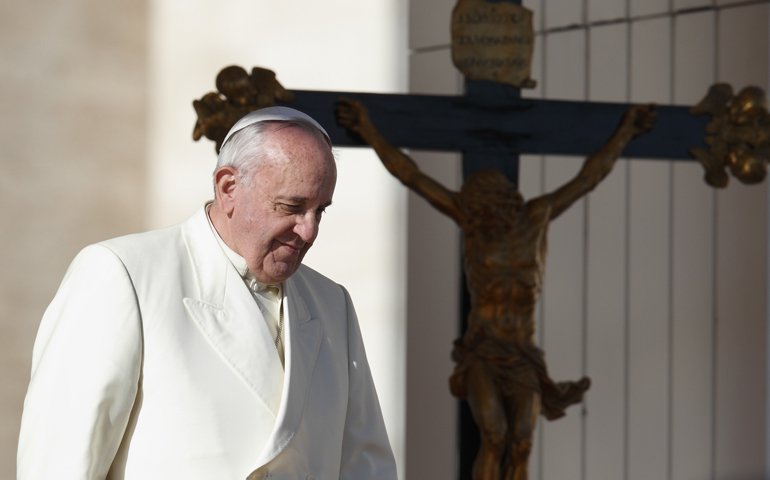 Pope Francis passes a crucifix as he walks down steps during his general audience Dec. 4 in St. Peter's Square at the Vatican. (CNS/Paul Haring)

It's one thing to say kind words about gay people and atheists while admonishing those who would bury them in stones.

It's one thing to walk humbly and call the Catholic church to compassion for the poor.

It's one thing to kiss a horribly disfigured man from whom most people would run in disgust.

But apparently, it's quite another to start calling out growing economic inequality and naive faith in capitalism. By doing just that in his recent apostolic exhortation, Pope Francis has touched a third rail in conservative American politics. So begins the backlash.

Yet in the new round of skirmishing around Francis and his supposedly liberal views, U.S. political pundits and news media wags -- both progressive and conservative -- are missing the point about the pope and what he's up to. Their mistake? They see his words and deeds through the lens of American politics and ideology. What Francis is doing is prophetic, not political, and we should recognize that he's playing, to his credit, in a whole different arena.

Many American conservatives have come to regard the Catholic hierarchy as their culture war ally. This pope is becoming something of a head-scratcher -- and headache -- for them now that he has spoken out against trickle-down economics and the fetishizing of free markets.

Too liberal, Sarah Palin said, while promising, uncharacteristically, to look into it further. Too political, Fox News' Stuart Varney charged, claiming Francis had crossed the line. Too Marxist, Rush Limbaugh concluded: "Somebody has either written this for him or gotten to him."

You might have heard some of the liberal cackling in response to all this conservative hand-wringing. Progressive news media figures who could always be counted on to criticize, not applaud, the Catholic church are sounding positively gleeful about the pope's pronouncements and, more precisely, the conservative reaction.

"When Sarah Palin calls the pope too liberal, he's probably doing something right," wrote Allen Clifton on the Forward Progressives website. "A Progressive Pope is Driving the Wingnuts Batty," declared a headline at the progressive Daily Kos.

Allow the progressives a moment to enjoy their adversaries' discomfort. But before they start claiming Pope Francis as the standard-bearer for the progressive movement, they ought to remind themselves of a few less enjoyable realities.

As observed by pundit E.J. Dionne -- a liberal-leaning Catholic and unabashed Francis admirer -- the pope is no liberal on abortion. Nor, despite his tone change on the matter of same-sex couples, has Francis come out in favor of gay marriage, ordination of women or contraception. The day could come when progressive activists are no longer swooning over Francis but lamenting his "conservative" views on these and other liberal causes.

This, one suspects, will be of little concern to this new face of the worldwide Catholic church. To state what should be obvious, Francis is not a player in American politics. He's not even American, for God's sake. Growing up and pursuing his vocation in Argentina has no doubt had a profound effect on him.

Even more important, the pope is not a politician, a media loudmouth or an activist. He is a religious figure, wholly dedicated to representing the Gospel of Jesus Christ as he understands it to a world caught up in a thousand other things.

As conservative Catholic George Weigel writes, "Pope Francis is a revolutionary. The revolution he proposes, however, is not a matter of economic or political prescription, but a revolution in the self-understanding of the Catholic Church."

Prophetic is probably the best word for the role the pope is playing -- not in the sense of predicting the future, but of standing outside of business and politics as usual and speaking hard and inconvenient moral truths.

Has someone gotten to the pope, as Limbaugh suggests? Yes, actually. Jesus Christ apparently has. So when a news media figure such as Varney blasts Francis for wanting "to influence my politics," one has to ask who's really bringing politics to the discussion about Pope Francis. We'll probably find the answer not in the Vatican but in the mirror.

[Tom Krattenmaker is a Portland-based writer specializing in religion in public life and a member of USA Today's Board of Contributors. He is author of the new book The Evangelicals You Don't Know.]