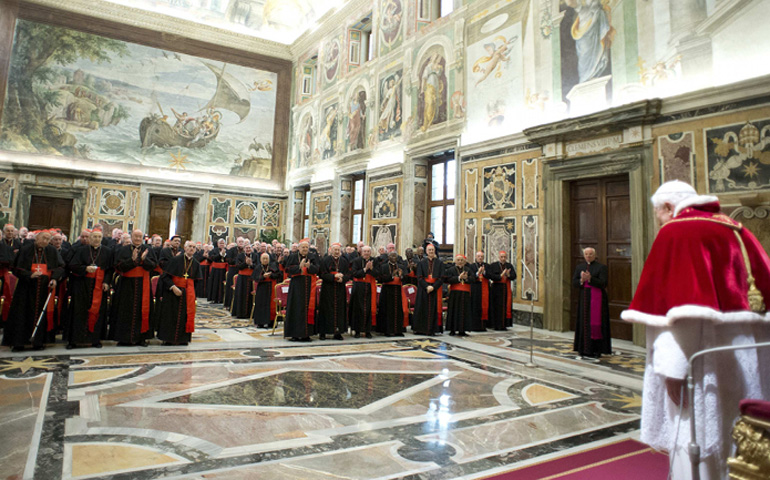 Pope Benedict XVI addresses the College of Cardinals on Thursday at the Vatican. (CNS/Reuters/L'Osservatore Romano)

At his last meeting with the College of Cardinals, among them the 115 men who will elect the next supreme pontiff of the Roman Catholic church, Pope Benedict XVI promised "unconditional reverence and obedience" to his successor.

Benedict's promise came during a one-hour meeting Thursday morning with the cardinals, one of his last official acts before he formally renounces the papacy at 8 p.m. Roman time.

A press conference following the event focused again on some of the problems that have faced Benedict's papacy, including allegations that church governance had not been his specialty.

Benedict will leave the Vatican about 5 p.m. Rome time (11 a.m. EST), taking a helicopter to Castel Gandolfo, the papal summer retreat in the hills outside Rome. Benedict is expected to wait out his last hours as pope mainly in solitude.

"I will continue to be close to you in prayer, especially in the next few days, so that you may all be fully docile to the action of the Holy Spirit in the election of the new pope," Benedict told the cardinals Thursday morning.

He returned to an idea he has expressed repeatedly since announcing his resignation, that his pontificate has at times been stormy.

"In these eight years, we have experienced in faith beautiful moments of radiant light in the church's journey along with times when clouds have darkened the sky," he said.

Cardinal Angelo Sodano, the head of the College of Cardinals, opened the meeting Thursday with a short address on behalf of all cardinals, saying their hearts "burned while we walked with you these past eight years."

"Today, we want to once again express our gratitude to you," Sodano said. "We repeat in chorus a typical expression of your dear native land: Vergelt's Gott, may God reward you."

Benedict then addressed the prelates himself in Italian.

The pope told the cardinals they should act like "an orchestra, where diversity, an expression of the universal church, always contributes to a superior harmony of concord," according to an official translation of the talk.

Benedict said he wanted to leave the cardinals with a simple thought about the mystery of the church. He quoted from Fr. Romano Guardini, his professor and mentor, in a piece Guardini had written in 1964 -- the year the Second Vatican Council approved the Dogmatic Constitution on the Church, known in Latin as Lumen Gentium, or "Light to the Nations."

"The church is not an institution devised and built at table, but a living reality. She lives along the course of time by transforming herself, like any living being, yet her nature remains the same. At her heart is Christ," Benedict quoted Guardini.

"The church is awakening in souls," Benedict quoted Guardini again.

"Let us remain united, dear brothers, to this mystery, in prayer, especially in daily Eucharist, and thus serve the church and all humanity. This is our joy that no one can take from us," Benedict said.

The pope then said he would be close in prayer with the cardinals and would give "unconditional reverence and obedience" to the next pontiff.

The cardinals then lined up one by one to greet the pope personally. Most took his hand and kissed the gold fisherman's ring the pope wears as a symbol of the cardinals' obedience to the pope until his official renouncement Thursday evening.

Several cardinals knelt as they approached the pope, and some handed him letters or books. A few, like Filipino Cardinal Luis Tagle, whispered in his ear. Others took him by both hands, or smiled broadly as they briefly spoke.

While all 117 cardinals under the age of 80 are allowed by church law to take part in the conclave, two eligible cardinals have announced they are not coming -- one because of health issues, another following accusations he had inappropriate sexual contact with priests and a seminarian.

Jesuit Fr. Federico Lombardi, the Vatican spokesman, said Thursday the Vatican was not aware of any other cardinals who will not be able to make the conclave, though there are two others who are ill and may have difficulty.

Translating remarks by Lombardi at a press conference into English, Basilian Fr. Thomas Rosica described the process the Vatican will go through in the coming days to choose the next pope "an ancient and rich tradition in the church."

Rosica also said the Vatican will provide live video of the final moments of Benedict's papacy, showing when the Swiss Guards leave the pope's service outside the gates of Castel Gandolfo at the strike of 8 p.m.

Rosica also called Benedict's pledge of obedience to his successor "a very beautiful act of humility."

Several questions at the press briefing focused on problems that have plagued Benedict's papacy. One reporter asked if the Vatican would issue a statement of response to recent interviews by Australian Cardinal George Pell, who has said that while Benedict was a "brilliant teacher," church governance "wasn't his strong point."

"I don't think it's wise for us to comment on what the individual cardinals are saying," Rosica responded. "It's up to each cardinal to say or not to say such things."

Another reporter asked about a report in the Italian magazine Panorama that claimed the Vatican had undertaken an extensive video surveillance operation following the document leaks that eventually led to the trial of the pope's valet, Paolo Gabriele, in October.

"There's really no foundation to the article that appeared in Panorma of a surveillance operation," Rosica responded.

Thursday's meeting of the pope with the cardinals follows an usually personal address from Benedict at his last general audience Wednesday in St. Peter's Square.

Speaking to about 150,000 gathered there after touring the crowd in his popemobile, Benedict told the crowd the papacy had been a "great weight" on his shoulders.

It "was a part of the journey of the church that has had moments of joy and light, but also moments that were not easy," the pope said.

"I felt like St. Peter and the apostles in the boat on the Sea of ​​Galilee," Benedict went on.

"The Lord has given us many days of sunshine and a light breeze, the days when the fishing is plentiful. But there were also times when the water was rough ... and the Lord seemed to be sleeping."

After his renunciation of the papacy takes effect at 8 p.m., Lombardi said small seals will be placed on the papal apartment to ensure no ecclesiastical foul play.

[Joshua J. McElwee is an NCR staff writer. Editor Dennis Coday contributed to this story. McElwee is tweeting events from Rome at twitter.com/joshjmac.]