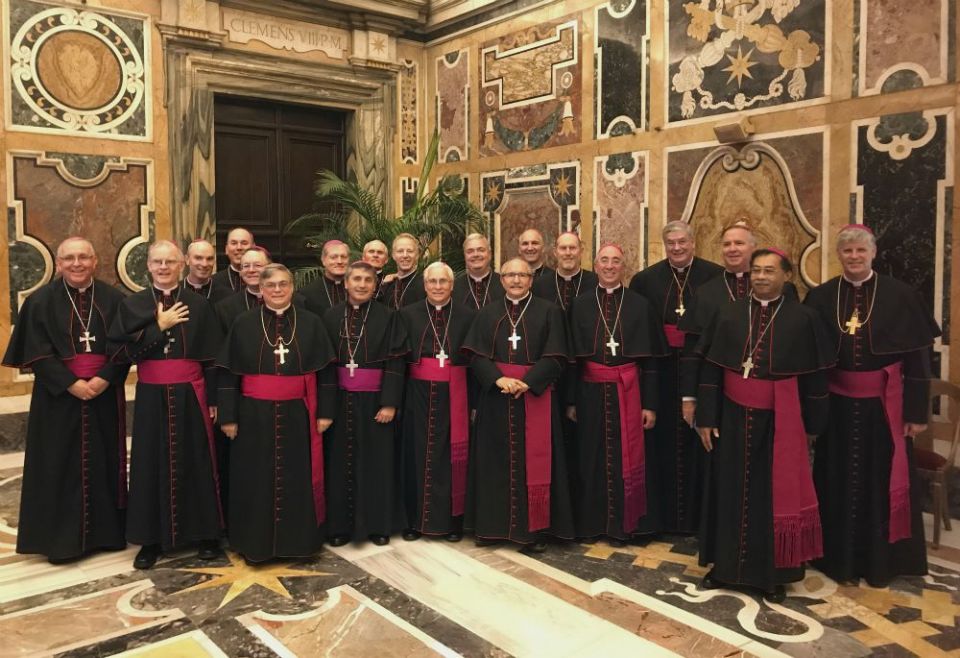 Twenty of the 21 U.S. bishops who attended the annual Vatican's "school for new bishops" pose for a photograph during a meeting with Pope Francis at the Vatican Sept. 14. (CNS/courtesy of Bishop William Wack)

Rome — Pope Francis told the newest class of bishops in the Catholic Church they should not consider themselves "self-sufficient 'Lord-fathers' " over their new dioceses but must instead seek to see how God is already speaking to the people they have been tasked to lead, and to respect their experience of the faith.

"The mission that awaits you is not to bring your own ideas and projects, nor abstract, invented solutions that treat the church like your own vegetable garden," the pontiff said in a meeting at the Vatican Sept. 14 with bishops he has named to posts around the world in the past year.

Francis told the new prelates their job is to "humbly — without attention-seeking or narcissistic behavior — offer your own concrete witness of union with God, serving the Gospel that is cultivated and helped to grow in that specific situation."

"I invite you ... to cultivate an attitude of listening, growing in the freedom to renounce your own point of view when it is shown to be partial and insufficient in order to assume God's point of view," the pope told the bishops.

"Commit yourself to knowing with your own eyes the places and the people, the spiritual and cultural 'tradition' of the dioceses entrusted to you, so that you can, with respect, bite into the memory of their witness of Christ and read their concrete present in the light of the Gospel," he suggested.

Francis was speaking Sept. 14 at the end of several days of meetings at the Vatican for priests appointed as bishops for the first time, hosted by the Congregations for Bishops and the Oriental Churches and commonly referred to as "new bishops' school."

The pontiff focused the core of his talk on the role of discernment in the life of a diocesan bishop. His address was marked by repeated requests for the new prelates to respect the opinions of the lay faithful in their dioceses, to seek their input in decision-making, and even implied the bishops' should be understanding when they might disagree with church teachings.

The pope told the bishops that they undertake their ministry as a part of the people of God, not as a person above the other Catholics in their dioceses.

"The bishop is called to live his own pastoral discernment as a member of the people of God, that is, in a dynamic that is always ecclesial, at the service of koinonia [fellowship or communion]," the pope continued. "The bishops is not the self-sufficient 'Lord father,' nor the feared and isolated 'solitary pastor.' "

"A bishop's discernment is always a communitarian action, which does not overlook the richness of the points of view of his priests and deacons, the people of God, and all who can offer him a useful contribution," Francis told the prelates.

The pope then quoted from the 6th-century monk Dorotheus of Gaza: "When you do not take into account your brother and you consider yourself superior to him, you end up swelling up against even God himself."

Francis said that undertaking discernment means having the qualities of both humility and obedience.

"Humility in respect to your own projects," said the pope. "Obedience with respect to the Gospel, the ultimate criterion; to the magisterium, which guards you; to the norms of the universal church, which serve you; and to the concrete situation of people."

"Discernment is a remedy for the immobility of 'it has always been done this way' or 'we'll take our time,' " said the pontiff. "It is a creative process that is not limited to applying strategies. It is an antidote against rigidity because the same solutions are not valid everywhere."

"[Discernment] is always the everlasting today of the risen one who asks us not to resign ourselves to repeating the past and to have the courage of questioning if our proposals from yesterday are still evangelically valid," he continued.

The pope told the new bishops to "not let yourselves be imprisoned by the nostalgia of having a single response to apply in every case."

"That might calm our performance anxiety but it would leave us relegated to leading marginal and 'dried-up' lives," he said.

Francis ended the address with a citation from his 2016 apostolic exhortation Amoris Laetitia ("The Joy of Love") on the role of bishops in forming and not imposing consciences on the lay faithful.

"We must force ourselves to grow into an inclusive and incarnate discernment, which dialogues with the consciences of the faithful — that are to be formed and not replaced in a process of patient and courageous accompaniment," the pontiff told the new bishops.

"The activity of discerning is not reserved to the wise, the insightful or the perfect," said the pope. "Authentic discernment ... is a process that is always open."

Discernment, said Francis, "does not reduce itself to the repetition of formulas that 'like high clouds release little rain' to the concrete person, [and] are often immersed in an inflexible reality of black and white."

"The pastor is called to make available to the flock the grace of the Spirit, which knows how to penetrate the folds of reality and take account of its hues and shades to make emerge what God wants to realize in every moment," the pope said.

The Rite of Christian Initiation of Adults works, but only if we change