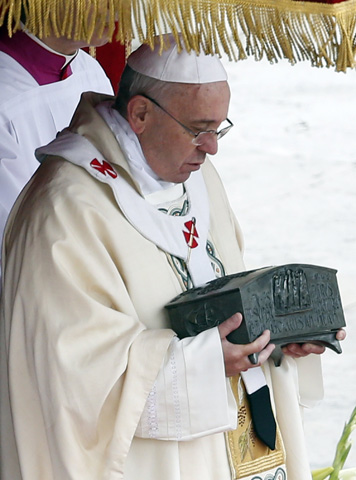 Pope Francis holds a bronze reliquary containing the relics of St. Peter the Apostle on the altar Mass Sunday in St. Peter's Square at the Vatican. (CNS/Reuters/Stefano Rellandini)

Pope Francis closed the Year of Faith by calling on people to keep Christ at the center of their lives, especially in times of trouble.

"When Jesus is at the center, light shines even the darkest moments of our lives; he gives us hope," he said in his homily Sunday, the feast of Christ the King.

Eight bone fragments, each two to three centimeters long, were nestled in an open bronze reliquary displayed to the side of the altar.

During the ceremony, the pope -- the 265th successor of Peter -- held the closed reliquary for several minutes in silent prayer while choirs sang the Nicene Creed in Latin.

The bones, which were discovered during excavations of the necropolis under St. Peter's Basilica in the 1940s, are kept in the pope's private chapel but had never been displayed in public.

While no pope has ever declared the bones to be authentic, Pope Paul VI said in 1968 that the "relics" of St. Peter had been "identified in a way which we can hold to be convincing."

Pope Francis began his homily by thanking retired Pope Benedict XVI for establishing the Year of Faith, calling it a "providential initiative" that gave Christians "the opportunity to rediscover the beauty of the journey of faith begun on the day of our baptism."

The pope then greeted patriarchs and archbishops of the Eastern Catholic churches, who were in Rome for a meeting, and extended those greetings to all Christians living in the Holy Land, Syria and the East, wishing "them the gift of peace and harmony."

He expressed his appreciation for their fidelity to Christ, which comes "often at a high price."

"When this center is lost, because it is replaced with something else, only harm can result for everything around us and for ourselves," he said.

Reflecting on the day's Gospel reading of the good thief, who was crucified alongside Jesus, repents and asks Jesus to remember him in paradise, the pope said Jesus responds to the man with forgiveness, "not condemnation."

"Whenever anyone finds the courage to ask for this forgiveness, the Lord does not let such a petition go unheard."

The pope said everyone should ask the Lord to remember them because "each one of us has a history," has made mistakes and sinned as well as experienced happy times and sad.

People need to say, "'Jesus, remember me because I want to be good, I have the desire to become good, but I don't have the strength. I can't, I'm a sinner,'" the pope said. In response, "the Lord always grants more than what he has been asked."

With an estimated 60,000 people gathered in the square for the Mass, a special collection was taken up for victims of super Typhoon Haiyan in the Philippines.

At the end of the Mass and before reciting the Angelus prayer at noon, the pope formally presented his first apostolic exhortation to representatives of the church community, including bishops, seminarians, catechists, Catholic journalists and a woman with a visual impairment, who received her copy as an audio file on a CD.

The document on evangelization, titled "Evangelii Gaudium" ("The Joy of the Gospel"), is to be released to the public Tuesday.

In a meeting Monday with people who volunteered their time and efforts to organize and promote Year of Faith activities, Pope Francis said, "the faith is the cornerstone of the Christian experience because it drives the choices and actions of our daily life."

"Faith in Christ is able to warm hearts, truly becoming the driving force of the new evangelization," he said.

A faith "lived deeply and with conviction" spreads the proclamation of the Gospel far and wide, but "apostolic courage" also is needed to reach people where they are, especially in very difficult places.

Before closing the Year of Faith, Pope Francis presided Saturday over the Rite of Acceptance, marking the moment when some 500 men and women, from 47 countries, inquiring about the Catholic faith formally became catechumens preparing for baptism at Easter.

During a Liturgy of the Word in St. Peter's Basilica, the pope told the adult catechumens that it is always God who initiates relationships with people and that he patiently and perseveringly waits for a response. "He never draws away from us, but has the patience to wait for the favorable moment to meet each of us."

Believing "is walking with Jesus. It's a journey that lasts a lifetime," Pope Francis told the catechumens. "Obviously, in this journey there will be moments when we feel tired and confused. However, faith gives us the certainty of the constant presence of Jesus in every situation, including the most painful and difficult to understand."