by Joshua J. McElwee
Vatican
World
This article appears in the Francis in the Baltics feature series. View the full series. 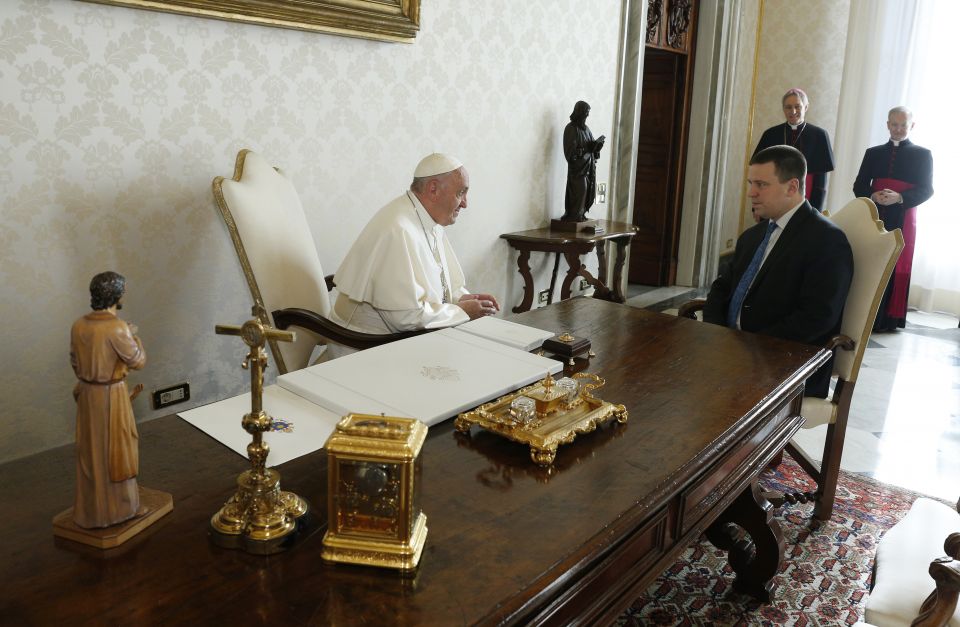 Pope Francis talks with Juri Ratas, prime minister of Estonia, during a private audience at the Vatican Feb. 9. They will meet again during the pope's visit to the Baltics later this month. (CNS photo/Paul Haring)

Church leaders in the Baltic states are expressing hope that Pope Francis' late September visit to the region will provide a boost of encouragement to the countries at the far, northeastern edge of Europe as they continue to deal with social renewal nearly three decades after emerging from Soviet control.

Experts abroad are also optimistic that the presence of such a high-profile western religious leader might send a message to current Russian leadership about the three nations' ties to the west, four years after the illegal Russian annexation of Ukraine's Crimean peninsula.

"The pope's visit to those countries confirms their western identity," said Declan Murphy, a former director of the U.S. bishops' office of aid to the church in Central and Eastern Europe.

"At a time when the White House is making threats about walking away from NATO, I think the pope's presence visiting these countries symbolically will once again confirm their connection as part of Western Europe," said Murphy, referring to U.S. President Donald Trump's frequent threats to leave the international North Atlantic Treaty Organization.

Francis will be visiting Lithuania, Latvia and Estonia Sept. 22-25. Each of the countries, located as a bloc on the Baltic Sea immediately northeast of Poland and west of Russia, is a former part of the Soviet Union and now a NATO member.

Heather Conley, a senior vice president for Europe, Eurasia and the Arctic at the Center for Strategic and International Studies, said Trump has been "questioning" the values stressed in the past 70 years of U.S. foreign policy.

Any words Francis might make during his visit "on security and the right to protect the Baltic States … would be very welcome," said Conley, who served from 2001-05 as a deputy assistant secretary of state.

"Obviously, any words in that way would be very powerful," she said.

The September visit will be Francis' 25th abroad, and represents a rather dramatic change of pace for the pontiff after an Aug. 25-26 trip to Ireland drew global attention over the Catholic Church's history of clergy and institutional abuse in that country.

The Baltics trip could be something of a return to diplomatic form for the pope: a visit to countries that could be considered "on the periphery," and with diverse religious expression.

While Lithuania, the southernmost of the three countries, has a Catholic community numbering about 77 percent of its 2.8 million population, Catholics are in the minority in the other two nations.

Lithuanian Bishop Kęstutis Kėvalas said that by making the visit to the Baltic States, Francis is "truly following his own guidelines to go to the peripheries." Kėvalas, who was appointed by Francis in 2017 to lead the small diocese of Telšiai in the nation's northwest, called Lithuania "the country between west and east."

"We are very appreciative that he is coming to us," he said. "That means for us that he knows about us and also wants to strengthen us."

Fr. Pauls Kļaviņš, the administrator of St. James' Cathedral in Riga, Latvia, said he thought Francis' visit to his country would help renew its ties to Western Europe and give encouragement to its small Catholic community.

Kļaviņš also expressed hope that the pope might give backing to efforts at dialogue between opposing pro-European and pro-Russian communities in the country.

He said that issues surrounding Latvia's relationship with Russia are "very heated and politicized," and hopes Francis will "bring up the question of dialogue, that there has to be dialogue among different parties, different cultural groups."

The only other pope to visit the Baltic states was John Paul II, who came in 1993, less than two years after the final fall of the Soviet Union.

Kėvalas, who is a native of Lithuania's former capital of Kaunas, said that while John Paul II's visit led to an "extraordinary experience of unity and inspiration" there has been a "slow-down in spirit" since.

"We hope that Francis' visit will enliven again our spirit and strengthen again our convictions in faith and in following the path of freedom," he said.

Kļaviņš, who also serves as a professor at Latvia's inter-diocesan seminary, stressed that his country has changed dramatically in the intervening years since John Paul II's visit.

"Twenty-five years ago, people were still at the height of the freedom experience," he said. "Now, they are coming to grips with the reality of the global economy, and the reality of financial instability."

"It's more difficult than 25 years ago to discern what is really essential, what is essential in terms of Christian choices, human choices, life choices," he said.

Francis may choose to address such issues at different points during his visit, and perhaps most specifically during his separate meetings with each nations' political leaders.

Upon landing in the Lithuanian capital of Vilnius from Rome Sept. 22, the pope will meet with President Dalia Grybauskaite and Prime Minister Saulius Skvernelis. He will stay in the country Sept. 23, traveling back and forth about 60 miles to Kaunas, where he will say a public Mass and meet with priests and religious.

Francis will stay the next night in Vilnius, but travel back and forth Sept. 24 to Latvia, and then leave Lithuania Sept. 25 for a day-visit to Estonia before returning to Rome that evening.

In Latvia, the pope will meet in the capital of Riga with President Raimonds Vejonis and Prime Minister Maris Kucinskis before traveling to the rural eastern village of Aglona for a pilgrimage and public Mass at the Basilica of the Assumption, considered the country's Catholic spiritual center.

In Estonia, Francis will meet with President Kersti Kaljulaid and Prime Minister Juri Ratas in the capital of Tallinn, before closing his visit with a public Mass there.

Kėvalas said he hoped Francis would speak to the Lithuanian authorities about being "more involved" in the project of European unity.

"We could play a bigger part in Europe, and maybe in the world, trying to be more courageous, thinking about the values of Christian and western living," he said. 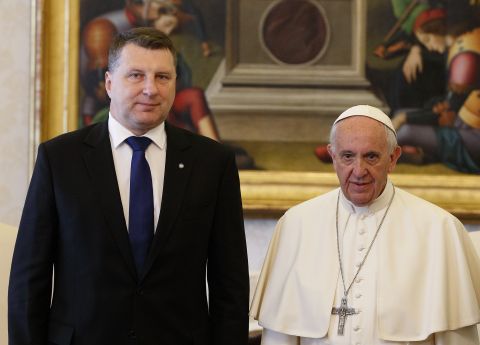 Pope Francis poses with Latvia's President Raimonds Vejonis during a private audience at the Vatican June 2. They will meet again during the pope's visit to the country on Sept. 24. (CNS photo/Paul Haring)

Murphy, who left his role at the bishops' conference in 2016, said he hoped that Francis might also talk about Catholic social teaching and his 2015 environmental encyclical "Laudato Si', on Care for Our Common Home" in his meetings with the leaders of the Baltic states and their Catholic communities.

"The pope will come and lend his forceful presence, and I hope encourage the episcopacy there to be more active in pursuing the dissemination of Catholic social thought and the messages from the Holy Father's encyclicals," said Murphy.

There will be two ecumenical events during Francis' four-day visit: a prayer in Riga Sept. 24, and an ecumenical meeting with young people in Tallinn Sept. 25.

The prayer service is expected to be the more substantial of the two, as the Catholic and Orthodox populations are nearly evenly split in the country, with a 2015 E.U. Commission survey estimating the nation to be about 26 percent Catholic and 24 percent Orthodox.

Paulist Fr. Ronald Roberson, associate director of the U.S. bishops' secretariat on ecumenical and interreligious affairs, said he thought the prayer would be "interesting to watch" as the Latvian Orthodox Church is under the jurisdiction of the Patriarchate of Moscow.

Noting that Francis was the first pope to meet Moscow Patriarch Kirill in 2016, Roberson said he thought that meeting might "improve the situation" between Catholics and Orthodox in Latvia.

Kėvalas noted that the timing of Francis' second day in Lithuania also coincides with the 75th anniversary of the Sept. 23, 1943, Nazi massacre of Jewish people in the country, now commemorated each year as the National Day of Remembrance of the Genocide of the Jews.

Francis will mark the occasion on the afternoon of Sept. 23 by stopping to pray at a monument to Jewish victims at a former ghetto in Vilnius.

"It's very symbolic that the pope will also pay respect to the Jewish people when he stops by the site of the ghetto," said Kevalas.

"In this way, he will also give the message to the world that we need to remember this tragedy … and that we need to be more sensitive to other faiths and other peoples, in order that this would not happen again," he said.