Editor's note: This story was updated April 11 at 12:25 p.m. CDT, to include reporting on responses from Cardinal Joseph Tobin and Voice of the Faithful to the Association of U.S. Catholic Priests' statement. 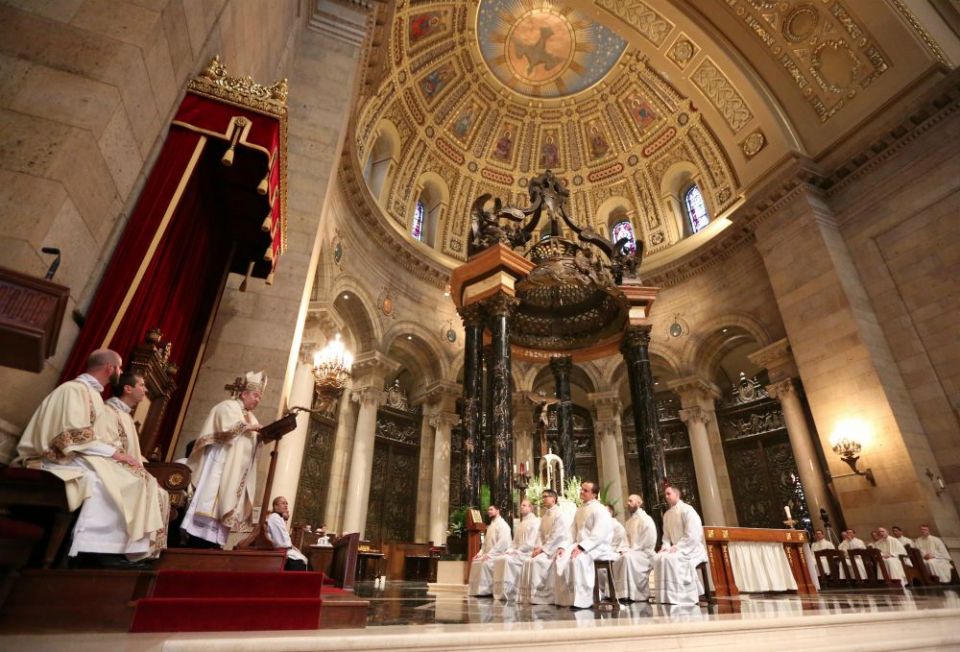 Archbishop Bernard Hebda of St. Paul and Minneapolis addresses the nine men about to be ordained to the priesthood during their ordination Mass May 2016 at the Cathedral of St. Paul in Minnesota. (CNS/ The Catholic Spirit/Dave Hrbacek)

The Association of U.S. Catholic Priests has called on the U.S. bishops to assure that teachings of the Second Vatican Council become the bedrock of U.S. priestly formation programs, not "little more than an historical footnote" or "a distortive moment in the Church's pilgrimage through time."

On March 29, the national group released the text of a 5,000-plus-word statement outlining "five overriding concerns" about priestly formation. The document and an explanatory letter were sent to Cardinal Joseph Tobin of Newark, New Jersey, in late January.

Tobin chairs the U.S. bishops' Committee on Clergy, Consecrated Life and Vocations, which is overseeing revision of the Program of Priestly Formation for U.S. seminaries, part of a global effort mandated by the Vatican.

Titled "Preparing the Sixth Edition of the Program of Priestly Formation: Five Overriding Concerns," the priests' association declaration argues that "in-depth revision" must be made in priest formation to meet "the significant challenges facing the church in the United States."

Those challenges, the document asserts, include:

The five focus areas of the document — each with observations, concerns and proposals — are:

On April 9, the priests' organization received a letter from Tobin, dated April 3, "offering thanks for the priestly formation document" as well as declining the group's invitation to speak at the group's 2019 assembly in St. Louis, AUSCP spokesman Paul Leingang told NCR April 10.

In an email, Leingang said Tobin wrote: "I would also like to take this opportunity to express my thanks for the white paper submitted to the Secretariat for Clergy, Consecrated Life and Vocations, providing observations of the current Program for Priestly Formation, Fifth Edition, and the new Ratio Fundamentalis Institutionis Sacerdotalis: The Gift of the Priestly Vocation. The comments expressed were brought to the attention of the working group for the Program of Priestly Formation, Sixth Edition."

The AUSCP statement underscores that "the pastoral values of Vatican II need to permeate and be consistently and persistently affirmed" and that these "values should serve as the basis and of all phases of priestly formation."

Key Vatican II tenets emphasized include "grounding in the Scriptures, conversion of heart in a personal relationship with Jesus Christ, the church as the People of God, the universal call to holiness, the central role of the laity, vernacular worship, the church's mission to the world, dialog and consensus building, subsidiarity, and ecumenical-interfaith-interreligious commitment."

Among comments and suggestions within the document are:

The sixth edition of the U.S.-focused Program of Priestly Formation is expected to be submitted for approval at the bishops' general assembly in November 2019.

The Association of U.S. Catholic Priests (AUSCP) "who worked together in writing the document have decades of experience in seminary teaching and administration as well as in parish ministry and chaplaincies" along with "advanced degrees and many years in seminary education and formation," it stated in a March 29 press release.

Fr. Ronald Chochol, a priest of the St. Louis Archdiocese and former Sulpician*, chaired the team and signed the letter to Tobin along with Fr. Bernard "Bob" Bonnot of the Youngstown, Ohio, Diocese who heads the AUSCP leadership team, and five others who worked on the priest formation document.

According to Bonnot, the effort to address priest formation surfaced at the organization's national assembly last June in Atlanta.

"When it was announced that the Vatican was requiring this, it was proposed to our 2017 assembly that we should contribute to the process," Bonnot told NCR via email.

"To my surprise," he continued, "it was not only endorsed by the assembly, but selected as one of our top three priorities for the year. A working committee was established. It worked diligently and came up with the report at the end of January."

Early response to the AUSCP discourse, Chochol and Bonnot emailed jointly, has been "universally positive, enthusiastic even, and grateful that someone is speaking up and saying what we have recommended, especially since the 'someone' is priests … with seminary teaching experience."

Voice of the Faithful, an organization of progressive Catholics, endorsed the AUSCP statement in an April 11 news release.

Bonnot said he was "surprised" that the "project and process" of updating the priestly formation system "seem to be very low profile."

The AUSCP "was not asked to participate," he said. "We are not aware of whom has been asked. It has been hard to learn much at all about the process."

Request for comment from Tobin through the Newark Archdiocese's communication office had not been acknowledged by press deadline.

Fr. John Kartje, however, the rector/president of one of the largest U.S. seminaries, lauded the intent and spirit of the AUSCP statement.

Although not familiar with the AUSCP, Mundelein Seminary's Kartje said, "I definitely share the sense that this is a unique time for the seminary system worldwide, and there is a strong tone in the new Ratio Fundamentalis that there is an ability to really add on" to its direction.

In late 2016, the Vatican Congregation for the Clergy issued a document on priesthood, Ratio Fundamentalis Institutionis Sacerdotalis ("The Gift of the Priestly Vocation").

Kartje said he had not "gone through the [AUSCP] document with a fine-toothed comb," but supported its emphasis on pastoral education of priests at the grass-roots level, describing parish-based experience as "a key piece of formation."

Mundelein and other major seminaries, he said, are increasingly developing "partnerships with parishes" and other real-life outreach ministries "where men are receiving a significant amount of formation through exposure and work with parishes, working with men and women, ordained and lay." 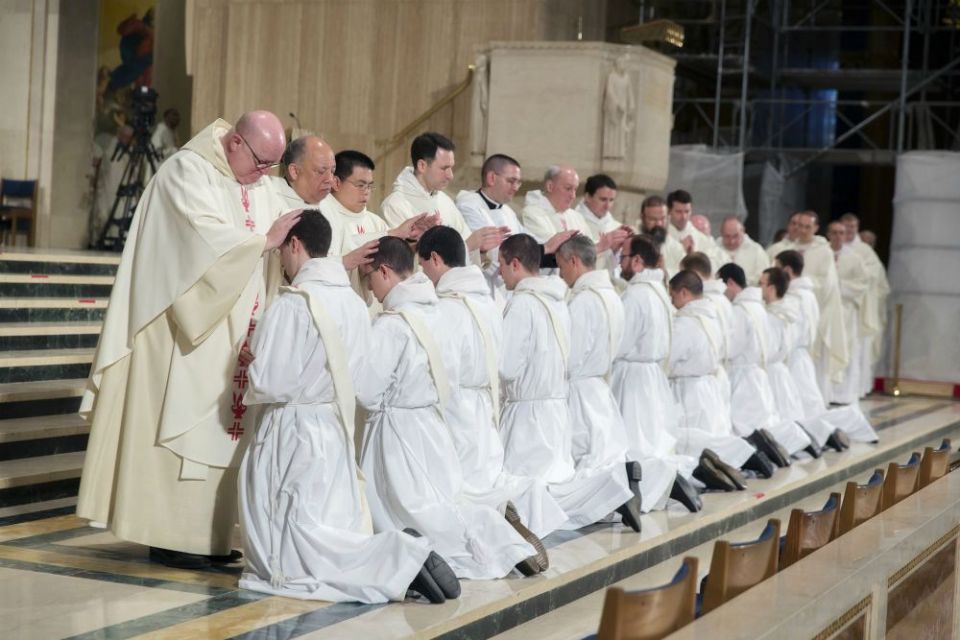 Eleven men are ordained as priests in the Dominican order during a May 2016 Mass at the Basilica of the National Shrine of the Immaculate Conception in Washington. (CNS/Catholic Standard/Jaclyn Lippelmann)

It was not clear to him, Kartje said, to what degree the AUSCP authors were up to speed on such developments in U.S. seminary programs.

Similarly, he said, modern U.S. seminaries do significantly employ behavioral sciences in evaluating and educating seminarians, which seems to support the AUSCP call for a robust evaluation of psychosexual formation.

The AUSCP charged: "Priestly formation programs do not adequately engage experienced professionals, both men and women, who can speak comfortably, are aware of realistic and wholesome human sexual expression and can assist candidates in their personal and honest understanding of their sexuality."

The current Program of Priestly Formation "proposes that preparation for celibacy is one of the primary aims of the human formation program," the AUSCP statement says. "We consider this section of the current PPF an Achilles' heel of the Human Formation section and of the entire document. The seminary faculty needs to guard against judging that they have the power by themselves to 'manufacture' psychosexual development. Avoidance, superficiality and coercion do not create an environment for the 'discernment of spirits' by either the candidates or the formation faculty."

Kartje indicated that the AUSCP and major U.S. seminaries might be on the same page when it comes to thorough, standardized training for persons to be effective counselors and formation directors.

Recently, he said, several major seminaries joined to form a council that will, among other things, serve as a kind of school for "formators," persons who work in various aspects of evaluation and formation of priesthood candidates.

*This story was updated to correct that Fr. Ronald Chochol is a former Sulpician​.

A version of this story appeared in the May 4-17, 2018 print issue under the headline: Priests' group wants significant change in priest formation process .