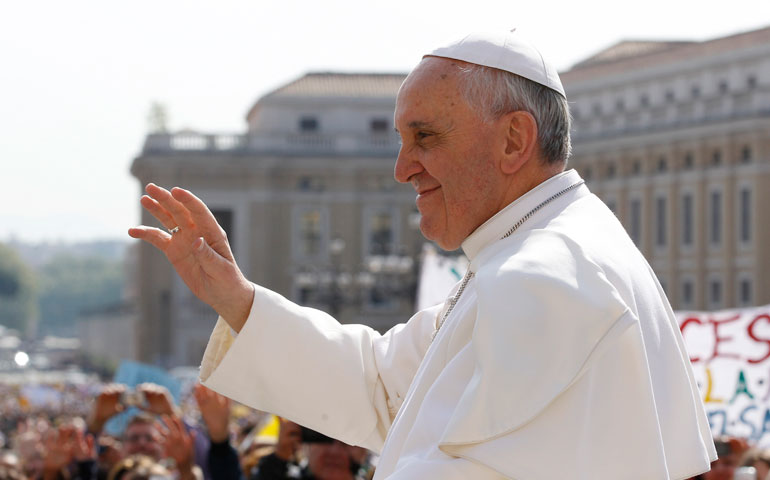 Pope Francis waves as he arrives to lead his general audience in St. Peter’s Square at the Vatican April 24. (CNS/Paul Haring)

More than a month into the Francis era, it's still easier to talk about the much-ballyhooed reform of the Vatican expected under this outsider pontiff in aspirational terms than at the level of concrete developments.

Those who know the pope say these aims are consistent with the managerial style Jorge Mario Bergoglio has displayed over a lifetime of leadership as a Jesuit provincial, bishop and archbishop. They're also, of course, the heart of what the other 114 cardinals believed they were voting for when they elected him.

Over and over, cardinals heading into the March conclave said they wanted a break -- not from the substance of recent papacies, but from entrenched methods of management. Historically speaking, one would arguably have to go back a century, or more, to find such a self-consciously anti-establishment papal election.

The hard question now is how these aims will be translated into structures and personnel.

The most noteworthy step Francis has taken to date was the April 13 announcement of a new group of eight cardinals, plus one bishop-secretary, to advise him on "the government of the universal church" and to study a reform of Vatican systems. Its coordinator is Cardinal Oscar Rodríguez Maradiaga of Honduras, a longtime champion of church teaching on social justice, and its American member is Cardinal Sean O'Malley of Boston.

Beyond that, several other reform concepts are making the rounds in Rome, all with the status of hypotheses for the moment. Whether any individual suggestion comes to fruition, collectively they illustrate the sense that change is in the air.

Italian Cardinal Francesco Coccopalmerio, president of the Pontifical Council for Legislative Texts, has floated the idea of appointing a new "moderator of the Curia," analogous to a position that already exists in many dioceses. The idea would be not only to make sure the various offices of the Vatican have the resources they need, but also to promote better coordination.

In part, the proposal responds to frequently voiced complaints in recent years about mixed signals.

Some observers, for instance, say that the Congregation for the Doctrine of the Faith sometimes has taken a more aggressive line on the sexual abuse scandals than the Congregation for the Clergy; that the Pontifical Council for Justice and Peace has voiced positions on political questions that don't exactly line up with the diplomatic stance of the Secretariat of State; and that the Vatican's various communications outlets, including the Holy See Press Office, L'Osservatore Romano and the Pontifical Council for Social Communications, sometimes strike different notes.

In theory, Coccopalmerio's proposal could address those perceived inconsistencies by empowering a "chief of staff" to enforce consistency.

It's not a slam dunk, however, because some Vatican veterans argue that the duties of a moderator of the Curia already naturally belong to the sostituto, or "substitute," in the Secretariat of State. With a strong figure in that role, they say, there would be no need for another layer of bureaucracy.

Another idea making the rounds is to consolidate the Vatican's various financial offices, including the Prefecture for Economic Affairs of the Holy See, the Administration of the Patrimony of the Apostolic See, and the government of the Vatican City-State, into a new "third section" with the Secretariat of State.

At the moment, the Secretariat of State includes two sections -- the first for internal church administration, and the second for diplomatic relations and foreign policy. The idea of creating a third section for financial administration would be to impose greater uniformity, especially in the direction of transparency.

The proposal was first reported on April 25 by the Italian daily Corriere della Sera, and it responds to concerns about financial administration that were most recently raised amid the "Vatileaks" affair. Confidential documents contained charges of corruption and cronyism in Vatican finances, and cardinals speaking on background said they asked for a comprehensive review of Vatican finances during the general congregation meetings leading up to the recent conclave.

Critics, however, note that the Prefecture for Economic Affairs was created in 1967 precisely to play the coordinating role that's now being suggested for a new third section -- wondering if the simpler solution isn't to have that office live up to its original billing.

Also on the financial front, there's been speculation that Francis might be contemplating closing the Institute for the Works of Religion, better known as the Vatican Bank. With assets estimated at roughly $7 billion, the bank has occasionally been a source of scandal and controversy, and concerns about its supervision were flagged in a recent analysis by the Council of Europe's anti-money-laundering agency.

In a mid-April interview with NCR, Federico Wals, who served as spokesman for Bergoglio in Buenos Aires, floated the possibility of phasing out the Vatican Bank. Wals noted that when Bergoglio took over the archdiocese, he sold off its ownership shares in local banks and transferred the church's funds into private banks "as a normal client." He predicted that Francis might take the same step as pope.

That speculation seemed to get a boost on April 24, when Francis celebrated a Mass in the Domus Sanctae Marthae for employees of the Vatican Bank, telling them "offices are necessary … up to a certain point."

Veteran Italian journalist Andrea Tornielli has reported, however, that closing the bank isn't presently under consideration. Instead, he suggested, the new pope will press the bank and other financial offices to move in the direction of "a more rigorous control of expenses and a sense of austerity."

Francis has already sent a clear signal in that direction by deciding not to dole out the usual bonuses Vatican personnel receive in the aftermath of a papal transition, which eight years ago came to almost $2,000 per employee.

In terms of personnel, the most important looming decision is the choice of a new secretary of state to replace Cardinal Tarcisio Bertone, seen by many as a symbol of the managerial breakdowns during the Benedict years.

The move may not come for a while. Bertone is scheduled to travel to Santiago de Compostela in Spain on May 27 for the episcopal consecration of the new No. 2 official in the Congregation for Institutes of Consecrated Life and Societies of Apostolic Life, Franciscan Fr. José Rodríguez Carballo, and most observers believe Bertone will do so as the secretary of state.

While the outlines of the "Franciscan reform" remain to be fleshed out, one of the pope's old friends predicts they'll have a key feature: Jesuit Fr. Miguel Yáñez says they'll be the fruit of wide consultation.

Yáñez, who heads the faculty of moral theology at Rome's Gregorian University, was in Jesuit formation under Bergoglio in Argentina in the 1970s and 1980s, and is among the friends the pope has reached out to by phone since his election. Yáñez spoke to NCR in an April 22 interview.

"Above all, he's a person of dialogue," Yáñez said of Francis. "I think all the various sectors of the church will be able to dialogue with him."

A version of this story appeared in the May 10-23, 2013 print issue under the headline: Proposals abound for a ‘Franciscan reform’ of the Vatican.