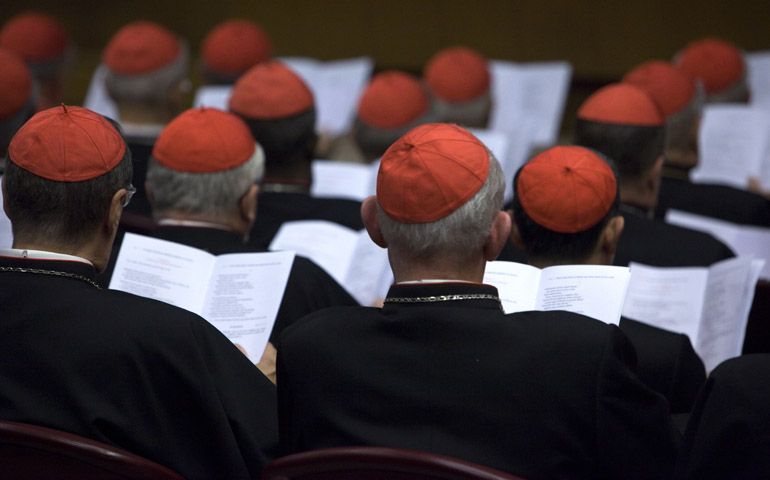 Cardinals gather Monday in the Synod Hall at the Vatican for the consistory of the canonizations of Giuseppe Vaz and Maria Cristina dell'Immacolata Concezione. At the consistory, Pope Francis also discussed the Middle East. (CNS/Maria Grazia Picciarella, pool)

Vatican City — The Middle East, especially Iraq and Syria, are experiencing "terrorism of previously unimaginable proportions" in which the perpetrators seem to have absolutely no regard for the value of human life, Pope Francis said.

"It seems that the awareness of the value of human life has been lost; it seems that the person does not count and can be sacrificed to other interests. And all of this, unfortunately, with the indifference of many," he said during a special meeting at the Vatican on the Middle East.

The pope met Monday with cardinals gathered for an ordinary public consistory to approve the canonization of new saints, and to discuss the current situation in the Middle East.

The pope announced during the Oct. 5-19 extraordinary Synod of Bishops on the family that he would include a discussion on the Middle East at Monday's consistory in order to let the region's seven patriarchs, who were taking part in the synod, also attend the proceedings. It was the second such high-level summit the pope convened at the Vatican; the first was an Oct. 2-4 meeting of the region's apostolic nuncios and top Vatican officials.

Pope Francis told those gathered that in the wake of the closing of the extraordinary synod that he wanted to focus attention on "another issue that is very close to my heart, that is, the Middle East, and in particular, the situation of Christians in the region."

"Recent events, especially in Iraq and Syria, are very worrisome," he said.

"We are witnessing a phenomenon of terrorism of previously unimaginable proportions. Many of our brothers and sisters are persecuted and have had to leave their homes, in a brutal manner, too."

"This unjust situation demands, beyond our constant prayers, an adequate response from the part of the international community as well," he said.

The church is united in its "desire for peace and stability in the Middle East and the desire to promote the resolution of conflicts through dialogue, reconciliation and political efforts," he said.

However, "at the same time, we want to offer the Christian communities the most help possible to support their presence in the region," he said.

As hundreds of thousands of Christians have been forced to flee because of increased violence, "We cannot resign ourselves to imagining a Middle East without Christians, who for 2,000 years have been professing the name of Jesus."

The pope said he was certain the day's meeting would produce "valuable reflections and suggestions to be able to help our brothers and sisters who suffer and also to respond to the tragedy of the decreasing Christian presence in the land where Christianity was born."

Lebanese Cardinal Bechara Rai, Maronite patriarch, was among the seven patriarchs representing the Latin-rite and Eastern Catholic churches at the meeting.

The cardinal said the pope's concern and calls for coordinated action represent "real moral support, but also real diplomatic support because the Holy See also has its role, its important influence on an international level," he told Vatican Radio on Sunday.

Just as the Vatican has endorsed sanctioned force according to international law in order to stop unjust aggression, Rai said, something must be done to stop the violence.

"It is not possible that in the 21st century we have reverted to primitive law, where an organization shows up, uproots you from your home and your land, and says, 'You are out of here,' and the international community watches -- inert and neutral. It is not possible."

When the church says the international community has a responsibility to act and do something to stop the violence, he said they are not pointing to some nameless entity, but rather specifically to "the United Nations, the [U.N.] Security Council and the International Criminal Court" to take on their responsibilities.

"They must act, otherwise where do we go? The United Nations loses its reason to exist. This assembly of nations was created to protect peace and justice in the world, right? However, now it has become a tool in the hands of the great powers. It is impossible to accept that."

Cardinal Pietro Parolin, the Vatican's secretary of state, told the assembly Monday that the United Nations must act "to prevent possible and new genocides and to help the numerous refugees."

While it is licit to use force within the framework of international law to stop unjust aggression and protect people from persecution, he said it is clear that a complete resolution of the problems in the region cannot be found in "just a military response."

In his talk, which was a summary of the Oct. 2-4 meeting with Vatican diplomats and officials, the cardinal said the international community also "must go to the root of the problems, recognize past mistakes" and work to promote peace and development in the region.

Experience has shown that "war, instead of dialogue and negotiations, increases suffering," the cardinal said in his lengthy talk.

Violence only leads to destruction, he said, so the first, most urgent step is for all sides in the Middle East "to lay down their arms and talk."

To help bring stability to the region, long-lasting and just political solutions must be found for the Israeli-Palestinian conflict, he said. The international community should also improve its relations with Iran to help in the resolution of the crisis in nearby Iraq and Syria, he added.

When it comes to the so-called Islamic State, he said, focus must be on who is supporting them, not just politically but also through "illegal trade of petroleum and the supply of arms and technology."

Muslim leaders have a responsibility to denounce the religious claims of the Islamic State and "to condemn the killing of others for religious reasons and every kind of discrimination."

"It is a moral obligation for everyone to say enough to so much suffering and injustice and to begin a new journey" where everyone has a role and rights as citizens in building up their country and its future, he said.

On the Middle East, Trump sounds like a statesman