Trump to visit Francis at the Vatican May 24 after trip to Israel, Saudi Arabia 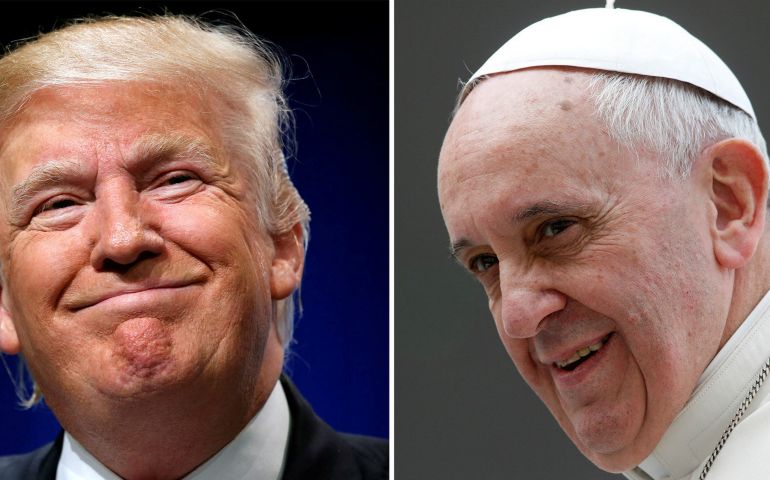 U.S. President Donald Trump and Pope Francis are seen in this composite file photo. The two leaders are scheduled to meet at the Vatican May 24. (CNS photo/Reuters)

Rome — U.S. President Donald Trump will visit with Pope Francis at the Vatican on May 24, as part of his first foreign trip since taking office, after making visits to Israel and Saudi Arabia.

The Vatican announced the meeting late in Rome on May 4, saying in a brief statement that Trump will also meet that day with the Vatican's Secretary of State Cardinal Pietro Parolin.

Announcement of the visit ends weeks of speculation over whether Trump, due to be in Italy for a May 26-27 summit of G7 leaders, would request a meeting with the pontiff. While it has become normal for U.S. presidents to meet popes, reports in early April indicated the president was not interested in such an encounter.

The May 24 meeting is scheduled for 8:30 a.m., an unusually early time for Francis to meet with a head of state. Such meetings are normally held in mid-morning.

On a background briefing about the trip, a senior administration official said the White House had arranged Trump's trip to Saudi Arabia, Israel and then the Vatican "to bring together all the different religions in the fight against intolerance."

Francis and Trump are known to have divergent opinions on a number of issues. The two famously had a somewhat tense exchange in February 2016, while Trump was campaigning to become the Republican Party’s nominee.

In advance of Francis' trip to Mexico that month, Trump criticized Francis as "a very political person" because the pontiff was preparing to celebrate a public Mass on the southern side of the U.S.-Mexico border.

When the pope was asked about that remark and Trump's plans to build wall along the entire border during a press conference on the flight back to Rome, Francis questioned Trump's Christianity, saying: "A person who thinks only about building walls, wherever they may be, and not building bridges is not Christian."

Asked about the possibility of meeting with Trump in May on the flight home from his trip to Egypt last week, Francis said: "I receive every head of state who asks for an audience."

Trump will conclude his first foreign trip as president with stops at a NATO meeting in Brussels May 25 before taking part in the G7 summit, to be held in Taormina, Sicily.

Among the areas where Francis and Trump would appear to disagree is on protecting the environment.

Francis has made environmental protection a central focus of his papacy, writing an encyclical in 2015, "Laudato Si': On Care for Our Common Home," that partly focused on the need to confront climate change.

Trump has appointed an EPA administrator who questions the wide scientific consensus about climate change, and he signed an executive order in March that withdrew a wide array of Obama-era environmental protections.

The first president to meet a pope at the Vatican was Woodrow Wilson, who met Pope Benedict XV in 1919. Every president since Dwight Eisenhower has made the trip.

Once Trump and Francis meet May 24, little information will likely be made available to the public about their discussions. The Vatican normally releases only brief descriptions about the pope's meetings with world leaders, outlining very broad topic areas that were part of the conversations.

Focus among journalists is normally given to the length of the encounters, with meetings that reach beyond 20 or 30 minutes considered unusual. There is also normally a chance to note the demeanor of the leaders as they exchange gifts with one another.

Vatican | Trump to visit Francis at the Vatican May 24 after trip to Israel, Saudi Arabia