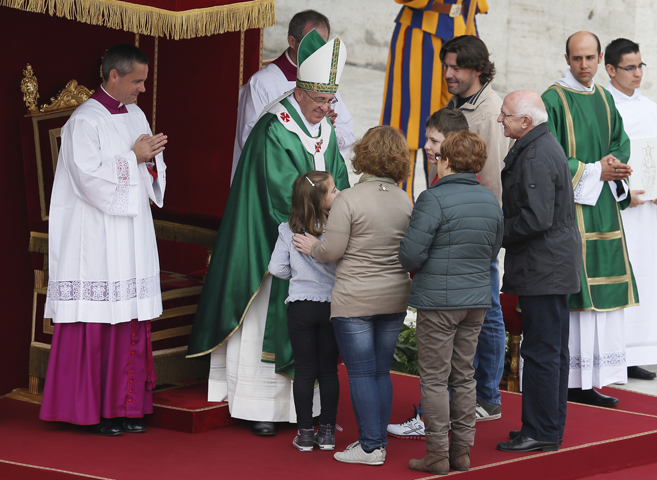 Pope Francis greets a family as they present the offertory gifts during a Mass for families Oct. 27 in St. Peter's Square at the Vatican. The Mass was the culmination of the Year of Faith pilgrimage of families. (CNS/Paul Haring)

The Vatican has asked national bishops' conferences around the world to conduct a wide-ranging poll of Catholics asking for their opinions on church teachings on contraception, same-sex marriage and divorce.

Archbishop Lorenzo Baldisseri, secretary general of the Vatican's Synod of Bishops, asked the conferences to distribute the poll "immediately as widely as possible to deaneries and parishes so that input from local sources can be received."

The poll, which comes in a questionnaire sent to national bishops' conferences globally in preparation for a Vatican synod on the family next October, is the first time the church's central hierarchy has asked for such input from grass-roots Catholics since at least the establishment of the synod system following the Second Vatican Council.

The upcoming synod, which Pope Francis announced earlier this month, is to be held Oct. 5-19, 2014, on the theme "Pastoral Challenges of the family in the context of evangelization."

The questionnaire was sent Oct. 18 from Baldisseri to the presidents of the world's individual bishops' conferences.

It asks the conferences to quiz their populations on topics that sometimes have sharply divided the U.S. church, like the Catholic teaching prohibiting the use of artificial contraception, the possibility of a divorced Catholic to remarry or receive Communion, and the number of young people choosing to live together before marrying.

NCR obtained a copy of the letter and questionnaire.

That accompanying letter, dated Oct. 30, is sent from Msgr. Ronny Jenkins, the general secretary of the U.S. bishops' conference, and only asks the U.S. bishops to provide their own observations.

"In his correspondence, Archbishop Baldisseri requests the observations of the members of the Conference regarding the attached preparatory documents and questionnaire that will provide a basis for the preparation ... for the extraordinary synod," Jenkins writes.

Helen Osman, the secretary of communications for the U.S. bishops' conference, said Thursday that Jenkins was out of the office for the day and was not available to comment on how the U.S. bishops might pursue consultation for answering the questions.

In an email after initial publication of this story, Osman said the bishops will follow a "usual process" for soliciting information as "Rome asks for this kind of consultation on a regular basis."

"[The conference] pass on to bishops what is sent to us," Osman wrote. "They then take care of the local consultation and send the data back to us. We transmit it to the Holy See. That is why the letter says the bishops will send back observations (gathered locally)."

"It will be up to each bishop to determine what would be the most useful way of gathering information to provide to Rome," she wrote.

Among topics bishops' conferences are asked in the Vatican document to question their Catholic populations about:

In contrast to the Americans, the Catholic Bishops Conference of England and Wales has set up an online survey that Catholics in their countries can use to respond to the Vatican questions.

Baldisseri asks in his letter that the conferences respond to the questions by the end of January.

Baldisseri also states that Pope Francis wants the October 2014 synod to only be the first step in evaluating these questions and that he intends to address the questions again during a planned synod in 2015 marking the 50th anniversary of the synod's establishment.

The October meeting, the accompanying preparatory document states, will "define the 'status quaestionis' " while the 2015 synod will "seek working guidelines in the pastoral care of the person and the family."

"Concerns which were unheard of until a few years ago have arisen today as a result of different situations, from the widespread practice of cohabitation, which does not lead to marriage … to same-sex unions between persons," the preparatory document states.

Other issues specifically identified in the document as "requiring the Church's attention and pastoral care" include:

"A reflection on these issues by the Synod of Bishops, in addition to it being much needed and urgent, is a dutiful expression of charity towards those entrusted to the Bishops' care and the entire human family," the document states.