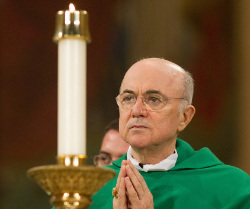 Archbishop Carlo Maria Vigano, apostolic nuncio to the United States, attends the opening Mass of the National Prayer Vigil for Life at the Basilica of the National Shrine of the Immaculate Conception in Washington on Jan. 22. (CNS photo/Nancy Phelan Wiechec)

VATICAN CITY -- Insisting on the Holy See's continuing commitment to transparency and rectitude in economic affairs, the Vatican's spokesman downplayed references to "corruption" in a letter apparently sent to Pope Benedict XVI by a Vatican official who is now apostolic nuncio to the United States.

The letters were apparently signed by Archbishop Carlo Maria Vigano and written when he was the secretary general of the commission governing Vatican City.

One of the letters, dated April 4, 2011, said that when Archbishop Vigano took office almost two years earlier, he discovered a "disastrous situation" of "chaotic management" and overspending on contracts.

The letter also complained of a "media campaign" launched by opponents of the archbishop's efforts at reform, and implored the pope not to remove him from his job, "even for promotion to a more important post."

The pope named Archbishop Vigano as nuncio to the U.S. in October 2011.

The commission manages the 108-acres of Vatican City State, including the Vatican Gardens and Museums.

During Archbishop Vigano's stint as the commission's second-highest official, a budget deficit of nearly $9.8 million in 2009 turned into a surplus of $28 million in 2010.

According to Gianluigi Nuzzi, an Italian journalist who hosted the Jan. 25 broadcast, the archbishop's reforms included cutting the cost of the Christmas nativity scene in St. Peter's Square by more than 250,000 euro ($330,000), and lowering expenses for maintaining the Vatican Gardens by some 800,000 euro ($1.05 million).

In a written statement on Jan. 26, Father Lombardi praised Archbishop Vigano's tenure at the commission as one of "administrative rigor, savings, and rectification of a generally difficult economic situation." However, he noted that other factors, including a rise in attendance at the Vatican Museums, help to explain the improved finances during the period in question.

The principles of "correct and healthy administration and of transparency" that inspired the archbishop continue today to guide the management of the commission, Father Lombardi said.

The letter to Cardinal Bertone, dated March 27, 2011, eight days before the letter to Pope Benedict, complained of the cardinal's plans to remove Archbishop Vigano from his post, accusing him of breaking a promise to let the archbishop succeed the then-president of the commission, Cardinal Giovanni Lajolo, upon the latter's retirement.

According to the letter, Cardinal Bertone had mentioned unspecified "tensions" within the commission to explain Archbishop Vigano's reassignment, but the letter's author suggested that a recent Italian newspaper article criticizing the archbishop as incompetent had contributed to the decision.

During the broadcast featuring the letters, Nuzzi was joined by Giovanni Maria Vian, editor of the Vatican newspaper, L'Osservatore Romano, who voiced skepticism at the suggestion that a post as prestigious as that of nuncio to the U.S. could be considered a demotion.

Vian also noted that, according to usual practice, number-two officials of Vatican offices are rarely promoted to the top job.

Father Lombardi would neither confirm nor deny the authenticity of the letters, which were shown on screen during the broadcast; but his statement deplored the "publication of private documents."

He also suggested that the Vatican might pursue legal action to protect the reputations of Vatican officials named in the broadcast, including investment advisers whose recommendations purportedly led the Vatican to lose 2.5 million euro ($3.3 million) in a single transaction.

The US needs an ambassador to the Holy See