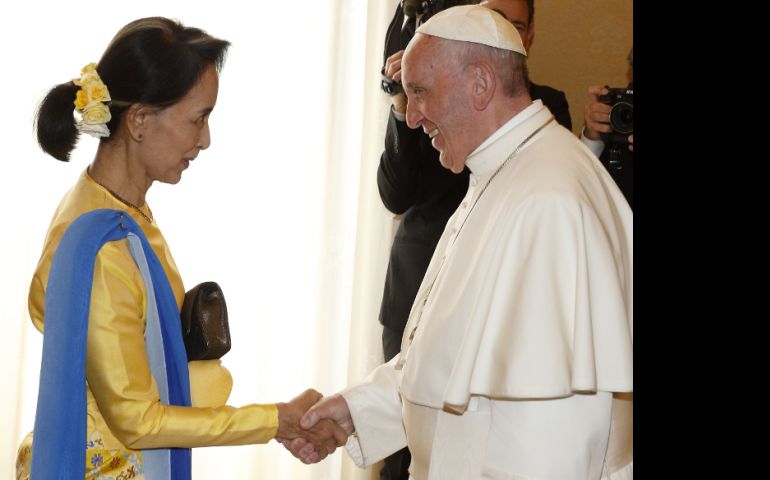 The Vatican announced the surprise move about 90 minutes after their meeting, saying in a statement that the two entities would soon be opening respective embassies. The Vatican had previously been represented in Myanmar by an apostolic delegate based in Thailand.

The move represents a significant step for Myanmar, which in 2015 began a process of democratic reforms to emerge from a half-century of military rule. Suu Kyi, who had been put on house arrest under the military leadership, was elected the country’s State Counselor, a role equivalent to prime minister, in April 2016.

The Myanmar leader and Francis spoke privately for 23 minutes during their meeting Thursday. Although Suu Kyi is not her country’s formal head of state, the pope broke normal protocol and came out to greet her as she approached his office in the apostolic palace, something he normally only does for country leaders.

The two appeared cordial and at ease with each other. Upon sitting together at Francis’ desk, they began to speak immediately, even before their translator had sat down.

Francis presented Suu Kyi with a bronze medallion that he has not been known to give other political leaders. The medallion, a 7.5 inch wide casting, shows a desert turning to bloom in a depiction of the Old Testament prophet Isaiah’s words: “The wilderness will become a fruitful field.”

“The dry, thorny branch that blossoms and bears fruit symbolizes the passage from selfishness to sharing, from war to peace,” the Vatican said in an explanation of the piece. “It is a parable of the change that takes place when men and women open their hearts to the authentic values of growth and social harmony.”

The pontiff also gave Suu Kyi a copy of his message for 2017’s World Day of Peace, which focused on nonviolence as a political method. The two leaders spoke again for several moments as Suu Kyi left Francis’ office, and the Myanmar leader finished the encounter by bowing her head towards the pontiff.

Suu Kyi met Francis as part of a round of encounters with European leaders this week. She was in Brussels Wednesday for a meeting with the European Union’s top diplomat, Federica Mogherini. She is to meet later Thursday with Italian Prime Minister Paolo Gentiloni, before traveling to London for meetings with British leaders.

The Myanmar leader faced tough questions in the Brussels meeting about her country’s treatment of Rohingya Muslims, who mainly live in its western state of Rakhine.

About 88 percent of people in Myanmar identify as Buddhist. The United Nations has warned that there are atrocities being committed against the Rohingya minority that could be considered “crimes against humanity.”

In a press conference, Mogherini urged Suu Kyi to support a U.N. mission to investigate the situation. The Myanmar leader ruled out cooperating with the investigation, saying the U.N. resolution on the matter is not “in keeping with what is actually happening on the ground.”

Jason Quinn, an expert on peace agreement design and implementation who has provided research support to negotiations in Myanmar, told NCR that while the Rohingya situation is serious he has greater concern that the country’s peace process may be faltering.

“The peace process of the last several years appears to be stalling or failing,” said Quinn, a research assistant professor at the University of Notre Dame’s Kroc Institute for International Peace Studies.

“From what I have personally experienced in the Myanmar peace process, the rebel organizations want peace and are seeking very modest political reforms and limited autonomy arrangements,” he said. “The military pretends to be committed to a peace process and engages in a lot of signaling and busy work, but they are just stalling.”

“The bottom line is that a collection of powerful military families have been enthusiastically exploiting the mineral wealth of the country-side for decades,” said Quinn. “How do you go about stopping that?”

David Steinberg, a Myanmar specialist and the author of several books on the country, said he thought the Vatican would have an opportunity in opening an embassy in the nation to speak up for the protection of the Rohingya and other minorities there.

"The building of these relationships and trust is very important," said Steinberg, a distinguished professor of Asian studies at Georgetown University. "I think it's important that the church be visible and supportive of national goals and also supportive of better relations with the Muslim community."

"I think it is important that the Vatican do something," he said. "I think Pope Francis because of his record on human rights could maybe help try and influence Aung San Suu Kyi to do more."

Francis has given special emphasis to the church in Myanmar, appointing Yangon Archbishop Charles Bo as the country’s first cardinal in 2015. According to the Vatican’s 2015 figures, the latest available, there are 659,000 Catholics in the country of 51 million and 384 parishes.

Pope to bishops: Listen to abuse victims for sake of church

Pope Francis and his predecessors