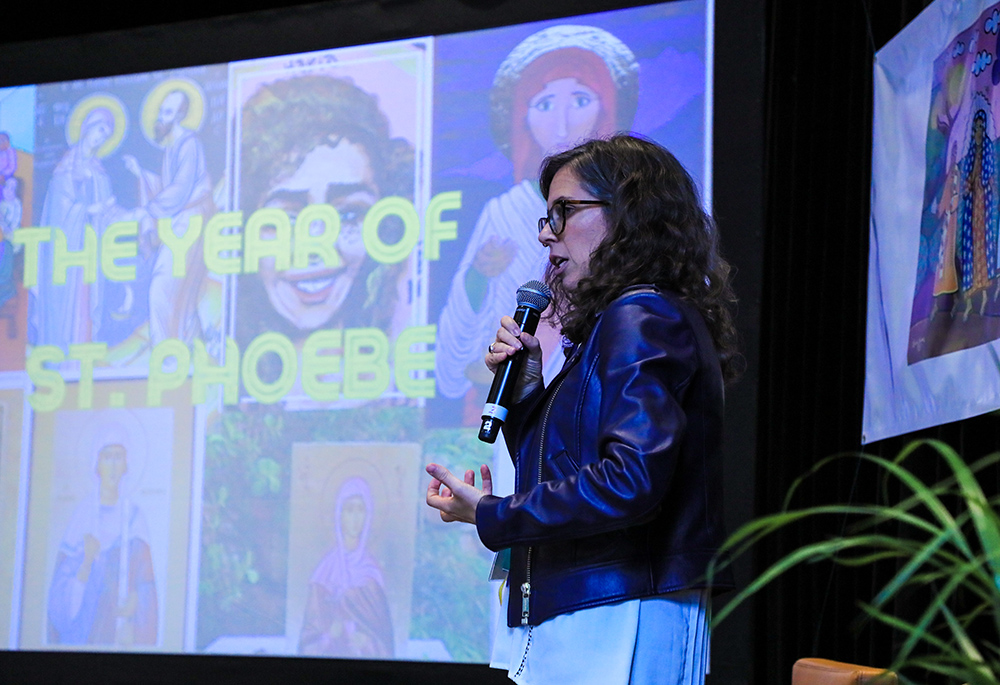 Casey Stanton, co-director of Discerning Deacons, shares the vision for how to walk together as part of the Year of St. Phoebe, advancing a synodal church and lifting up the contributions of women. (Luisa Arumi Ortiz)

When Casey Stanton, who has spent the last year leading synod listening sessions throughout the United States, traveled to Mexico last month, she repeatedly heard the phrase "poco a poco" — or "little by little" — used to describe how change takes place in the Catholic Church.

For Stanton, who is co-director of Discerning Deacons, a project dedicated to engaging Catholics in conversations about the role of women and the diaconate, the phrase was not a lament, but rather words of encouragement and affirmation that change and renewal is possible.

Stanton had traveled to Mexico first for a pilgrimage to the Basilica of Our Lady of Guadalupe, but then on to the southern state of Chiapas. There, in the Diocese of San Cristóbal de Las Casas, she spent time understanding how people in the majority-Indigenous diocese had become fierce defenders of its native cultures and land, and along the way elevated the role of women in the church, including through diaconal teams, where couples of men and women were tasked with assuming diaconal responsibilities.

"It's the lived social gospel. It's the living out of accompaniment," she said of the experience, which she described as a laboratory for the Catholic Church living out the promises of Vatican II. "It showed the church as helping to preserve a culture rather than wipe it out."

Stanton spoke to NCR on Oct. 4 while in Rome, where she has been meeting with a number of Vatican officials engaged in the synod process and to present the group's findings after holding hundreds of listening sessions. Her visit comes at the midway point of Pope Francis' newly revamped synod process, which was launched last October with listening sessions around the globe and then comes to fulfillment with a Rome meeting in October 2023. 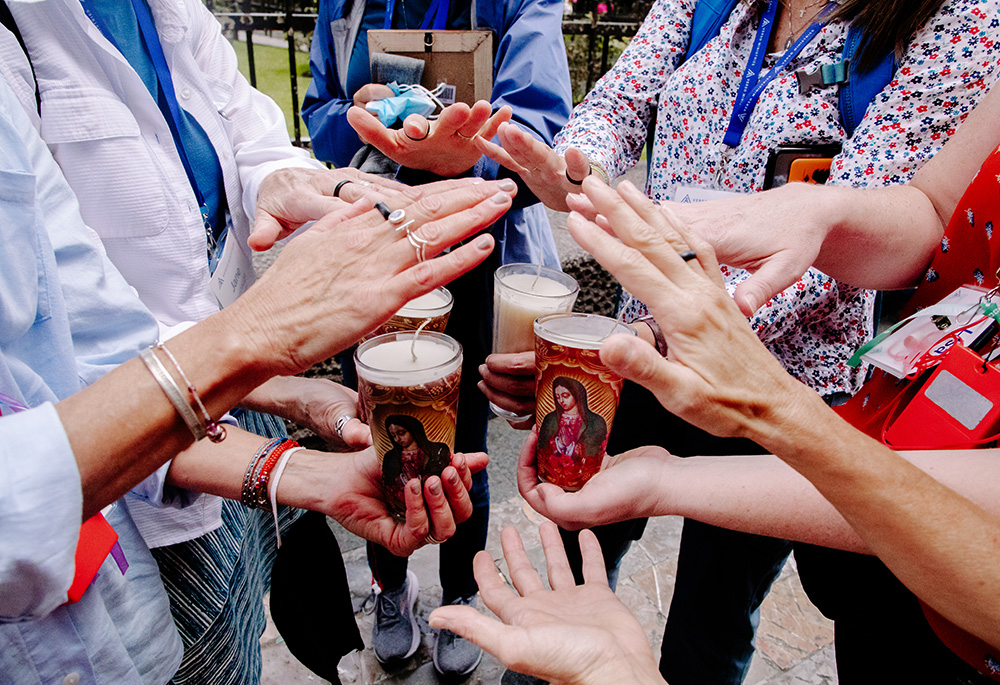 Pilgrims offer prayers and bless candles they bought at the Shrine of Our Lady of Guadalupe in Mexico City, as they prepare to climb the hill at Tepeyac. Discerning Deacons held a pilgrimage to Mexico City Aug. 31-Sept. 3. (Luisa Arumi Ortiz)

For the team at Discerning Deacons, the synodal process is not a "one-and-done" experience. It is an invitation to share what Stanton describes as "good news": that the Catholic Church is eager to offer a listening ear to the desires and concerns of all of its members, not just the clergy.

That's why during the last year, according to the group's newly released synod synthesis report, Discerning Deacons' team of "synod animators" led a total of 358 synod consultations (including 188 in person, 122 virtual) that engaged some 8,819 people in over 50 dioceses around the world.

While the motivating question for the group is the role of women and the possibility of restoring women to the diaconate, Stanton says that "part of this process is to reveal where we are as a church and to foster a culture of listening" on a range of issues.

The question of the diaconate is one that has loomed large ever since Francis launched a commission in 2016 to study the historical questions surrounding women deacons, which the pope said did not reach a consensus on the early status of deacons. He then formed a second one, which is ongoing, following the 2019 Amazon synod, where the topic had been a dominant theme.

Related: She was an early church deacon. Catholic women now want to reclaim her example.

Francis has repeatedly said that the synod process cannot be viewed as a parliamentary or political process. Stanton says what she and her colleagues have tried to do over the last year is help facilitate a proper discernment.

"You can't discern what you can't talk about," she said. "We've tried to make it safe to have a conversation that we don't know the conclusion of."

After Pope John Paul II's 1994 apostolic constitution Ordinatio Sacerdotalis, which said "the Church has no authority whatsoever to confer priestly ordination on women," Stanton said that so much of the discussion of the role of women and any form of ordination has been considered taboo and created a culture of fear.

The synod process, she observed, has helped provide the freedom and the space for greater conversation. That includes both those in support of restoring women to the diaconate and those opposed or skeptical.

"If there is Holy Spirit-inspired hesitation, that needs to be heard," she said. "But we have to have a conversation."

What is different about synodality, she added, is that "the people in power" have "invited the conversation."

Reflecting back on embracing the "poco a poco" theory of change, Stanton recalls that it was the Second Vatican Council that restored the permanent diaconate, in which married men may be ordained as deacons for lifelong service in the church.

"The roots of the current diaconate are not in antiquity, they are in modernity," she says. "We're here asking God to help us figure out how we're supposed to be on the earth, and I think we're supposed to keep asking that question in every generation." 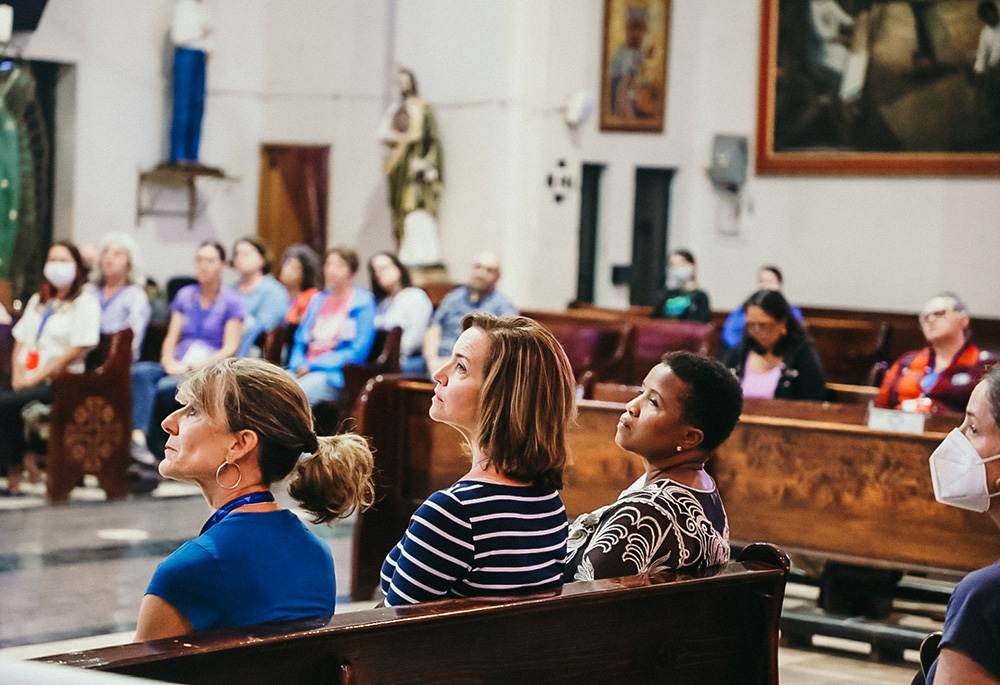 Patricia Santos of St. Paul, Minnesota, Carmen Villafañe of Miami, and Philomene Peán from Boston listen to preaching during the closing liturgy at the Church of the Fifth Apparition, Santa Maria Tulpetlac, during Discerning Deacons' pilgrimage to Mexico. (Luisa Arumi Ortiz)

As the global synod process moves to its second stage, with ecclesial gatherings on every continent, synod advisers have been clear that discussion about the role of women in the church was a recurring theme from the first diocesan listening stage of the synod.

Stanton hopes that in the next stage, some concrete proposals begin to emerge. She also says that she recognizes that there may be areas of the globe that do not see the female diaconate as necessary or needed at this stage, but she hopes "we can recognize in other parts of the world this would help them further the mission of sharing good news and ministering to the people of God."

"We can actually come to consensus without uniformity," she said. "It doesn't have to be uniform."

At the same time, she says it is important to manage expectations.

“Our mission is to be the deacons called for today that the bishop of Rome needs," said Stanton, "and we're reporting for duty."

This story appears in the Synod on Synodality feature series. View the full series.
A version of this story appeared in the Oct 28-Nov 10, 2022 print issue under the headline: Women deacons movement hopes for concrete proposals.