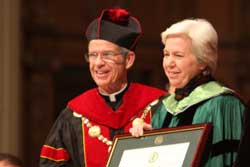 The University of San Francisco honored Catholic women religious for their contributions to the country and the church by awarding them with an honorary doctorate at commencement ceremonies Dec. 17.

Dominican sister and president of the Leadership Conference of Catholic Women Religious (LCWR), Mary Hughes, accepted the degree on behalf of all religious sisters in America.

Founded at the request of the Vatican’s Congregation for Religious in 1956, LCWR represents 59,000 religious sisters across the country.

“We honor Catholic women religious to recognize their uncompromising commitment to serve those underrepresented and underprivileged with love and concern,” said Jesuit Father and USF President Stephen A. Privett.

“The sisters are extraordinary persons of faith devoted to building a better world through prayer and hard work. They offer an inspiring example of service in the modern world for our students and graduates.”??

The honor comes at a time the Vatican is investigating both U.S. women and their largest leadership organization, LCWR. Rome is currently conducting two studies of the women and these are seen as visible signs of a collective disenchantment by members of the Vatican with the lifestyles and moral positions taken by the women in recent years.

Two years ago the Vatican announced the most formal of Vatican inquiries – an Apostolic Visitation, a three-year long study into the lifestyles of the women. About the same time it also began a doctrinal inquiry into LCWR. The Apostolic Investigation is expected to continue for another year with visitation teams currently completing a second round of site visits to women religious communities.

With these investigations going on, the USF honorary doctorate appears to be yet another visible contrary endorsement of the work of the women and one more signal to the Vatican that U.S. Catholics are not at all pleased with the Vatican moves.

The investigations have revealed a rift between Rome and a large section of U.S. Catholics. When the Vatican Congregation for the Doctrine of Faith first told LCWR it was beginning an doctrinal inquiry, a letter to LCWR said the congregation was especially concerned that LCWR had not adequately held the official church line on abortion, women’s ordination and the primacy of the Catholic faith as the means of universal salvation.

Cardinal Franc Rode, whose congregation heads the Apostolic Visitation is expected to retire in the coming weeks. Many women religious hope his successor will by more sympathetic to their work and could have a greater understanding for the way U.S. Catholics view their women religious.

Meanwhile, scores of U.S. and international religious and lay groups have issued statements in support for the U.S. women religious during the past eighteen months. However, the USF is the first university to honor the women with an honorary degree.

The USF honor noted that it was women religious who established the nation’s largest private school system, educating millions of young Americans and that these schools welcomed immigrants and classes were often taught in a second language as well as English.

Catholic sisters are responsible for advancing women’s higher education by establishing more than 100 women’s colleges by the middle of the last century, the citation read.

Along with building and staffing hospitals, the influence of women religious in the U.S. health care system is incalculable, USF officials noted. The achievements of Catholic women religious include inventing the first infant incubator for premature babies, partnering to form the basis for the Mayo Clinic, advocating for alcoholism to be treated as a medical condition, and responding to a plea from government officials to set up a hospital system for patients suffering from Hansen’s disease (leprosy).

In 2005, approximately one in six hospital patients in the United States was treated in a Catholic facility founded by Catholic sisters.?

The graduation ceremony took place in St. Ignatius Catholic Church on the USF campus. USF is San Francisco’s oldest university and is ranked as one of the most ethnically diverse universities in the country. The Jesuit run university educates some 9,600 students, enrolled both on- and off-campus.