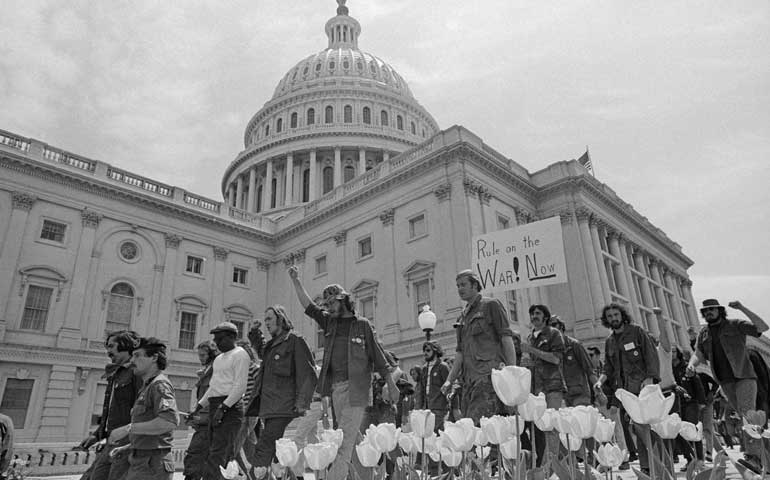 Members of Vietnam Veterans Against the War march around the Capitol in Washington, D.C., in 1971. (AP Imags/©Corbis/Bettmann)

Wars may end when the final shot is fired or the last bomb dropped, but the effects of the violence remain. So it is with the Vietnam War -- or, as it is called in that distant land, the American War. U.S. involvement escalated in 1964 and over the next 10 years took the lives of an estimated 2.3 million Vietnamese and 59,000 Americans.

To commemorate its 50th anniversary, officials at the Department of Defense have been at work since 2012 giving their version of what began as an anticommunist intervention and ended in a blood-soaked tragedy and American defeat.

As authorized by Congress in 2008, the grandly titled "Vietnam War 50th Anniversary Commemoration" is being directed by retired Army Lt. Gen. Claude "Mick" Kicklighter. He is thinking big. It won't be a one-day event with marching bands, speeches, gun salutes and the hoisting of flags. Instead, explains the general in a 2012 interview on the website HistoryNet.com, the remembrance "will have three phases, much like the war itself, with a gradual buildup, peak period and gradual ramping down."

Memorial Day 2015 will be the opener to the "most active phase" of the commemoration, which will run to Veterans Day 2017 and finally conclude on Veterans Day 2025. Kicklighter says that he and his platoon of commemorators are "very busy planning all our efforts: educational materials, a Pentagon exhibit, traveling exhibits, symposiums, oral history projects and much more."

Little should be expected from all this busyness except what military leaders specialize in: self-serving spinning. As a hint of what's to come, Kicklighter revealed that he has a selective memory: Vietnam "was a helicopter war." Really? It wasn't Army pilots of Huey or Chinook choppers during the 12 days of the 1972 Christmas air assault of North Vietnam when thousands of tons of bombs were dropped by hundreds of B-52s and smaller planes. It wasn't helicopter pilots who bombed Hanoi's Bach Mai Hospital, the city's largest. It was rampaging ground soldiers, not helicopter pilots, who burned villages, planted land mines and massacred hundreds of civilians at My Lai on March 16, 1968.

As the commemorator-in-chief, Kicklighter states that his goal is to "help the nation take advantage of a rare opportunity to turn back to a page in history and to right a wrong, by expressing its honor and respect to Vietnam veterans and their families." But which wrong does he have in mind? Kicklighter doesn't say.

Is it the wrong that will never be righted by a glossy Pentagon exhibit? The wrong that veterans suffered when they returned home with high rates of depression, alcoholism, heroin addiction and suicide? In 1969, Max Cleland, a triple amputee, pleaded with a Senate committee for programs to treat veterans overwhelmed by emotional problems. A decade later, when I came to know this good man when he was head of the Veterans Administration, he went before the same committee with the same unanswered plea.

Bobby Muller, whose combat wounds put him in a wheelchair and who became a leader of Vietnam Veterans Against the War, regularly sought help from congressional committees and Johnson and Nixon hawks whose anticommunist policies started the war and kept it going. I was an ally of Muller. In 1981, he told me: "A lot of these people don't even have the politeness to respond. They've forgotten us so quickly."

W.D. Ehrhart, who as an 18-year-old Marine began 13 months of ground fighting in 1966, had the Johnson-Nixon war-makers in mind in a July 4, 1989, essay in The Philadelphia Inquirer:

Not once -- in all these years -- have I ever heard a single high-level policymaker of the Vietnam war apologize for what he did, ever admit he made a mistake, ever show the slightest sign of remorse for all the havoc and misery, the shattered lives and shattered families and shattered nations left gasping in the wake of his decisions. ... They asked my friends and me to get down and dirty in the rice fields only to abandon us under fire. We did the killing and the dying, and then they left us to find our own way back while they went on with their honorable lives as if nothing at all were out of order.

Little of the damage done to veterans -- a high proportion of them minorities or from low-income families who couldn't dodge the draft as did the privileged and connected -- George W. Bush, Dick Cheney, Dan Quayle and Pat Buchanan -- can be corrected by commemorations and vague calls for "honor and respect." If the words of veterans like Cleland, Muller and Ehrhart mean much, let the 50th anniversary of the war be a day of apologies -- ones long overlooked and long overdue.

A version of this story appeared in the Jan 16-29, 2015 print issue under the headline: Apologies due during war's anniversary.