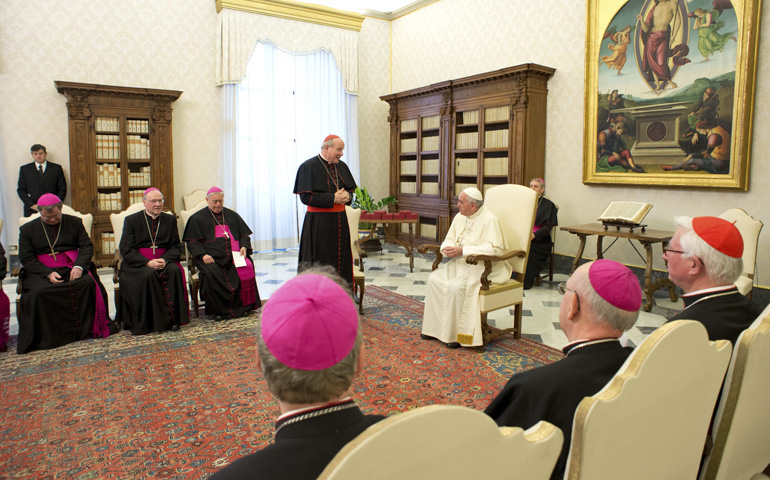 "It is fascinating to see how Pope Francis is encouraging, reviving and renewing the church. Our meeting with him was an excellent lesson on how to live the Gospel today," Cardinal Christoph Schönborn of Vienna said after a 90-minute audience with the pope during the Austrian bishops' "ad limina" visit to the Vatican in the last week of January.

The Austrian bishops took the results of the recent Vatican questionnaire to Rome with them. Responses showed that 95 percent of those who had filled out the questionnaire in Austria were in favor of allowing divorced and remarried Catholics to receive the sacraments.

The subject of family relationships today and how the church should deal with them played an important role at the Jan. 30 meeting with the pope, Schönborn said. "We cannot speak about people without speaking about families," Francis said, explaining that was why the subject of the coming Synod of Bishops in October had been altered from bioethics to the family.

Francis spoke of his experiences in Latin America, where the situation of marriage and the family was, to a certain extent, "far more dramatic" than in Europe, Schönborn said. It is important to realize that today many couples live together without getting married and have children, then later marry in a registry office, with some opting for a church marriage, the pope explained. The church must take this way of life seriously and accompany the couples on their way, Francis underlined. His basic message was "Don't judge, but look closely and listen very carefully," Schönborn said.

In several interviews shortly before leaving Vienna, Schönborn advocated a more rational, down-to-earth approach toward family relationships. "For the most part, the church approaches the [family] issue unhistorically," he said. "People have always lived together in various ways. And today, we in the church tacitly live with the fact that the majority of our young people, including those with close ties to the Catholic church, quite naturally live together. The simple fact is that the environment has changed."

Schönborn "in no way" wanted to advocate changing canon law but merely to show how difficult it was to bring the ideal family model into line with reality. "The decisive point is not to condemn the way most people actually live together, but to ask, 'How do we cope with failure?' " he said.

While most people's "wishes, hopes and longings often largely correspond to what the Bible and the church say about marriage and the family" and they longed for a successful relationship and a successful family life, real life told a different story, the cardinal said. "The great challenge is to span a bridge between what we long for and what we succeed in achieving." It was a case of bringing truth and mercy together, he said.

Schönborn said he regretted that the Austrian bishops haven't dared to speak out openly on necessary church reforms in the past. They haven't had the courage to address the need for greater decentralization and to strengthen local churches' responsibilities, he said. "We were far too hesitant. I beat my own breast here. We certainly lacked the courage to speak out openly."

The Austrian bishops also discussed with the pope the Austrian Priests' Initiative, which has called for the ordination of married men and women, and their "Call to Disobedience," Schönborn said. The pope advised them that the most important thing for bishops is always to be in close contact with their priests, the cardinal said.

Schönborn said he was convinced that far-reaching church reform was on the way, "but it will not be achieved through big words and programs but through people like Pope Francis." One could already see that the pope has become a role model, Schönborn said. "The atmosphere is changing and his behavior is making itself felt," he said. What impressed him most about the pope was his charisma. "You can feel his inner devotion to God from which his compassion, his warmth and his infectious sense of humor emanates," the cardinal said.

A version of this story appeared in the Feb 14-27, 2014 print issue under the headline: Cardinal: Pope has already changed church.