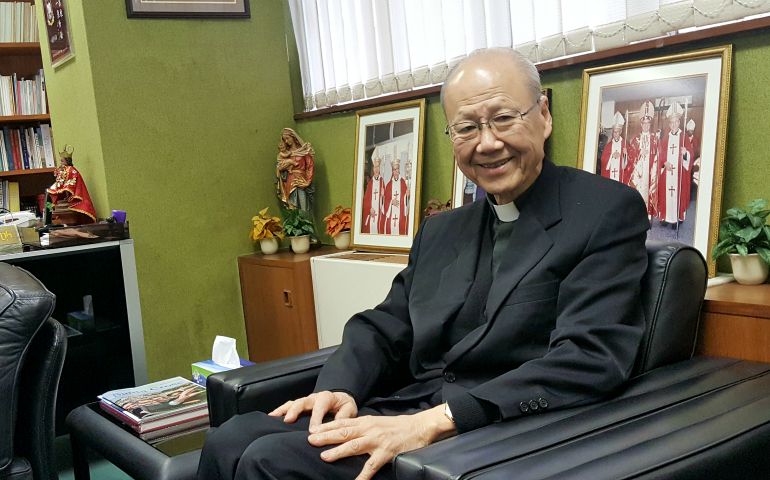 Hong Kong — There is progress being made in resolving a key issue between the Holy See and China regarding the authority to appoint bishops, though Cardinal John Tong of Hong Kong said it will be a "gradual" process and other challenges remain.

Elaborating on an extensive article published Feb. 9 in the English language Sunday Examiner, Tong in an NCR interview in his office in Hong Kong said he was focusing "only about the dialogue [between the Holy See and China] and things that are important elements to the dialogue and that an important element has been achieved — at least almost — about the appointment [of bishops] by the Holy Father."

Tong declined to give any timetable for an agreement. In the article, he noted that over the past year, a working group has been set up through which both sides have tried to resolve several issues, and that a preliminary agreement had "reportedly been reached and that will lead to the appointment of bishops."

Vital to the agreement, Tong said in the NCR interview, is the authority of the pope to have final approval on bishops. "That is necessary — otherwise we cannot accept whoever is presented," Tong said.

China has maintained it can appoint bishops, contrary to Catholic doctrine, in which that authority rests with the pope. What has evolved in China is a complicated structure in which about 70 government-appointed bishops operate in the registered, sometimes called the "open" church, run through the Chinese Catholic Patriotic Association established in 1957 under government authority. The majority of those bishops have been tacitly recognized by the Vatican. Seven bishops are not recognized by Rome and are excommunicated.

Close to 40 bishops have been appointed by the Holy See but not recognized by the Chinese government. These bishops operate the unofficial church, often called the "underground" church, and are often restricted in their activities and sometimes persecuted.

Cardinal Joseph Zen, former bishop of Hong Kong and Tong's predecessor, has been critical of efforts by the Vatican to reach an agreement with Beijing, warning it would betray the underground church and that Pope Francis is being "naive" to pursue relations with China.

Other critics of Tong's essay have voiced their disagreement or said his message was largely ignored by Chinese Catholics who believe little will really change, given the repressive nature of the Chinese government.

Tong said in the interview that some critics may not have read his essay carefully or they went beyond the scope of his writing. "Besides telling the people my optimistic viewpoint, I also asked the people to pray for the progress of the dialogue between the Holy See and China," he said.

His essay focused on the process of dialogue and the central issue of the appointment of bishops, not on re-establishing diplomatic relations with China. The Vatican and China ceased diplomatic relations after the communist government victory in 1949 threw out foreign missionaries and later established the Chinese Catholic Patriotic Association.

"I'm not a politician — as a priest, as a church people, we care about the church method, which is more important — about the appointment [of bishops] and about the unity between the church in China and the universal church."

Regarding the pope's appointment of bishops, "that's very important," he said. "I would like to move a step forward but still there are many, many issues. That is one reason why even if this problem could be solved, there are more issues to be solved."

Establishing diplomatic relations "would be good but that's not the most important. That's not the first step — it may be the last step."

As for Zen's comments, "we just talked to each other. He said, 'We are brothers.' He plays his own role, I play my own role," Tong said. "He just says he wants to help the people [negotiating the agreement] to be careful — of course, we should always be careful."

Whether there will be a formal announcement of an agreement is up to the Holy See, he said, "provided we have some concrete results."

Tong said he doesn't think China is growing more repressive about religious activities and freedoms. As one example, he said about 20 to 30 priests and women religious come to the Holy Spirit Center in Hong Kong every other month for weeklong seminars on topics such as running a parish, starting youth activities, and helping couples with marriage preparation. "Comparing with the past, I think there isn't [more repression]," he said. "In some places, maybe, but not the whole country."

When China first began opening up in the 1980s, there was a lot of fear among Catholics and religious. When he asked questions, few dared to answer. Now, he said, there is much more openness of expression.

"China cannot go back to the old ways because ordinary people can come out [of China]," he said. "They've already seen situation outside so they have a better appetite regarding the freedom which they enjoy outside. The common people have a big appetite for freedom, so the government is not stupid — they know common people want some more so they will loosen their control a little bit from time to time. They still want to control the people but they have to compromise. In the long run, you can see China is wider open if you look back from 1980 until now."

In the interview, Tong drew on stories from his book Challenges and Hope: Stories From the Catholic Church in China and on a favorite three-word structure that he often uses to describe the Catholic church in China: wonderful, difficult and possible.

It is wonderful because "beforehand the door was closed and you could not see anything — after the opening, there are many, many good things," he said, including lessons about perseverance. In the 30 years from the beginnings of the communist regime until the opening in the 1980s, many Catholics "suffered a lot but they kept their faith."

It is difficult because of continued restrictions by the Chinese government, and "even while it is more open than compared with the past, yet still they are not the same" as more open, free societies.

He cited the example of one "underground" bishop not recognized by the government and not able to practice in an open church. Praying about what he could do, the bishop saw that under China's former one-child policy, many families preferring boy babies would abandon girl babies. He opened a house to care for the babies and mobilized Catholic laity and some women religious to help. The effort grew to more than 100 babies and drew praise from a government agency for its work.

"So that's the 'possible,' " Tong said. "You don't have to make confrontations — there are some other chances. If you try to search for chances, you can still do some good pastoral work to help the people and also even for evangelization."

With China, Vatican diplomats must make the best of a bad situation