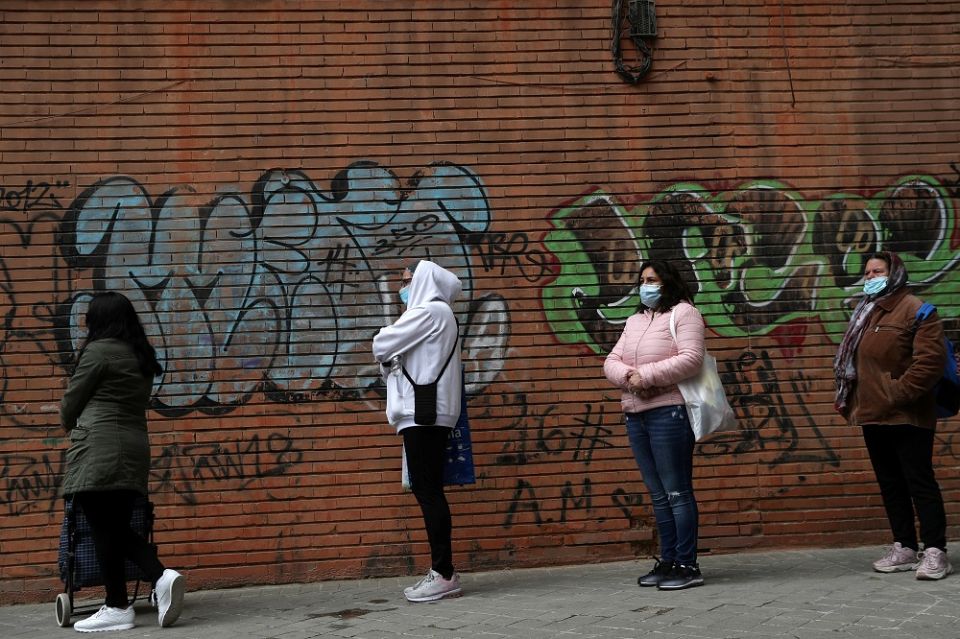 Warsaw, Poland — As Europeans struggle to resume daily life after the loosening of coronavirus lockdowns, Catholic organizations are urging governments to learn lessons from the crisis and introduce far-reaching reforms.

"It's an illusion to think we can just go back to normal after this — it's that 'normal' which led us to the pandemic," said Chiara Martinelli, senior adviser to the Brussels-based International Cooperation for Development and Solidarity (CIDSE), a grouping of 17 Catholic development agencies.

"We need policies for going forward, not backwards, and the voice of Catholics, collaborating with other faiths, needs to be heard," she said. "While we need to place values at the heart of policy-making, we also need to advocate practical solutions."

Martinelli, an Italian, spoke just after Europe's Catholic bishops met June 3 to outline the church's contribution to a "just recovery that leaves no one behind."

She told NCR the time had come to be provocative in proposing a "new strategy" for Europe and forward-looking measures to resolve long-standing problems.

"This pandemic arrived amid a growing understanding in Europe about the need for a more holistic approach," Martinelli said.

"The EU is at a dangerous moment, lacking credibility and support from its citizens, and if its institutions wish to build a plan across multiple sectors, they must involve the different stakeholders — civil society, trade unions, faith groups and others, who'll all be crucial for a new Europe," she said.

CIDSE has been one of several Catholic groups backing calls for a universal minimum wage in Europe, which was advocated in the EU's 2017 Pillar of Social Rights, but has not been introduced in all countries.

But other reforms are being urged as well, in recognition of both the systemic failures highlighted by the crisis and the key role played in sustaining healthcare, transport and food production during lockdowns by people at the lowest economic levels, who often live without regulated earnings, sick pay, holiday entitlements or pension rights.

When COVID-19 reached Europe earlier this year, the EU practically ceased to function, as its 27 member-states sealed their frontiers and adopted unilateral policies. There are hopes that a revived EU can now act as a vehicle for necessary changes.

Presenting a 2,000-page recovery plan on May 27, under which 750 billion euros will be raised from capital markets for needy countries, the EU Commission's German president, Ursula Von Der Leyen, predicted the "ambitious plan" would "kick-start" the European economy by allocating funds "where resilience needs are the greatest."

However, some countries, including the Netherlands, Austria, Denmark and Sweden have insisted the funds should be disbursed as loans only, an option that experts say will necessitate drastic new austerity measures in the EU's poorest countries.

This has prompted fresh warnings from COMECE, the Brussels-based commission representing the EU's Catholic bishops, which urged EU leaders May 27 to restore public confidence in the continental union.

COMECE, headed by Luxembourg Cardinal Jean-Claude Hollerich, said the pandemic had highlighted the importance of "sound public infrastructures and services," including curbs on corruption, fairer taxation and "ecological, social and contributive justice."

This had to mean "a clear perspective for a Europe aiming to grow united," and swift agreement on increased help for the poor and homeless, it said.

"The COVID-19 pandemic and its consequences have hit the EU unexpectedly and brutally — exposing our vulnerability to public health crises, as well as the EU's fragility and weakness in times of crisis," said the commission. 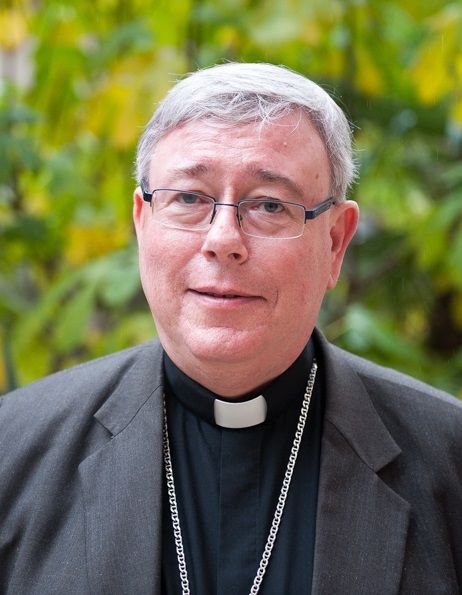 Martinelli said she and other Catholic experts will be stressing the inter-connectedness of current problems, and the need for "policy coherence" in tackling them.

Other Catholic organizations have urged the EU to maintain its commitments on international aid and debt relief, as well arguing for focused efforts at home.

After the continent-wide death-toll in care homes, the Rome-based Sant’Egidio Community has warned against a "selective health system" that prioritizes the young and fit, while Europe's 20 Jesuit provinces have demanded the redirection of military budgets towards healthcare, social services and support for asylum-seekers.

Meanwhile, Caritas-Europa has echoed EU Commission forecasts of a deep economic recession, and called on the trading bloc to emphasize hardship reduction in its new Multiannual Financial Framework for the 2020s.

In May, Caritas joined other Christian aid groups, including the mostly Protestant Eurodiaconia, in a new EU Alliance for Investing in Children, calling for "ambitious measures" to help the 110 million people, a quarter of them children, who already faced poverty before the pandemic.

Peter Verhaeghe, Caritas-Europa's policy and advocacy officer, says continuing coronavirus lockdowns have already become "unbearable" for many Europeans, especially for those employed informally on zero-hours contracts, who've lost not only their jobs, but also any form of social protection.

"We must work for the ideal of having no worker without rights, and ensure everyone is entitled to basic provisions when they need them — in a solidarity system which reflects Catholic social teaching," Verhaeghe, whose network is one of seven regions of the Vatican-based Caritas Internationalis, told NCR.

"This crisis has affected a large group of people, workers and self-employed, who thought they'd never have problems but now find themselves counting on the wider society," said Verhaeghe. "As it drags on, I see initiatives emerging to ensure things are done differently in future." 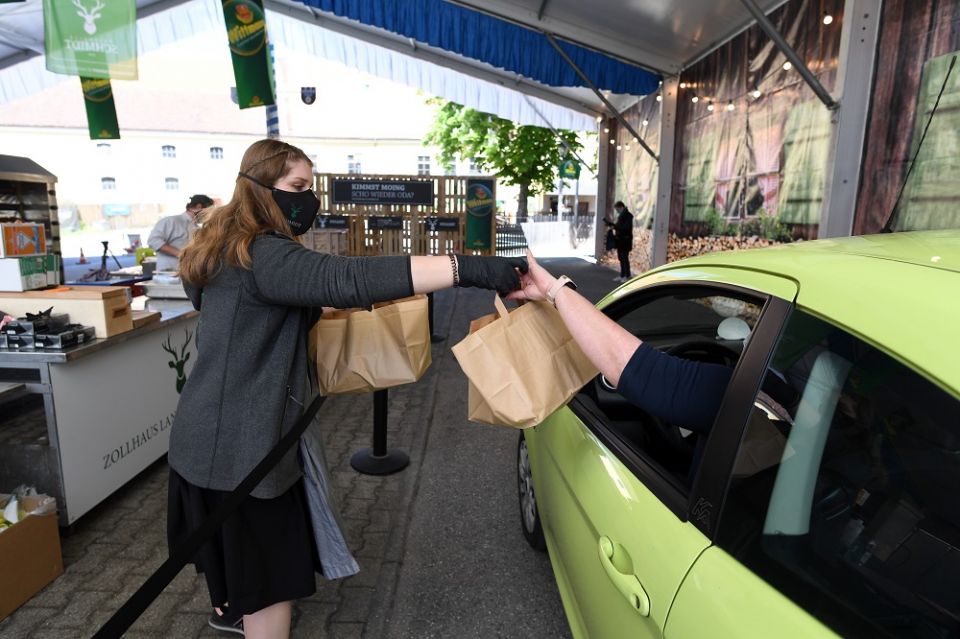 An employee serves food to a customer in early May at a drive-in market in Landshut, Germany, during the COVID-19 pandemic. (CNS/Andreas Gebert, Reuters)

Figures like these have followed the lead of Pope Francis, who described COVID-19 in a Pentecost letter to priests as an "invisible, silent, expansive and viral presence," which had already disrupted and upset "apparently overpowering global agendas," and urged Christians to "proclaim and prophesy the future" with a "realistic and creative imagination."

With all European countries forecast to see drastic falls in gross domestic product (GDP) during 2020, from 6.6 percent in Germany to more than 11 percent in Britain, France, Italy and Spain, such calls look set to grow.

There are predictions of serious unrest by late summer, as the pandemic's effects are felt in failed businesses, welfare cuts and emergency budgets, in an atmosphere of militancy already stoked by continent-wide "Black Lives Matter" protests.

In an early June statement, Europe's Catholic bishops reiterated the church's closeness to COVID-19's many victims and the front-line workers struggling against it, as well as their concern about the pandemic's devastating economic consequences.

They added that the crisis had highlighted "the great limits of individualism," and urged Europe's leaders to the invest in the family — "the true cell of solidarity and sharing."

Martinelli said Catholic voices like these will be important in bringing ideas and insights to the European policy-making table and ensuring "systemic solidarity" remains at the forefront.

"This could be the last chance for Europe — a final window of opportunity to show leadership and demonstrate we can really build a better future," she told NCR.

"The pandemic has shown how the young are ready to help older people when they're in danger — we now need to see what older leaders can do for the next European generation," said Martinelli. "This requires not just emergency measures, but long-term thinking and resources for a much wider recovery."