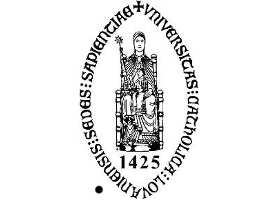 The Catholic University of Leuven was founded in 1425

An official statement, released today (Dec. 22) by University Rector (President) Mark Waer and Jef Roos, Acting Chair of the Board of Trustees, stresses the university's Catholic tradition, its identity, its value system, and its role as a critical center of thought in and for the Catholic community.

Over the past months, there has been great speculation -- and a number of false press reports -- about the official name for the University. Some suspected that the word “Catholic” would be dropped from its official name.

The university’s updated mission statement, also released today, affirms: "From its Christian perspective, the university endeavors to be a place of open discussion of social, philosophical and ethical issues and a critical center of thought in and for the Catholic community."

The complete mission statement can be found here: http://www.kuleuven.be/about/mission_statement.html)

?The mission statement also emphasizes the university’s managerial autonomy as an essential condition for academic freedom. Since the 1960s especially, the Catholic University of Leuven, founded in 1425 has stressed its Catholic identity while at the same time stressing its institutional autonomy. The Catholic Church has always respected this.

According to Rector Mark Waer, in the coming months, the university, known in Belgium as the KU Leuven, or Katholieke Universiteit Leuven, will strive to make its identity more explicit, both in its structure and in its pedagogical project.

?The university will expand its course offerings on religion, philosophy, and ethics to include insights from diverse human perspectives and worldviews as well as from the natural and social sciences, cultural studies, and the arts.

?Along with focusing on its philosophical profile, the university’s new mission statement also emphasizes the Catholic University of Leuven’s international orientation, the intensity and interdisciplinary of its research, the quality of its education, and the importance it attributes to serving society in diverse domains.

?In terms of its institutional structure, the KU Leuven's Board of Trustees and its partner university-level colleges, in what is known as the KU Leuven Association, will be reorganized into a new governance union in early 2012. The reorganization will focus on a better integration of the academic programs of the various colleges into the university.

In their joint statement, the University Rector and the Chair of the Board of Trustees have emphasized that, while affirming its autonomy, the University wishes to maintain a close association with the Catholic community.

[John A Dick, a Belgian-based American historical theologian, is retired from the Catholic University of Leuven and is currently President of the American College of Louvain Alumni Association.]