Catholics among initial responders to those injured in Tianjin blast 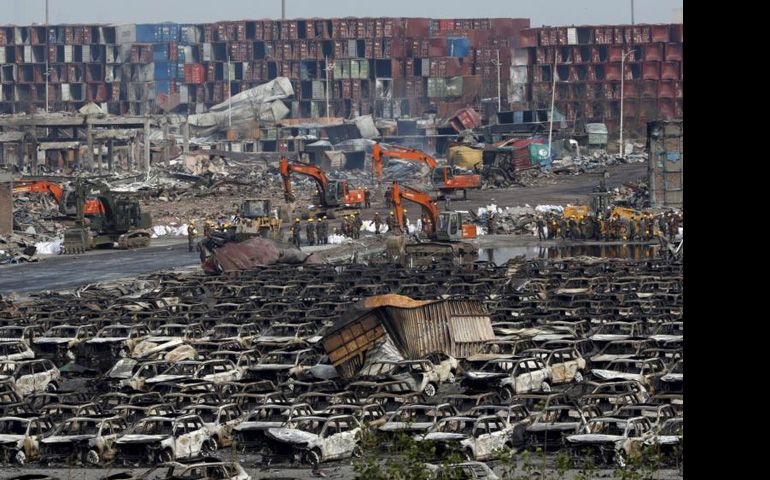 The morning after the industrial blast in Tianjin, China, the Tianjin Diocesan Social Service Center helped line up 60 volunteers to assist the government's rescue and relief work. The volunteers donated drinking water, clothes and other supplies to hospitals and temporary settlements for evacuees, reported ucanews.com.

At least 114 people were killed and hundreds more injured after a series of explosions rocked Tianjin, a port city about 35 miles east of Beijing, Aug. 12.

Volunteers were briefed on chemical contamination before heading to the disaster area, where officials divided them into groups and dispatched them to various relief camps and hospitals.

Ignatius Song was stationed about 500 yards from the blast site.

Song described a chaotic scene with emergency vehicles and ambulances delivering the injured to hospitals while bringing in much-needed supplies.

"Broken glass was everywhere on the road that led to the blast scene. There were collapsed buildings. It was like watching a disaster movie," said Song, who helped evacuate residents.

"There was a long queue outside the mobile blood donation center. Many private cars and taxis offered free transportation. A number of hotels provided free accommodation and meals. There were nearly 100 volunteer groups formed by NGOs or individuals," he told ucanews.com.

Another church volunteer, Joseph Hua, said, “When our team entered the hospital, it suddenly came to mind that we were facing was a real disaster.”

After the explosion, Tianjin Catholics took to social media to plead with others not to visit the scene out of curiosity.

Coadjutor Bishop Melchior Shi Hongzhen, a Vatican-approved bishop whom the government recognizes only as a priest, lives about six miles from where the blast happened. A priest who works with Bishop Shi told ucanews.com that in the hours following the blast, they celebrated Mass and prayed for "the dead, the injured and their families."

“This is the only thing that we can do,” the priest said.

In downtown Tianjin, Father Zhang Liang of St Joseph's Cathedral appealed for donations and choir members gathered to give blood.

“Tianjin is not short of money. What is needed now is relief supplies. But since roads that lead to Tanggu are blocked, we have to ask friends and relatives who live in that area to buy and dispatch the relief supplies for us,” said Ma Bao, a lay worker at the cathedral.

World | Catholics among initial responders to those injured in Tianjin blast

From Bay Area, volunteers head to El Paso: 'Time for Catholics to be Catholic'