Catholics called to do everything in their power to end trafficking 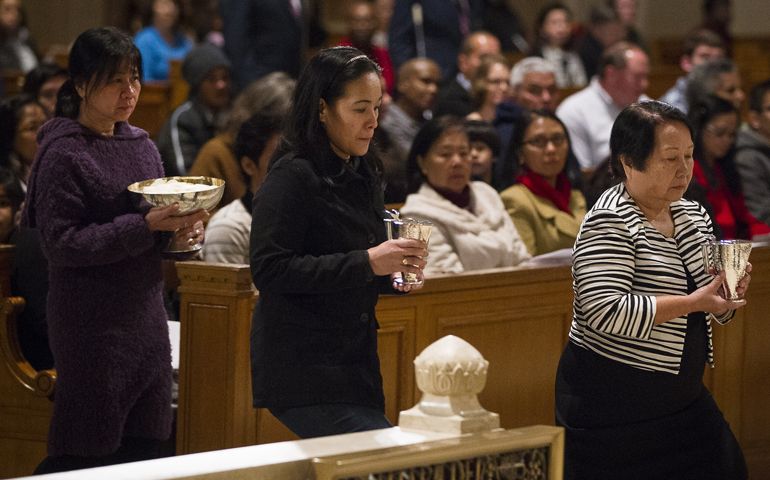 Survivors of human trafficking carry offertory gifts during at Mass celebrated Sunday at the Basilica of the National Shrine of the Immaculate Conception in Washington to mark the International Day of Prayer and Awareness Against Human Trafficking. (CNS/Tyler Orsburn)

Washington — Highlighting the life, suffering and enduring hope of St. Josephine Bakhita, a Sudanese slave, Washington Auxiliary Bishop Martin Holley called for reflection and action to combat modern-day slavery during his homily on the first International Day of Prayer and Awareness Against Human Trafficking on Sunday.

We must "do everything in our power through the corporal and spiritual works of mercy to eradicate human trafficking," the bishop told the nearly 1,000 people -- including trafficking survivors -- gathered for the noon Mass at the Basilica of the National Shrine of the Immaculate Conception in Washington.

Held on the feast of St. Josephine, the day was designated by the Pontifical Council for Justice and Peace and the International Union of Superiors General. Last year, the U.S. Conference of Catholic Bishops' Migration and Refugee Services organized a national day of prayer for victims and survivors of human trafficking, and it spearheaded this year's liturgy at the shrine.

The day offered the fruits of "compounded prayer" and was an opportunity to shed light on a pervasive tragedy, said Hilary Chester, associate director of the U.S. bishops' anti-trafficking program, in an interview Friday.

According to the U.N. International Labor Organization, there are nearly 21 million human trafficking victims worldwide.

Chester said that while there has been increased education and awareness, human trafficking is increasing.

In the United States, victims of labor trafficking are "all around us" in poorly regulated industries like agriculture, in-home domestic work, nursing home work and the food-service industry. Sex trafficked victims can be foreign nationals, but they also are U.S. citizens, often children who are in abusive homes or foster care situations.

"You see it all across the board," Chester said in an interview with the Arlington Catholic Herald, newspaper of the diocese of Arlington, Va.

In his homily, Holley told the story of St. Josephine, who was born in 1869 and enslaved as a child. Beaten and whipped nearly every day, young Josephine eventually was taken to Italy and freed with the help of the Canossian Daughters of Charity, an order she later joined. Canonized in 2000, she has been proposed as the patron saint of victims and survivors of human trafficking.

The bishop emphasized that human trafficking involves everyone and quoted Pope Francis' apostolic exhortation Evangelii Gaudium ("The Joy of the Gospel"). The pope writes that many are guilty of "comfortable and silent complicity" in relation to the crime and have "blood on their hands."

The pope addressed the global issue during his Sunday Angelus, asking government leaders to act decisively "to remove the causes of this shameful wound ... a wound that is unworthy of civil society."

About a dozen women who know such wounds firsthand were present at the shrine Mass and helped carry up the gifts during the offertory.

The women, all highly educated teachers from the Philippines, were lured to the United States by recruiters with promises of a better life.

Because of corruption and a poor economy in the Philippines, may people are forced to migrate, according to Jo Quiambao, secretary general for Gabriela DC, a grassroots organization that works with Filipina human trafficking survivors.

Illegal recruiters use sophisticated tactics to exploit the situation in the island nation, and high-level government agencies are involved, often approving fraudulent travel documents, said Quiambao during a reception after Mass.

Such was the case with around 300 women -- 200 now in D.C. -- who were promised lucrative teaching jobs in the United States. After selling their homes and exhausting their savings to come to the states, the women found themselves jobless, moneyless and with illegal status.

The U.S. bishops' anti-trafficking program, carried out through MRS, is working with Gabriela DC to connect the women to social services and to educate and empower them.

Quiambao said the international day of prayer is "essential because it helps survivors heal, and because they are encouraged by knowing other people care -- that they are not alone." She said it also affirms the need to speak out against the crime.

Along with Gabriela DC, a number of representatives from coalitions and organizations attended the Mass, including the Mid-Atlantic Coalition Against Modern Slavery. Composed primarily of women religious, it focuses on advocacy and education while providing some direct service to victims.

Coalition member Sr. Carol Ries, of the Sisters of the Holy Names of Jesus and Mary, said human trafficking is an issue that should be close to all Catholics' heart. It's a "pro-life issue," she said. "It's about respect for women and children; it's about human rights."

In partnership with the USCCB, Catholic Charities USA and Catholic Charities of the Washington archdiocese, the National Catholic School of Social Service at The Catholic University of America in Washington will host a two-day conference on human trafficking this July. Will Rainford, dean of the school, said the conference will raise awareness among priests, diocesan leaders and lay staff who come into contact with victims.

Chester hopes this year's day of prayer motivates "Catholics in the pews" to discern their own ability to fight human trafficking, whether through volunteering, material donations, awareness-raising or working to change and enforce laws. "There are a lot of opportunities," she said, "where people can start making a difference."

Ahead of the World Cup, Brazil’s churches work to protect children from sex abuse