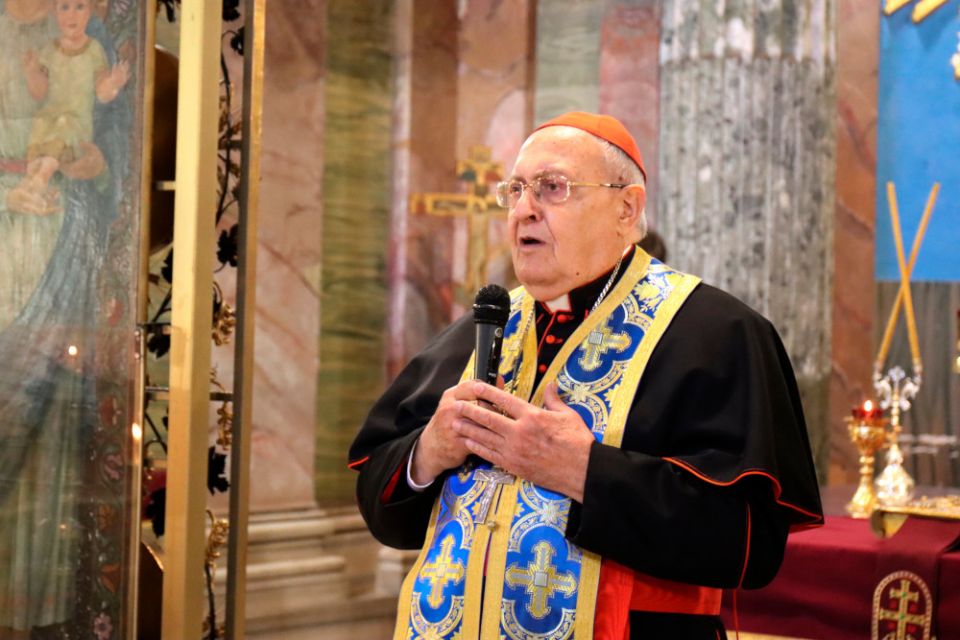 Cardinal Leonardo Sandri, prefect of the Congregation for Eastern Churches, prays for peace in Ukraine during a prayer service at the Ukrainian Catholic Cathedral of Sts. Sergius and Bacchus in Rome March 2, 2022. At a Mass April 5 in Orvieto for members of Italy's Finance Police, Cardinal Sandri spoke about leaders who yearn for their nation's "imperialist" past and commit horrendous crimes in an attempt to recover it. (CNS/Rostyslav Hadada, Ukrainian Catholic Excharate of Italy)

Vatican City — Without naming names, Cardinal Leonardo Sandri lamented how a national leader, yearning to restore "a past of imperialist power," can sow death and destruction.

The cardinal's apparent reference to Russian President Vladimir Putin and his invasion of Ukraine came during a homily April 5 at a Mass in Orvieto with officers and cadets of Italy's Finance Police, who were attending an anti-terrorism training course.

Before celebrating the Mass, Cardinal Sandri, prefect of the Congregation for Eastern Churches, gave an overview of the situation facing Eastern Catholics in Syria, Iraq and Ukraine, his office said.

The Old Testament reading at the Mass recounted how the Israelites complained to Moses and to God after they had been led out of Egypt and slavery and, the cardinal said, seemed almost to long for what they had when they were enslaved.

Those who are focused on something from the past, he said, "are incapable of seeing and interpreting the present, and for this reason they have no future."

"Even in our day, among the powerful of the nations there are those who are blinded by a view of a past of imperialist power and, poisoned by this vision, they are capable of spreading death and devastation, trampling on the lives and dignity of those who are attacked," Cardinal Sandri said.

They also sully the dignity "of those who are asked by obedience to stain themselves with such horrendous crimes," he said.

The scenes of war and destruction, he said, show "how wise and prophetic" Pope Francis was when he called, in the encyclical "Fratelli Tutti," for greater efforts to build a world where the dignity of every person and the fact that all are brothers and sisters is emphasized and defended.

Respect for human dignity and kinship, he said, is the only way "to build a new civilization in which peace, mutual respect, conciliation and dialogue are lived daily."

"None of us alone has the strength to intervene and change the minds and hearts of others," the cardinal said, "but we can certainly start each day by watching ourselves and learning to always look outside ourselves, seeking and spreading seeds of peace and justice, virtues that you must certainly cultivate as members of the Finance Police."