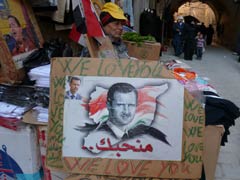 Up until just weeks ago, President Bashar al-Assad was popular with the Syrian public. But a harsh government response to recent pro-democracy demonstrations may put an end to signs such as this one on a street in Damascus. (Margot Patterson)

DAMASCUS, SYRIA -- Up until recently, it seemed as if the turmoil going on in other parts of the Arab world might pass Syria by. When I arrived for a weeklong visit, Syria was still quiet. When I asked Syrians what they thought of the upheaval occurring in other countries in the region and whether it might come to Syria, people shook their heads and said no. “The situation is different in Syria,” they told me.

And then, in a matter of days, things changed.

Arrests of teenagers scribbling antigovernment graffiti on a wall in Daraa sparked a protest movement that began drawing hundreds, even thousands, of demonstrators in several Syrian cities.

“He should get rid of all of his family,” a storekeeper said of Syria’s president Bashar al-Assad. “Because the people love him but not his family, who have been stealing from this country.”

Damascus is a city that works late. People still throng the souks of Old Damascus at 8 or 8:30 at night. On my last evening in Damascus, a storekeeper was watching scenes of protest from the southern Syrian city of Daraa on television when I walked in from the dark street outside.

“It’s like the fashion in the Arab world now, so we should have a taste of it too,” he said when I asked him about the clashes shown on TV. “This is something new for us here. Syria has been quiet for 41 years.”

In 1970, Hafez al-Assad came to power, ushering in a period of stability despite, or maybe because of, his repressive rule and Syria’s volatile mix of religions and ethnicities. “Every fifth Syrian is a schismatic,” Martha Neff Kessler, an analyst for the CIA for 30 years and the author of Syria: Fragile Mosaic of Power, said half-jokingly of the religious diversity found in Syria.

About 74 percent Sunni Muslim, the population also includes Shiites, Alawites, Druze and Christians. The latter constitutes about 10 percent of Syria’s 21 million people and ranges from Greek and Syrian Orthodox to Maronites, Greek Catholics, Melkites, Armenian Catholics, Syrian Catholics, members of the Armenian Apostolic church and the Assyrian church, and others. Most Syrians are Arabs, but Kurds, Turkmen, Circassians, Armenians and, since the war in Iraq, more than 1 million Iraqi refugees also live in Syria.

The refugees are a walking lesson in what could happen if Syria, like Iraq, were to fracture along sectarian lines.

“The question of civil war weighs on the Syrian mind far more than it does on those in Egypt and Tunisia,” said Murhaf Jouejati, a native of Syria and a professor of Middle East Studies at the National Defense University in Washington, D.C. He contrasted the homogenous societies of Egypt and Tunisia with the heterogeneous nature of Syrian society.

“They’ve had to develop policies to knit these groups together, and I think they’ve done a pretty good job of it,” Kessler said of the Syrian government. “It all goes back to Baathism. Baathism has a terrible reputation in this country, but if you read the Syrian constitution it sounds much like our own. ... The government has used Baathism to encourage people to move out of their tribal, ethnic and religious identities.”

Despite inevitable tensions, Syrians seem proud of the religious pluralism and tolerance of their society. “The church ringing the bells as the imam is calling the Muslims to prayer -- that is Syria,” one man said to me. A French religious who has lived in Damascus for 16 years said Syria is the best place for Christians to live in the Middle East.

Bashar al-Assad took over the presidency from his father after Hafez al-Assad’s death in 2000. Trained as an ophthalmologist, Bashar was not expected to succeed his father, but after his brother Basil’s death in a car accident in 1994, he became the new heir apparent. For 30 years, Hafez al-Assad ruled the country with an iron grip. The secular government he presided over relied for support on an alliance of religious minorities, the Alawites and the Christians, backed by a prosperous Sunni merchant class. A Gnostic sect that’s an offshoot of Shiism and is considered by many Sunni clerics outside Islam, the Alawites drink wine, do not worship in a mosque, have their own sacred text in addition to the Quran, and believe the stars in the sky are the souls of those who have died. In the past an impoverished minority, the Alawites have flourished since the Assad family, who are Alawites, came to power. Alawites hold key positions in the military.

“People think he’s doing his best,” said a businessman in Aleppo. He estimated that 95 percent of Syrians would be apprehensive if the regime were to be overturned. The question for Syrians is, who would follow?

Assad has championed economic development, not democratization. For many, probably most Syrians, the economy is paramount. Many people work two jobs, especially those working in the bloated but underpaid public sector. Per capita gross domestic product is about $2,500.

“The Syrian economy is in a transition stage from a command economy to a market economy. We are late in moving, but at least we are actually moving,” said Dr. Nabil Sukkar, managing director of the Syrian Consulting Bureau for Development and Investment in Damascus and a former senior economist with the World Bank.

“We’re going through the same process other countries went through in the 1980s and ’90s. Overall, we’re doing fine,” Sukkar said, pointing to a recent 5 percent growth rate in the Syrian economy that would have been even higher, he said, but for the worldwide recession, a four-year drought affecting Syria’s agricultural products, and the burden on the economy of the 1.3 million Iraqi refugees in the country.

A 5 percent growth rate is good, but it’s not enough to absorb all the young people graduating from university into the economy, as Sukkar acknowledged. As in Egypt and Tunisia, the two countries where democratic demands toppled the governments there, unemployment is high, particularly among young people. And as Syria has moved from a socialist economy to a free market economy, allegations of corruption have surfaced alongside an emerging crony capitalism.

But Sukkar said important differences exist between Syria and Egypt and Tunisia.

“The regimes in Egypt and Tunisia were not popular. They were heavily dependent on the United States, and they were considered not on the side of people’s aspirations,” he said. “The foreign policy of Syria is in tune with the mood of the Arab street -- against the Israeli occupation, against the U.S. occupation of Iraq, against U.S. hegemony in the region.”

In addition, at least until the recent protests that triggered a government crackdown that has killed at least 100 persons, according to Human Rights Watch, the president has been personally popular.

“He’s seen as an attractive guy who’s trying to change Syria,” said Joshua Landis, director of the Center for Middle East Studies at the University of Oklahoma in Norman and author of the daily newsletter Syria Comment.

But can Assad’s popularity persist in the face of what seems to many a response to democratic demonstrations both clumsy and harsh? Even as the government set up an inquiry into the deaths in Daraa and promised, and then retracted its pledge, to relax the Emergency Laws that have been in place 50 years, more deaths on the street were occurring. In his speech to the public on March 30, Assad offered few concessions to protesters’ political demands. And though older Syrians seem ready to cut him some slack, will the young Syrians in the streets play along?

That last evening in Damascus, I walked along Straight Street, the street where the Bible says Paul resided after he was struck blind. In another store, another shopkeeper was watching the protests on television. He was a courteous older man who tried to interest me in scarves before we spoke of the demonstrators.

“They say they want freedom,” he said.

“Do you think they’ll get it?”

Pope meets with genocide survivor who inspired his Iraq trip

10 years after the Iraq War authorization, what have we accomplished?