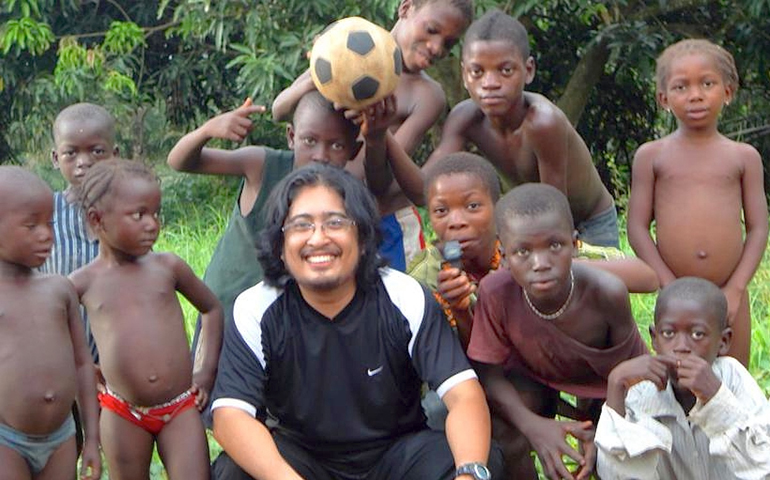 Fr. Russell Lapidez works in Kambai and Kamalo communities in Sierra Leone. He is among four Filipino Augustinian Recollects who are choosing to stay despite the Ebola outbreak. (Courtesy of Recoletos Communications Inc.)

Six Augustinian Recollect missionaries are staying in their Sierra Leone mission to offer people there encouragement and accompaniment and to help battle Ebola, the order announced.

The six -- four Filipinos and two Spaniards ranging in age from 27 to 60 -- serve in two parish communities in the diocese of Makeni in West Africa, one of the high-risk areas of the country for Ebola infection.

They reached their decision to stay after consulting about the situation with the apostolic administrator of the Makeni diocese, Fr. Lauro Larlar, the Philippines provincial of the order, told NCR Monday.

As of Monday, the World Health Organization reported at least 1,145 people have died from the outbreak of the disease among 2,127 confirmed probable and suspected cases recorded by ministries of health of Guinea, Liberia, Nigeria and Sierra Leone. The actual number of cases could run much higher, the WHO statement added.

Three Recollect missionaries who had been on vacation in the Philippines could not re-enter Sierra Leone because of travel prohibitions, Larlar said.

The apostolic administrator gave the missionaries freedom and respected the decision of the group, Larlar said.

The missionaries decided not to leave because they believe they can help more by remaining with the people, he said.

"They are attending to the people; they administer the sacraments, hold daily prayer with the people. That's what we call the apostolate of presence so people will feel they are not abandoned."

"People who are exposed to this virus will feel they are accompanied, that the church suffers with them, the church works for them," Larlar said.

[N.J. Viehland is NCR correspondent based in the Philippines.]