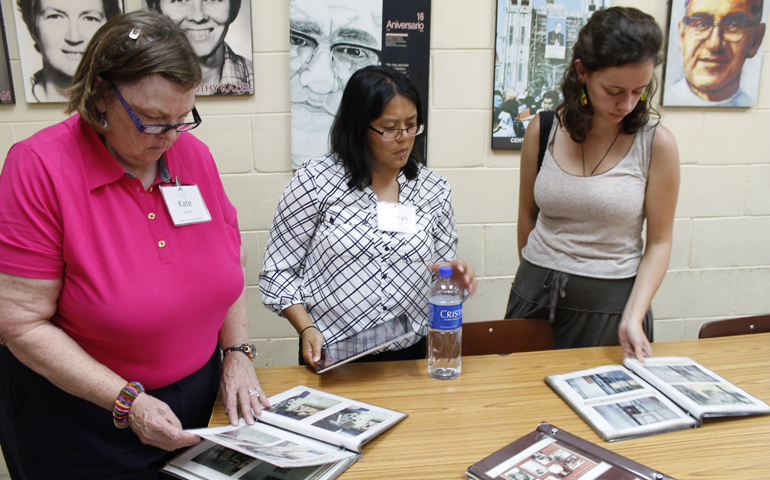 Members of a U.S. delegation interested in learning about the Salvadoran martyrs look at pictures in the Archbishop Romero Center on July 24 at Central American University in San Salvador. (CNS/Edgardo Ayala)

Standing at the edge of the garden where six Jesuit priests were killed in 1989, Echol Nix is clear about the message he is taking home with him to the United States.

"One should not give up ... doing whatever can be done to help those who are the most vulnerable. That's the message I'm taking with me," said Nix, who teaches religion at Furman University in Greenville, S.C.

Julia Elba Ramos, the cook in the Jesuit residence, and her daughter, Celina Meredith Ramos, 15, also were killed by the same military unit.

Nix visited El Salvador July 24-Aug. 1 as part of a U.S. delegation interested in learning about the Salvadoran martyrs' struggles for justice, nearly 25 years after their murders. The delegation was sponsored by the Ignatian Solidarity Network, a national social justice network founded in 2004 and inspired by the spirituality of St. Ignatius of Loyola. It works in partnership with Jesuit universities, high schools, and parishes, along with many other Catholic institutions and social justice partners.

"This trip is an opportunity to deeply understand the history of El Salvador, the history of the martyrs and what their legacy was," Christopher Kerr, the network's executive director, told Catholic News Service.

The visitors participated in forums on the legacy of the six Jesuit and learned about their spiritual life and their extensive academic work as professors or researchers at the university.

"It's almost like making a pilgrimage. ... I'm here to honor what the martyrs did for El Salvador, and in extension for the entire world, by teaching us the importance of education," said Bryan Kokensparger, professor of journalism at Creighton University in Omaha, Neb.

They also visited poor communities in San Salvador and spent weekends in the homes of families in rural towns like Arcatao and Guarjila, in the northern department of Chalatenango. During the civil war, those towns came under military fire for being under guerrilla control.

El Salvador had a bitter civil war between 1980 and 1992, the year that guerrillas of the Farabundo Marti National Liberation Front signed a peace agreement with the government of Alfredo Cristiani, ending a conflict that left about 75,000 dead.

In November 1989, in the context of a large-scale guerrilla offensive, a U.S.-trained commando unit from the Salvadoran army entered the campus of the university, where the priests lived, took them to the garden and murdered them. The two women were murdered inside the residence.

Due to their work toward justice in El Salvador, the Jesuits had been branded "terrorist" by the army and the ultra-right wing sectors in the government.

In May 2011, a Spanish judge, Eloy Velasco, issued an international arrest warrant against nine Salvadoran officers accused of plotting to kill the priests, five of whom were Spanish citizens by birth.

However, El Salvador refused to extradite the defendants, shielded in the amnesty law of 1993. But human rights organizations, local and international, have stated that crimes against humanity should not benefit from amnesties.

"It's disappointing that justice has not come yet, but we know who did it, we know what happened, and what's good is that we are moving forward toward seeking justice," Kerr said. "There will be a day when we do see a clear decision to seek justice."

In August 2013, a Boston judge sentenced Col. Inocente Orlando Montano, former Salvadoran security minister and one of the officers accused of the Jesuit killings, to 21 months in prison after finding him guilty of immigration fraud and perjury.

The legacy of the martyrs of Central American University is reflected today in students like Marina Garcia, who studies economics.

"My goal is not merely to get my degree and that's it, but to help to create a society with social justice, as the Jesuits taught," she said.