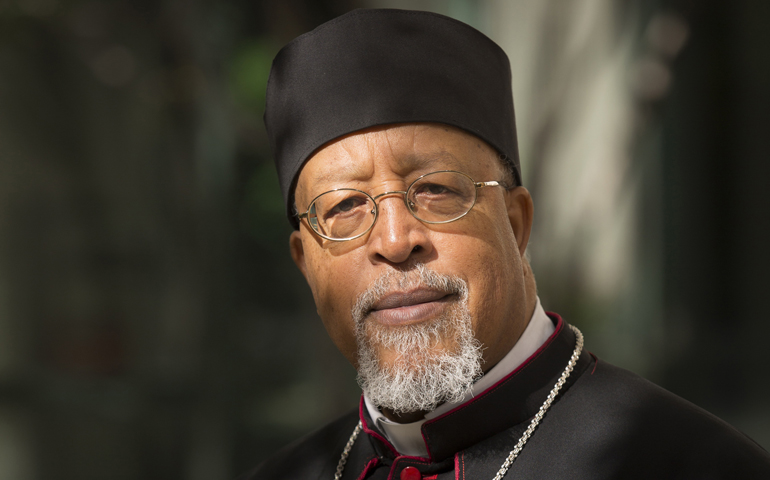 Catholics across Africa are seeking a revitalized church under Pope Francis that is "true to its call to the Gospel and not a power structure," the archbishop-president of one of the continent's national bishops' conferences said.

"That's why the Papal States were given away," Souraphiel said, referring to the vast Italian landholdings controlled by the papacy until the 19th century. The Vatican should be a "moral voice in the world [that is] credible, whether here in the States or in other parts of the world," he said.

Souraphiel spoke Oct. 25 in an exclusive interview with NCR during a luncheon hosted by the Washington nonprofit Catholics in Alliance for the Common Good. The archbishop toured several U.S. cities in late October to garner support for a planned new Catholic university in his archdiocese, which encompasses Ethiopia's capital.

Souraphiel said Pope Francis is drawing particular praise from Africans for his focus on migration issues, especially his statements regarding the Italian island of Lampedusa.

Located off Italy's southern coast, the island is the intended destination for migrants and refugees from Africa who sometimes cross the Mediterranean in dangerously overcrowded or unworthy vessels. An October study by the pan-European migrant network Migreurop estimated that approximately 20,000 people have died in such crossings since the 1990s.

Francis visited Lampedusa on his first visit as pope outside Rome on July 8 and has on several occasions criticized the world's response to migration issues. In a speech Oct. 3, the pope said the world's economic system is "inhuman" and treats people unfairly.

Souraphiel said he first met the pontiff during a trip to Rome about two weeks ago and prayed with him for the victims of the sea crossings.

"[The pope] is touching all Africans because he was there in Lampedusa before the accident," Souraphiel said. "He went there to visit purposefully. Now, the president of the European Union is going, prime ministers are going -- more attention is given to the whole issue of migration because of the Holy Father."

Souraphiel said across his continent, Africans "have great respect and great love for the Holy Father because of the emphasis he's putting on the poor, on the migrants, on the disabled, and on the simplicity of life."

The Ethiopian archbishop said he equates the pope very closely with his 13th-century namesake, St. Francis of Assisi.

Referring to the historical story that the saint became inspired to found his religious order after hearing an apparition of Jesus tell him to "repair the church," Souraphiel said the saint was asked to repair "not the physical structure, but to revive the church."

Souraphiel's Addis Ababa archdiocese stretches over the central quarter of Ethiopia and borders Sudan and South Sudan to the west and Djibouti and Eritrea to the west. Ethiopia, thought to have been the home of one of the earliest Christian communities, has a population that is 63 percent Christian.

Catholics, however, make up less than 1 percent of that population, with the majority -- approximately 44 percent -- saying they belong to an Eastern Orthodox community. About 34 percent of the population identifies as Muslim.

Catholics in Alliance for the Common Good hosted the luncheon Oct. 25 in conjunction with Friends of the Ethiopian Catholic University, a D.C.-area group raising money for the project.

The group was founded by Archbishop Silvano Tomasi, the Vatican's ambassador to the U.N. offices in Geneva and a former Vatican ambassador to Eritrea and Ethiopia. Its co-chairs are Peter Allgeier, a former Deputy U.S. Trade Representative, and Fred Rotondaro, the chair of Catholics in Alliance for the Common Good.

Called the Ethiopian Catholic University of St. Thomas Aquinas, the Addis Ababa university opened its academic programs in 2008 and currently offers courses in social work, information technology and medical technology. The university is temporarily housed in the archdiocesan cathedral while construction continues on academic buildings, located on a 60-acre plot the Ethiopian government gave to the project.