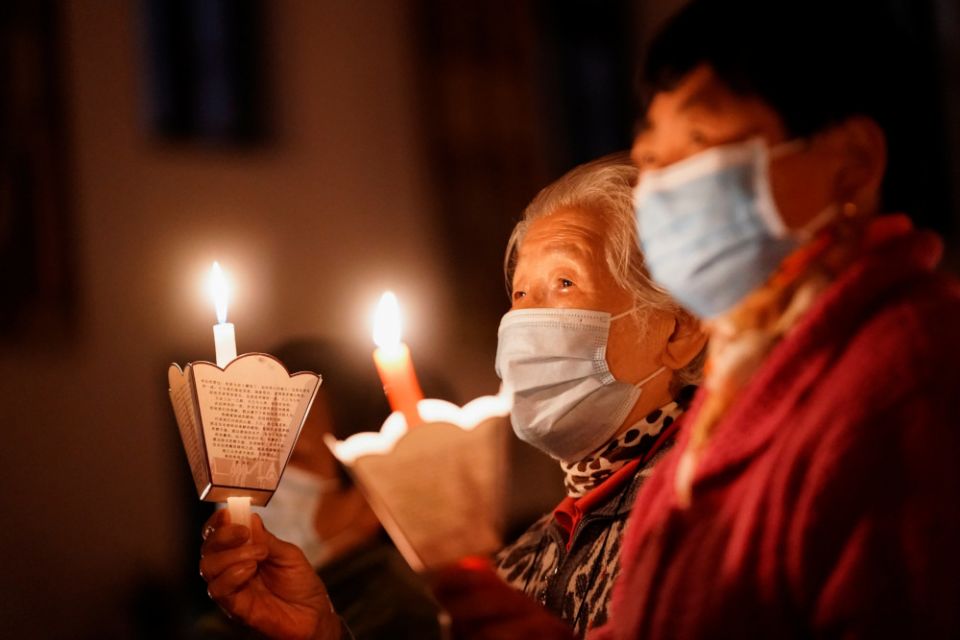 Worshippers wearing protective masks pray during the Easter Vigil at a church in Shanghai April 3, 2021, during the COVID-19 pandemic. Fears are rising over China's looming rising crackdown on Catholic and Protestant church leader that authorities deem illegal. (CNS/Reuters/Aly Song)

The recent arrest of a Vatican-approved bishop, priests and seminarians in north-central China came as a shocking development, if not surprising, as religious persecution in the communist-led country has continued to intensify under President Xi Jinping.

Police arrested Bishop Joseph Zhang Weizhu of Xinxiang May 21, a day after authorities detained seven priests and an unspecified number of seminarians. They are accused of violating new regulations governing religious affairs.

The bishop and the priests drew the ire of authorities by using an abandoned factory as a seminary for the formation of priests, ucanews.com reported.

They are charged with breaching new rules, implemented in May, which require all clergy to register with the state in order to serve Catholics while asking Catholics to elect their bishops democratically.

The rules also make it illegal to perform religious activities, including worship in places not registered or controlled by the state.

The arrests sparked condemnation from Christian and rights groups.

"These arrests ... appear to confirm fears that restrictions on religious communities will continue to tighten," Thomas said. "We call for the immediate and unconditional release of these Christians and all those detained across China on account of their religion or beliefs. We also encourage the international community to raise this and other cases of arbitrary detention and harassment of religious leaders."

The organization also noted that prominent Christian leaders such as Zhang Chunlei of the Love Reformed Church and the Rev. Yang Hua of the Living Stone Church in Guiyang were harassed and assaulted before being arrested.

Local authorities closed the Living Stone Church in 2016 and the Love Reformed Church in 2018. The leaders were detained after being accused of fraud and illegally running unauthorized organizations.

Yang was beaten so badly by a local leader of the Chinese Communist Party in a Guiyang police station that he had to be hospitalized.

Zhang has faced the ire of authorities for decades. China has never recognized Xinxiang as a diocese since it was erected by the Vatican in 1936. Ordained secretly in 1991, Zhang was not approved by the state-aligned Bishops' Conference of the Catholic Church in China and Chinese Catholic Patriotic Association.

The bishop has been pressured by the state for years largely because of his allegiance to the pope and refusal to join the state-aligned open church. He has been arrested several times, but was later released. The diocese has been in the custody of a government-appointed administrator since 2010.

The whereabouts of Zhang, the priests and the seminarians are unknown.

There are rising fears among China watchers that the communist regime has been moving slowly to crush religious groups, including Catholic and Protestant churches that it deems illegal and a threat to party rule.

The Christian Post reported in May that Chinese authorities have been removing Bible apps and Christian WeChat public accounts. International Christian Concern reported that printed Bibles are no longer available for sale online, adding that Bible apps can only be downloaded in China with the use of a virtual private network.

The report quoted the testimony of Li Yusee, a pseudonym for a member of a Christian "house church" in Sichuan province. Li said he was held in a secret facility run by the United Front Work Department of the Chinese Communist Party in collaboration with the secret police after a 2018 raid on his church.

"It was a mobile facility that could just set up in some basement somewhere. It was staffed by people from several different government departments," Li said, adding that it had its own political and legal affairs committee working group and mainly targeted Christians who are members of house churches.

Li said he was detained in a windowless room for nearly 10 months, during which time he was beaten, verbally abused and "mentally tortured" by staff.

The chilling account resembles the detention and persecution of ethnic Uyghurs Muslims and other banned religious and cult groups such as Falun Gong and the Church of Almighty God.

China's repressive policies and actions against religious groups have been documented by global watchdogs.

On Jan. 13, the U.S.-based Christian group Open Doors published a "World Watch List" that assessed 50 countries where Christians face the most severe forms of persecution. It listed China, at number 17, among the top 20 countries because of a widespread crackdown on Christians and other religious minorities.

"The policy of 'Sinicizing' the church has been implemented nationwide as the [communist party] limits whatever it perceives as a threat to its rule and ideology. Thousands of churches have been damaged or closed. In some parts of China, children under the age of 18 aren't allowed to attend church — part of the country's efforts to stunt future growth," Open Doors reported.

Sinicization aims to impose strict rules on societies and institutions based on the core values of socialism, autonomy and supporting the communist party leadership.

In its 2021 report, the U.S. Commission on International Religious Freedom observed that China continues to persecute Christians and harass Catholic bishops despite the 2018 Vatican-China agreement on bishop appointments.

Under the deal, which was renewed last year, the Vatican recognized eight bishops ordained by the state without papal mandate. However, China did not recognize a number of Vatican-approved bishops, including Zhang.

"Despite the Vatican-China agreement on bishop appointments, Chinese authorities continued to harass, detain and torture underground Catholic bishops ... who refuse to join the state-backed Catholic association," the report said. "They also harassed, detained, arrested and imprisoned members of Protestant house churches who refuse to join the state-sanctioned Three-Self Patriotic Movement."