As fighting continues in Myanmar, thousands take refuge in churches 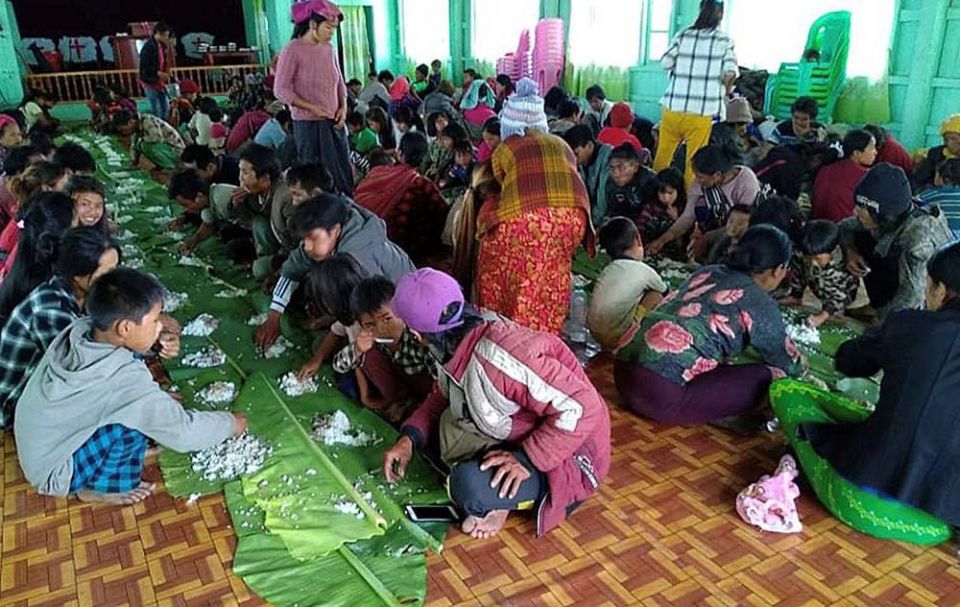 People displaced by fighting in northwestern Myanmar eat at a shelter in Chin state May 31. (CNS/Reuters)

Ucanews.com reported Catholic and other Christian churches have become the main refuge for thousands of people forced to flee from their homes during conflict in Kayah, Chin, Kachin and Shan states.

Churches and convents have opened their doors to fleeing civilians, especially the elderly, children, women, the sick and disabled, regardless of religion and race.

However, some people had to flee into the jungles when three churches were shelled by the military.

"We are arranging a safe sanctuary for those who are in the jungles by building a temporary camp in the seminary in Loikaw," Soe Naing told ucanews.com.

Three churches in the Loikaw Diocese were struck by military shelling within two weeks, with a May 23 attack on Sacred Heart Church killing four people and wounding eight others, despite white flags flying on top of the church.

In the Pekhon Diocese, around 10,000 people are taking refuge in five churches despite four parishes in one township having been totally abandoned due to intense fighting in Shan. The diocese's Sacred Heart Cathedral and Marian shrine also came under fire from the military in May.

Bishops recently appealed for places of worship not to be attacked and for people seeking refuge to be protected.

"Kindly observe the international norms of sanctuary in war times: Churches, pagodas, monasteries, mosques, temples, schools and hospitals are recognized as neutral places of refuge during conflict," they stressed.

In impoverished Chin state in western Myanmar, thousands of people have fled into the jungles, while others, mostly Christians, have taken refuge at churches.

Fr. Joseph Se Thang, parish priest of Sacred Heart Church in Mindat, said around 120 people, mainly the elderly and women, were in the church compound after leaving the jungles.

More than 1,200 people have taken refuge at churches in surrounding parishes where they have received shelter, food and medicine.

"I appeal to local military commanders to lift road blockages to allow for humanitarian aid as thousands of people face running out of food," Se Thang told ucanews.com.

Fighting has been escalating in Kayah, Shan, Chin, Kachin and Karen states between the military and ethnic armed groups and local resistance groups known as the People's Defense Forces since the Feb. 1 coup that has led to more than 175,000 people being displaced.

Christians are a minority in predominantly Buddhist Myanmar, accounting for 6.2% of its 54 million people.

Areas occupied by the Kachin, Chin, Karen and Kayah, who have been facing oppression and persecution at the hands of the military for decades, are largely Christian.

UN investigator: Myanmar is not safe for Rohingyas to return