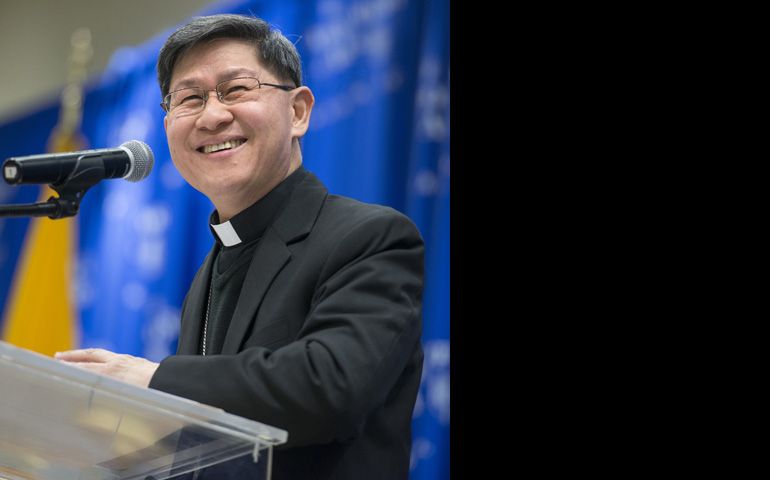 Rome — Cardinal Luis Antonio Tagle of Manila, Philippines, has been named the new president of the Catholic Biblical Federation.

While Tagle was elected unanimously as head of the federation at an Oct. 24-25 meeting in Rome of its executive committee, Pope Francis confirmed his election March 5.

He will assume his office at the federation's plenary assembly, to take place June 18-23 in Nemi, Italy. Tagle will succeed Italian Archbishop Vincenzo Paglia, who has been president of the Catholic Biblical Federation since 2002.

Paglia is president of the Pontifical Council for the Family and has been the chief promoter of the sainthood cause of Salvadoran Archbishop Oscar Romero, who was assassinated in 1980.

Tagle was born in Manila on June 21, 1957, to a Chinese mother and Filipino father in a family devoted to the Catholic faith. He studied philosophy at St. Joseph's Seminary in Manila and graduated from the Athenaeum of the University of Manila. He was ordained a priest for the Manila archdiocese in 1982.

For some time, he ministered in parishes and seminaries -- in one of which he was rector. He was sent to The Catholic University of America in Washington (1987-91) to complete his studies, receiving a doctorate in theology, defending his thesis on the notion of episcopal collegiality according to the Second Vatican Council and the influence of Blessed Paul VI on Vatican II. In 1997, he was appointed as a member of the International Theological Commission.

In 2001, St. John Paul II appointed him bishop of the diocese of Imus, Philippines, which has 2.6 million Catholics. In 2011, he was appointed archbishop of Manila. He was elevated to cardinal the following year.

He has participated in the 1998, 2005, 2008 and 2012 synods at the Vatican. In the 2008 synod on "The Word of God in the Life and Mission of the Church," he was an active participant, uttering the statement: "A church which does not listen to the poor cannot celebrate the word of God".

Tagle has a television program "The Word Exposed," which has been running in the Philippines since 2008. There, each week, he comments on the readings of the Mass for the following Sunday. He is a singer and composer, with some videos of him performing his songs on YouTube. He is also reputed to be the most popular cardinal on Facebook.

Time of the Hunger Moon: saints, wolves and the global pandemic

Pope Francis heads to Bosnia as 'brother messenger of peace'