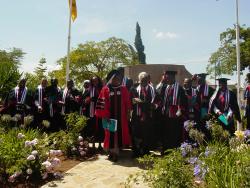 Leaving Nairobi, with its traffic-choked streets, swanky buildings and vast slums, one heads west on Lang'ata Road toward the town of Karen, once the expansive farm of Karen Blixen of Out of Africa fame. There in sight of the Ngong Hills is a "little Vatican": Some 40 religious communities have established residences in the surrounding countryside. Among them one finds a unique experiment in religious education, Tangaza, a constituent college of the nearby Catholic University of Eastern Africa. As Tangaza College's gate swings open, a large statue of Mary, depicted as an African woman, comes into view, symbol of both the Annunciation and the college's motto -- "Tangaza fumbo la imani," or "Proclaim the mystery of faith." In myriad ways Tangaza does exactly that.

Twenty-three years ago Tangaza began as a bold adventure, born of necessity. Three religious congregations pooled faculty and resources in order to take on the education of some 20 students. Today Tangaza has 21 religious congregations as corporate members and enrolls 1,200 students, men and women, religious and lay, mostly Catholics, but with other Christians and a few Muslims among them. This student population includes representatives of most of Kenya's 40-plus ethnic groups and others from Asia, Europe and the rest of the African continent.

Students come to earn a variety of diplomas, certificates and degrees delivered through seven separate yet cooperative entities: a school of theology and institutes of social ministry, spirituality and religious formation, social communication, African studies, youth ministry and teacher education. The college houses what is reputed to be among the best theological libraries in Africa: Its size more than doubled in recent years after the Vincentians decided to close Mary Immaculate Seminary in Northampton, Pa., and donate its excellent library to Tangaza.

Student diversity and distinctive academic focuses are held together at Tangaza by a common purpose: to proclaim the mystery of faith in the African context by promoting academic excellence and personal transformation.

Among Kenya's 36 million people, approximately 80 percent are Christians of one sort of another. Roman Catholics are represented in almost all the major ethnic groups and make up about 26 percent of the population, a similar percentage to that in the United States. Divisions within the country mainly occur not over religion, but ethnic allegiance.

At Tangaza, where unity is emphasized, those divisions tend not to be prominent. When violence broke out after the disputed presidential elections of December 2007 and more than 1,000 people were killed and some 600,000 were displaced, Tangaza students returned to the college to create a ritual of healing. A peace pole, festooned with the word peace in multiple languages, was erected. It continues to stand as a sign of their commitment to work to end Kenya's endemic divisions.

Tangaza College prides itself on being creatively responsive to emerging needs, both religious and academic. After several years of planning, in December the college graduated its first class of undergraduate adult learners in a partnership with Chicago's School for New Learning at DePaul University. Limited opportunities for adult education in eastern Africa have a particularly negative impact on Kenya's approximately 2,000 women religious, who historically have served in teaching and health ministries but who now are establishing new ministries for which they need preparation. Additionally, they are taking responsibility for the management of their own complex religious congregations.

According to Sr. Loretta Brennan, an Australian Brigidine and coordinator of the new Tangaza/DePaul program, women religious will increasingly play an important role in strengthening religious and civic life in Kenya. More than half of these sisters are allied to international religious congregations; the rest are members of local Kenyan communities. With the declining membership of international orders in Europe and the United States, the historic financial support for their African counterparts has diminished.

In response to the need for expanded forms of education for these women, Tangaza, under the auspices of the Institute of Spirituality and Religious Formation and in partnership with DePaul, created a new program that would offer an undergraduate liberal arts degree with a focus area in leadership and management for adult learners.

The program's first 14 graduates, 10 of whom were religious women and men and four lay with an average age of 35, received their bachelor's degrees at a joyful commencement ceremony attended by DePaul officials, including DePaul's president, Vincentian Fr. Dennis Holtschneider, who conferred degrees. In order to signal the future direction of the program, the commencement address was given by Sr. Marie Therese Gacambi, superior general of the Assumption Sisters of Nairobi, who holds a doctorate in spirituality from Duquesne University in Pittsburgh and is president of the Association of Sisterhoods of Kenya and a leader of educational policy and reform in Kenya.

The Tangaza/DePaul partnership is advantageous for both institutions. Vincentians have had a longtime presence in Kenya, and the university sponsors both undergraduate and graduate study-abroad programs there. DePaul's innovative and nationally recognized School of New Learning saw this partnership as an opportunity to promote adult learning in Africa.

On the other hand, Tangaza's Institute of Spirituality and Religious Formation, then under the directorship of Brennan, offered two-year undergraduate diplomas, but recognized the need to further the education of its graduates, all adult learners, many of whom were women religious.

In order to establish their partnership and to garner support for women religious in this tuition-dependent program, DePaul and Tangaza secured a major grant from the Los Angeles-based Conrad Hilton Foundation.

The program's goal is to insure both a solid theological and pastoral foundation and a well-rounded liberal arts education with a focus on leadership and management. Admission is contingent on completion of a specified two-year college-level diploma. Students then undertake a full-time 18-month program in order to complete their undergraduate degree. The curriculum is competency-based, and credit is given for prior learning experiences. Courses range from critical thinking, professional writing, and research methods, to information technology, project planning, management and financial accounting. Students also explore issues of public health and the environment, and study comparative and applied ethics.

The program is shaped around individualized learning, a personalized approach to gaining competencies, and inculcation of learning as a way of life. It has mostly African faculty, approved and accredited by DePaul's School of New Learning, and is offered at Tangaza tuition rates. Small classes, extensive faculty feedback, emphasis on engaged learning and student discussion make this program exemplary.

"What is significant for me," said Brennan, "is that every student who comes to the program is passionate about his or her focus area. They enter the program already focused on a social issue around leadership and management that they want to study and research. I think this is unique here in Africa, where people enroll in undergraduate programs for the sole purpose of getting a degree."

With the dual goals of religious and intellectual formation of adult learners, the program aims to prepare its graduates to take on greater management and leadership responsibility in their religious communities and in civic life. In so doing, it confirms the wisdom of the African proverb: "If you keep your head and heart going in the right direction, you won't have to worry about your feet."

Graduates are not worried about their feet; they are off and running. Although they confess that the program is demanding, requiring them to learn in new ways, they universally attest that they are more focused, confident, empowered and self-reflective. Program participants, both religious and lay, will be working as financial managers, human relations and personnel administrators, youth trainers and employee mentors, in social service arts, and health organizations, as well as in administrating their religious congregations. They consider themselves pioneers, leaders who can effectively help shape the future of Christian life in Kenya.

They are assured of the wisdom of yet another African proverb: "A tree is strong because of its roots." Their roots were nurtured at Tangaza in alliance with DePaul. They, much like Kenya's mugumo tree, have deep roots and wide-spreading branches enabling them, as this wild fig tree does, to withstand drought in its many forms as they proclaim the mystery of faith in east Africa.

Dana Greene is dean emerita of Oxford College of Emory University in Atlanta.

Printed in the March 6 Colleges and Universities section of NCR.

A 'time of crisis' for Poland's Catholic Church

Going to the border as a witness