Skip to main content
News
This story appears in the Francis in Turkey feature series. View the full series. 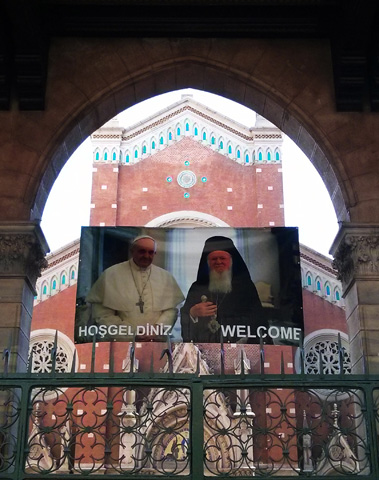 A poster displayed outside of a Catholic church in Istanbul welcomes Pope Francis, who will meet with Ecumenical Patriarch Bartholomew of Constantinople, right, on his trip to Turkey. (CNS/Nathalie Ritzmann)

Pope Francis will wade into a complex mix of ecumenical, interreligious, and global political affairs as he visits continent-straddling Turkey through the weekend.

But one issue sure to be central to the trip -- which will see the pontiff stop Friday in the political capital of Ankara before heading to the historic Christian center of Istanbul on Saturday and Sunday -- is dialogue between Christians and Muslims.

Of the 76 million people who live in Turkey, 97 percent identify with the Islamic faith. And given the country's position in Asia (bordering Syria and Iraq to its east) and Europe (bordering Greece to the west), it is seen as a key testing ground for interreligious encounter, especially in the face of the violence being perpetrated by the Islamic State group.

After greeting Turkish president Recep Tayyip Erdoğan in Ankara on Friday afternoon, Francis is to meet with the head of the country's Presidency of Religious Affairs, a government ministry known commonly as the Diyanet that is charged with providing and regulating religious services in Turkey.

One Turkish academic said the pope's visit could be a chance to repair what has effectively been eight years with little substantial Catholic-Muslim dialogue in the country -- which from there could spark wider dialogues throughout the region.

Hakan Olgun, an associate professor of theology at Istanbul University, said Francis has an opportunity first of all to mend divisions created in Catholic-Muslim dialogue after Pope Benedict XVI's 2006 speech in Regensburg, Germany.

In that speech, the pope quoted a 14th-century Byzantine emperor who had criticized forced conversions of Christians to Islam, then generalized that the religion itself was "bad and inhuman."

Benedict's speech "deeply hurt Muslims," and his visit later in 2006 to Turkey "was not enough to overcome the disappointment," said Olgun, a Muslim who has focused his research on the Protestant Reformation and conducted an interreligious dialogue project in 2006 with 30 other scholars at the Diyanet.

"The interreligious dialogue process in Turkey, initiated by [Pope] John Paul II, ended with the speech of Benedict XVI," he continued. "This issue also quietly withdrew from not only [from the] public's agenda but also the academic field."

Olgun said economic and social reality in Francis' native Latin America are "largely similar" to those in Turkey.

"Pope Francis can turn a new page in the way of dialogue," he said.

Francis, he said, "may criticize secularization, limitless consumption, limitless freedom, unfair share [of goods], injustice and dictatorship, and thus he can provide a common ground for dialogue with Muslims again."

A. Rashied Omar, a U.S.-based academic and Muslim leader, also said the pope's visit could serve to boost dialogue between the two faiths but placed emphasis on the need for his religious leaders to reciprocate Francis' efforts.

Saying that Christian-Muslim relations "have reached one of its all-time lows" because of "unjust global geopolitics and the attendant rise of religious extremism," Omar said Francis' trip "could serve as source of healing and reconciliation between Christians and Muslims."

"In order to maximize this invaluable opportunity for dialogical engagement ... however, Muslim leaders in particular need to do much more to reach out, engage and embrace Pope Francis' invitation to interfaith dialogue and solidarity," said Omar, a scholar of Islamic studies and peacebuilding at the Kroc Institute for International Peace Studies at the University of Notre Dame.

Omar, who also serves as an imam at the Claremont Main Road Mosque in Cape Town, South Africa, said Francis' focus in his papacy on speaking for the globally impoverished and those suffering from violence could create a unique opening for interfaith efforts.

"Pope Francis' papacy has inaugurated a constructive platform for credible Muslim leaders to enter into a renewed dialogue with Catholics on the critical question of interpretations of sacred Scripture and the roots of violence in our contemporary world," he said.

"By locating such a conversation within the broader framework of Pope Francis' theology of compassion for the poor, which offers a powerful social critique of our global culture of consumerism, covetousness and opulence, interreligious dialogue will find even greater resonance among Muslims," he continued.

During Francis' visit to Ankara on Friday, he will meet only with government officials. After visiting the Blue Mosque and the Hagia Sophia in Istanbul on Saturday, he will say Mass for the small Latin Rite Roman Catholic community at the Cathedral of the Holy Spirit.

Following those visits, the pontiff will host an ecumenical prayer and then have a private meeting with Orthodox Christian leader Ecumenical Patriarch Bartholomew I.

The meeting will be the third for Francis and Bartholomew, considered "first among equals" in Eastern Orthodox Christianity, following the patriarch's historic visit to Rome in 2013 for Francis' inauguration and their joint trip to the Holy Land in May.

The two are to meet again Sunday for lunch and are expected to sign a joint declaration about the visit.

Mentioning the trip in his general audience Wednesday at the Vatican, Francis asked those present at St. Peter's Square to pray that "Peter's visit to his brother Andrew may bring fruits of peace, sincere dialogue between religions and harmony in the Turkish nation."

For all the symbolism held in the visit between Francis and Bartholomew, one Orthodox theologian said one of its impacts might also be toward dialogue with Muslims.

Noting the past tensions held among Orthodox Christians and Catholics following the split of the churches in 1054, Aristotle Papanikolaou said the modern meeting of their two leaders shows how reconciliation can be achieved.

"The instability in the region will not be greatly impacted by this visit, but it does point in a small way toward the kinds of efforts that one-time 'enemies' could take toward reconciliation," said Papanikolaou, a senior fellow at and co-founder of the Orthodox Christian Studies Center at Fordham University.

"In that sense, it is a call not simply to Christians but to all peoples to realize a reconciliation that is possible for humans," he said.

Omar, the Muslim imam and theologian, related the pope's trip to accounts that the 13th-century St. Francis of Assisi traveled through the Crusades-era Middle East to seek out a Muslim leader and pursue dialogue.

"It is my sincere hope that Muslim leaders will take up the dialogical invitation and solidarity in a comparable spirit of reverence and hospitality with which the 12th-century Muslim leader, Sultan al-Kamil, welcomed the saint of Assisi from whom the current pope takes his name," he said.