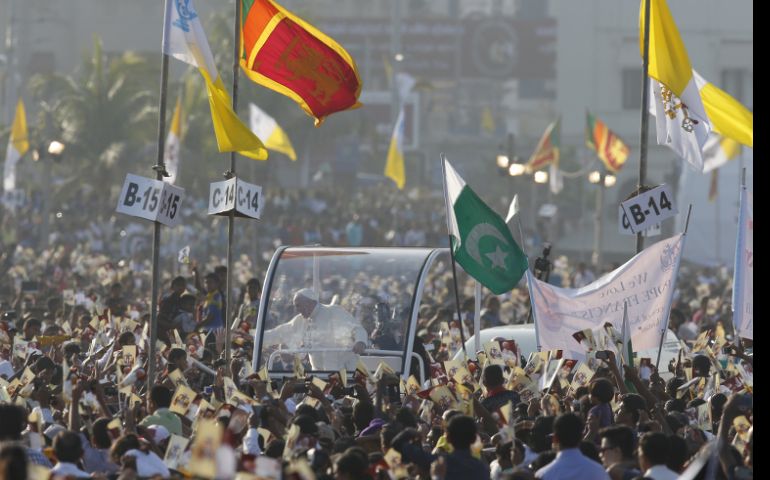 Pope Francis arrives in the popemobile before he celebrates the canonization Mass of St. Joseph Vaz at Galle Face Green in Colombo, Sri Lanka, Jan. 14. (CNS photo/Paul Haring)
This article appears in the Francis in Sri Lanka feature series. View the full series.

The church, the pope said, "makes no distinction of race, creed, tribe, status or religion in the service she provides through her schools, hospitals, clinics, and many other charitable works."

"All she asks in return is the freedom to carry out this mission," he continued.

"Religious freedom is a fundamental human right," Francis said in his homily. "Each individual must be free, alone or in association with others, to seek the truth, and to openly express his or her religious convictions, free from intimidation and external compulsion."

At the Mass, Francis canonized 17th-century Oratorian Fr. Joseph Vaz, an Indian missionary of Portuguese descent who ministered in what was then known as Ceylon.

The pope is spending two and a half days in Sri Lanka, located off the sourthern tip of India. The visit, which started Tuesday, only five days after a contentious presidential election in the country, has been marked so far by several calls for peace and reconciliation between the two main ethnic groups that fought in Sri Lanka's 1983-2009 civil war. The conflict is estimated to have claimed up to 100,000 lives.

Francis' message is apparently being received with open ears. Among the estimated 500,000 people who crowded an outdoor area on the shores of the Laccadive Sea to celebrate Mass with the pope was the country's chief justice, Mohan Peiris.

A Catholic who has also served as the country's attorney general, Peiris said the pope has "given support to our whole program of post-conflict reconciliation."

"I think Pope Francis' visit is a great impetus to achieve the objective of peace, true peace -- with reconciliation amongst our peoples, respect for their ethnic differences and religions," Peiris told NCR.

During his homily, Francis drew on the example of Vaz to show perseverance in pursuing peace and "to testify to the Gospel message of reconciliation."

Calling on Sri Lankans to emulate the saint in three specific ways, Francis said Vaz was "an exemplary priest" who "teaches us to go out to the peripheries, to make Jesus Christ everywhere known and loved."

Francis also said Vaz -- who evangelized in Sri Lanka during a time of control of the country by Dutch leaders who had made Calvinism the state religion -- showed the need to minister to all, regardless of religious affiliation.

Vaz, Francis said, "shows us the importance of reconciling religious division in the service of peace."

"His undivided love for God opened him to love for his neighbor; he ministered to those in need, whoever and wherever they were," the pope said.

After expressing his call for religious freedom, Francis continued: "Genuine worship of God bears fruit not in discrimination, hatred and violence, but in respect for the sacredness of life, respect for the dignity and freedom of others, and loving commitment to the welfare of all."

Wednesday’s papal Mass included prayers and singing in English and the languages of the two main Sri Lankan ethnic groups: Tamil and Sinhalese. Francis gave his homily in English, followed with separate translations into Sinhalese and Tamil by two Sri Lankan bishops.

Crowds celebrating with the pope stretched for blocks, with people pressed into fenced areas to allow passage of the pope's open-air popemobile. While the Christian population in Sri Lanka is a relatively small minority in the country, flags and signs welcoming the pope marked the blocks around the Mass.

One Sri Lankan attorney and public magistrate in the audience for the Mass said Francis' focus on reconciling religious divisions might help Sri Lankans focus on being one country amid their differences.

"We want to keep peace and harmony in one country," Felician Perera said. "With all religious groups, with all ethnic groups -- it's one country."

Francis sought to shore up Sri Lankan attempts at interreligious dialogue Tuesday evening in a meeting with leaders of Buddhist, Hindu, Muslim and other Christian denominations.

During that event, the pope called for dialogue that is "grounded in a full and forthright presentation of our respective convictions."

A priest who used to lead the Colombo archdiocese's office of interreligious dialogue said in an interview that Vaz's example might also play a role in such dialogue, as the missionary is noted for an approach to missionary work that respected the culture of the native Sri Lankans and other religions.

"He's an extraordinary missionary," Fr. Reid Shelton Fernando said. "He worked almost 300 years before Vatican II and some of the ideas he had -- interreligious harmony, interreligious dialogue, and giving a place to the laypeople -- were part of [the council]."

Francis is visiting Sri Lanka in a two-part Asian voyage that will see him continue on to the Philippines on Thursday. Later Wednesday afternoon, the pope is traveling to the north of the country to Madhu, the area most affected by the war's violence.

Perera, the Sri Lankan magistrate, said he would accompany Francis on the trip and said he hoped the pope would take a moment to remember the many bystanders killed in the country's civil war.

Peiris, the Sri Lankan chief justice, said the main message he hears from Francis' call for reconciliation was "that we have to make sure there will never be a repetition of what happened."

"There are lessons to be learned from what happened," he said. "That we must never ever have a conflict of what we saw and that in the future we must learn to live in peace as brothers and sisters of the same family."

Cleanse your hearts of anger, live the Gospel, pope says at Mass in Irbil

US Catholics come to aid of Eastern European churches