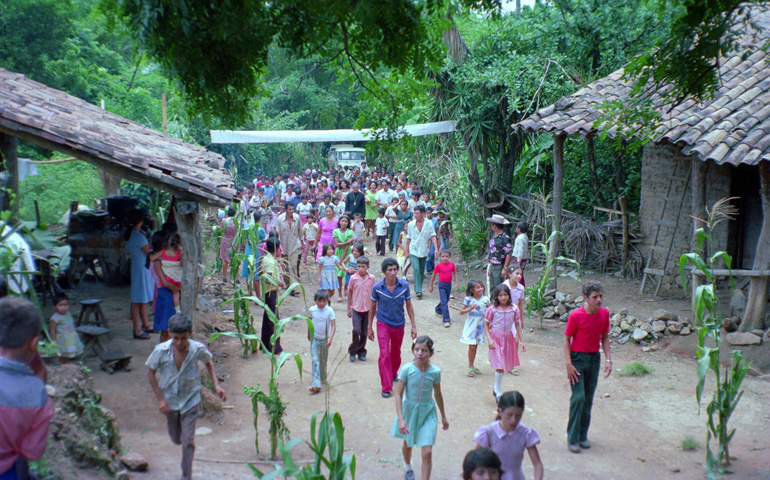 A crowd of people from San Antonio Los Ranchos in Chalatenango, El Salvador, walk with Archbishop Oscar Romero as he arrives to celebrate Mass in 1979. (CNS/Octavio Duran)

Franciscan Br. Octavio Duran captured many of the iconic images of Archbishop Oscar Romero during the final two years of the Salvadoran archbishop's life.

Today, some of those pictures are being recirculated in news reports from the Vatican about Romero's possible recognition as a martyr for the faith.

The recommendation by a panel of theologians advising the Vatican's Congregation for Saints' Causes is a key step in the sainthood cause for Romero, an outspoken defender of the poor during his country's civil war.

On Jan. 8, the panel declared that Romero was killed "in hatred for the faith," voting unanimously to recognize him as a martyr. The next step lies with the cardinals and bishops who sit on the congregation to vote on whether to advise the pope to issue a decree of beatification.

Duran, director of media for St. Anthony's Guild and editor of The Anthonian Magazine in New York City, said he has mixed feelings about the declaration. He is happy that Romero may officially be recognized as a martyr, but it's a recognition "the humble people of El Salvador" have known all along.

"The good news is always revealed to the lowly," Duran said.

Before the Salvadoran church leader was gunned down celebrating Mass March 24, 1980, Duran accompanied Romero on pastoral visits outside the capital city of San Salvador. In a telephone interview with The Compass, Green Bay's diocesan newspaper, Duran explained how he became the archbishop's unofficial photographer.

His personal relationship with Romero began when Duran entered the archdiocesan seminary, San Jose de la Montana Seminary, in 1977 -- long before he became a Franciscan. At the time, he was a 21-year-old layman and considered too old for the minor seminary. He convinced the rector, Jesuit Fr. Ladislao Segura, to give him six months to prove himself.

When Segura died, he was asked to read at his funeral Mass. In attendance was the director of the archdiocesan radio station, Jesuit Fr. Rogelio Pedraz, who offered him a job at the station.

In 1978, Romero was at the station and the seminarian was asked to interview him -- despite his lack of experience.

"Luckily [Romero] had a few questions and he said, 'These are the topics I would like to talk to you about,' " Duran said. "After a few cuts here and there we were able to pull together a 30-minute interview on the radio."

The radio interviews continued and as Duran grew more confident in his relationship with Romero, he asked if he could accompany him on pastoral visits.

Duran thought that would better prepare him to conduct the radio interviews, but he also had a more selfish reason for wanting to travel with him.

Seminarians were required to do pastoral work, but they were targeted by death squads. "Getting on the bus with a Bible was not a good idea," he said. "There were many checkpoints along the way. Once the National Guard pulled you out, you could not even think about coming back alive." He said two fellow seminarians were killed.

Duran asked Romero if the pastoral visits could count for his seminary credit. "He said, 'Of course. Being a communicator is part of the ministry of a priest.' That gave me such a relief," he said.

His vocation as a photographer began after the editor of the archdiocesan newspaper, Orientacion, asked if he could take pictures of Romero during the pastoral visits.

He had a camera, but needed a better one. Romero gave the seminarian $200 to get a used one he had had his eye on.

It was with that Canon AT-1 and a 50mm lens that Duran captured photos of Romero that are now the lasting images of El Salvador's most beloved church leader.

"From there on I was doing radio and pictures," he said. "I am sometimes amazed that I took all of those pictures with that equipment [and] without any formal training."

Duran said one pastoral visit in particular stands out: San Antonio Los Ranchos in Chalatenango. "It was the first time that I saw Archbishop Romero shivering with fear."

The archbishop was detained and interrogated by soldiers for 20 minutes before being allowed to continue his pastoral visit.

Romero's contingent of six people, including Duran, approached the town by Jeep, and soldiers approached the vehicle, pointing rifles. "They pulled us out from the truck and they started going through everything," he said. "It was one of the times that soldiers actually searched [Romero]. They asked him to open up the cassock he was wearing."

Somehow the soldier who interviewed Duran and patted him down did not find his camera. He was worried it would be confiscated. "I will say that was one of Msgr. Romero's first miracles. They didn't even see the camera hanging on my neck."

After about a 20-minute interrogation, the soldiers allowed the group to walk up the hill to the church. Fearing violence, Romero asked that the Mass be celebrated outdoors.

The visit to Chalatenango took place in late 1979, Duran said. Several months later, at the hospital chapel across the street from Romero's residence, he was shot to death by a member of the military while the archbishop celebrated Mass.

Duran said he was at the seminary when he learned of the shooting. He and the seminary rector took a cab to the private clinic where the archbishop had been taken. "I remember seeing his body lying on a metal stretcher. ... I stayed there until the autopsy was done and then we came back," he said.

He wondered what would happen next.

"In that situation like we were, there was no room to mourn the death of the archbishop," he said. "I didn't mourn his death until a few months later -- and even years, when I realized from the feeling point of view he was gone."

He explained that in living with death every day in El Salvador, one became numb to it. "You lose the sensitivity that a human being can be killed in front of you and you feel sorry for him," he said. "You understand what's going on but it takes a long while for you to understand pain."

He also worried about his own future. Romero had offered him a scholarship to come to the United States and continue his studies. Through the intervention of a Presbyterian minister who attended Romero's funeral -- and whom he had met previously while with the archbishop.

The minister gave Duran money he used to travel to San Antonio in June 1980 and enroll at what is now called the Mexican American Catholic College.

While there he taught Spanish to missionaries departing for Latin America. One of his pupils was Franciscan Fr. Thaddeus Sapio from Camden, N.J.. They became friends, which led Duran to consider joining the Franciscan order. He applied and was accepted -- that was about 20 years ago.

As the church approaches the 35th anniversary of Romero's assassination, Duran is modest about his role in preserving the archbishop's memory through his images. He hesitates to talk with the media about Romero.

"Often I am asked, 'What was he like?' [but] the images perhaps can speak for themselves," he said. "The images describe the humanity that lived in him. They are not any pieces of art."

Duran said he does not need an official Vatican pronouncement about his martyrdom.

"If theologians had spent six months in El Salvador [with Romero], they would have realized that the moment he was killed," he said. "But sometimes people are trying to find God in the sky, when God lives among us."

[Sam Lucero is the news and information manager at The Compass, newspaper of the Green Bay diocese.]