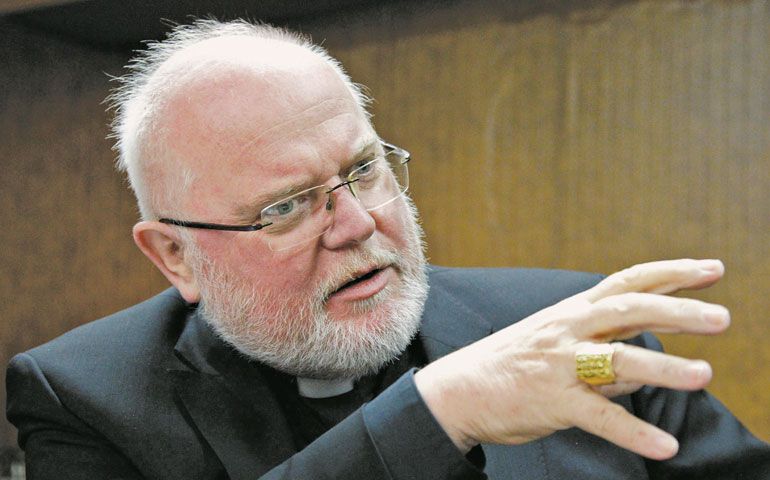 Curia reform and how to improve the Vatican's negative image will take priority when Pope Francis' eight-member council of cardinals meets in October, says the German cardinal on that council.

He also says Francis has brought a "new atmosphere" and "new sensitivity" to the church.

Cardinal Reinhard Marx of Munich gave an extended interview to the German weekly newsmagazine Die Zeit in September. He discussed the present state of the church and the changes that are crucial in his eyes.

"We need a strong central authority and that is why, as I have already emphasized in Rome, we must improve the Holy See's reputation. The Curia is here to help local churches, which are not just Roman offshoots. We must bring a positive change to the Vatican's image. It must no longer be possible for our faithful to regard the Vatican primarily as something negative. We must once again be able to be proud of our headquarters," said Marx, who is president of the Commission of the Bishops' Conferences of the European Community.

"Many problems are caused by the lack of communication between the pope, the Curia and local bishops," Marx said. "We are a world organization without parallel, but perhaps we haven't quite reached the level of development a world organization requires. In the 21st century, we need to be both a global player and a global prayer," Marx said, using the English words "global player and global prayer."

Having an efficient organization is most important, Marx said. "Many of our faithful think the church should be devout and bureaucracy is something evil. I get very annoyed when things are badly organized. The church must not be ruled feudally. Decisions must be transparent and verifiable and that only works if you have an efficient administration."

Unfortunately, the church is often still accused of wanting to steer people in directions they did not want to take, he continued. It would have to ask itself whether it hadn't set the wrong priorities when proclaiming the Gospel message. "Many older people have grown up with the idea that the church is a moral institution and that God is only a merciful God if we keep his commandments. But God doesn't say, 'If you're good, then I'll also be good to you.' Jesus proclaims a God who says, 'I love you -- so live,' and thus gives us the freedom to decide whether we want to accept and return his love."

The direction Francis' pontificate was taking became clear after the conclave, Marx said. "The basic orientation very soon became clearly visible. Here is a man who embraces people. That is the way he works, a way where pastoral work has priority."

Francis was not putting on an act when he used the bus, decided to stay in the Vatican City guesthouse or called people on his cell phone, Marx said. "People feel that it's genuine and not put on. Have you heard about the encounter in the elevator? There's a very young cardinal from the Philippines -- he's only 53, so he's younger than I am. One morning he was already in the elevator when Pope Francis got in. The cardinal was only wearing a pullover for breakfast and looked like a young seminarian or student. He murmured, 'Holy Father ...' and the pope replied 'Well, Holy Son?' The church has already changed as a consequence of the pope's open manner and it is gaining momentum. It's somehow livened up.

"That is not meant as a criticism of Pope Francis' predecessor. Benedict [XVI]'s pontificate will have a lasting, long-term effect. But there's a new atmosphere. Possibilities are opening up. Perhaps the new pope will manage to bring about a new sensitivity. The important thing is to make it clear that bishops are not feudal lords. Why shouldn't laypeople lay their hands on a bishop and bless him?"

The Vatican's recent brush with scandals put its reputation at a low ebb, Marx said. That was why Francis warned against the dangers of narcissism. "An institution that no longer serves but rather solely concentrates on strengthening and fattening itself will in the final instance harm everyone. We need more transparency, supervision and responsibility -- and, incidentally, learning from the world is not forbidden."

Asked about the Vatican bank, Marx said it was questionable whether the Vatican needed a bank at all. "I, at any rate, find it outrageous that for decades now an institution has been allowed to damage the church's reputation in the world and among the faithful."

I forgive Pope Benedict. I hope others can too.

Bishops told HHS rule is only one part of U.S. religious freedom threats