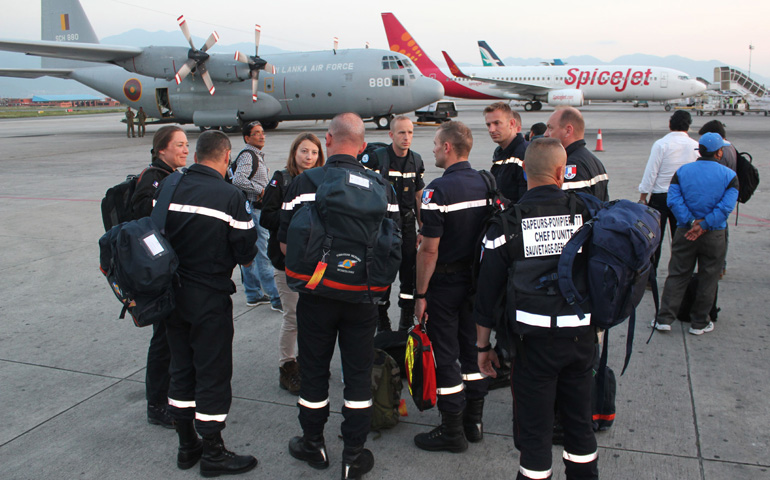 United Nations and other international relief workers stand at Kathmandu airport in Nepal on Monday. Inclement weather and logistical pressures have slowed down relief for Nepal earthquake victims. (CNS/Anto Akkara)

Inclement weather and logistical pressures were delaying aid to hundreds of thousands of Nepalese earthquake victims.

"The arrival of several Catholic aid groups are delayed due to the congestion at the airport," he said. "Those who went to collect relief material from a flight [scheduled] to land at 11:30 a.m. are still at the airport even now [at 5 p.m.]."

Kathmandu airport had to be shut and several inbound flights had to be diverted following heavy rains late Sunday. Apart from that, dozens of international flights with rescue and relief workers and vital relief material hovered around Kathmandu's only international airport for hours for lack of landing space; the airport could accommodate only a dozen international flights.

"We are trying our best to address the problems faced by the people," one government official, Govinda Mani Bhurtel, told CNS on Tuesday. Even Nepal's prime minister said Monday that the relief work had been hampered and "ineffective."

Bhurtel spoke to CNS while he coordinated dozens of government officials distributing emergency food items and assessing the requirements of more than 1,000 people who had erected temporary sheds in the ground of the Jesuit St. Xavier's School in the heart of Kathmandu.

"All government ministries are engaged in coordinating the relief work. There are more than 20 large camps like this [in Kathmandu] as the people are scared of living in the houses due to continuing tremors and of some of the houses," he added.

Amid continuing strong aftershocks, thousands of families were living in the streets of Kathmandu -- preferring to stay under tents in open areas, from parks to roadsides.

In many places, vehicles were parked near each other, with the gap covered by a plastic sheet to facilitate kitchen and sleeping space.

Yet, even those on the roads seemed to show remarkable calm and resilience.

"We are OK. We are all here because everyone is scared by the tremors. The government should reach help to the people in the remote areas," Yubak Grauchai, a businessman living under a tent in affluent New Plaza, told CNS.

The fear of aftershocks was widespread. Several families slept under tents in the compound of Assumption Cathedral, the largest Catholic church in Nepal.

At Godavari Parish, nine miles from Kathmandu, the Adoration Sisters put up tents and were living with two dozen young girls from Karuna Bhavan, a home for HIV orphans.

Nine Missionaries of Charity vacated their center near Mitra Park and sought refuge at the order's nearby center for sick and destitute women.

"See the cracks in our building. Even our neighbors told us to go away as the nearby building is slanting to our house," said Missionaries of Charity Sr. Judita Mary.

"We ran to the road when the building started swinging," recounted Sister Elise, her colleague.

Chirendra Satyal, who works in interfaith and ecumenical relations for the Catholic church, told CNS, "It is providence that the earthquake happened at a pleasant Saturday noon.

"It occurred at a time when most of the people were out in the open enjoying the pleasant sunny noon. Otherwise, the death toll would have been in tens of thousands," Satyal said.

More than 4,300 were killed, more than 6,000 were injured and a million people were homeless in the April 25 quake.

The death toll was expected to rise as rescue teams could not reach hundreds of remote villages flattened by the quake in the nation situated in the lap of the Himalayas.

Though most of the dead bodies had been pulled from the debris in Kathmandu, dozens of soldiers were keeping anxious crowds away while earth-movers continued to remove the rubble, looking for missing bodies.