The inconsistent US role on chemical weapons 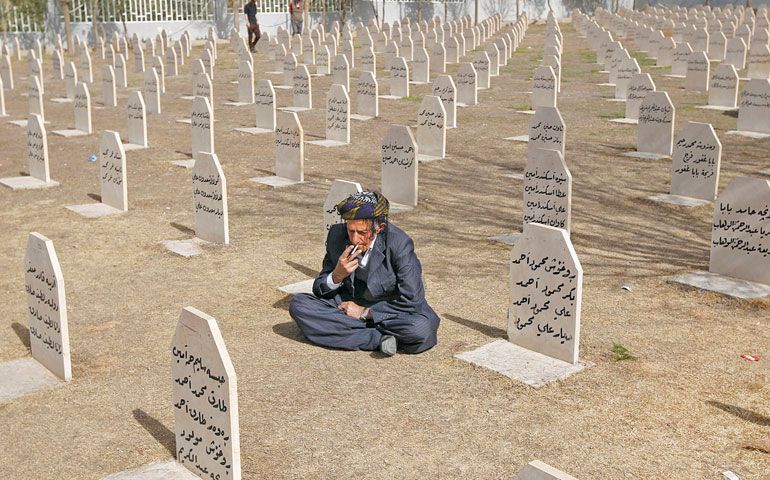 On March 16, an Iraqi Kurd visits the cemetery for victims of the 1988 chemical attack in Halabja, Iraq. (Newscom/Reuters/Thaier al-Sudani)

The Syrian regime's apparent use of chemical weapons against civilian areas Aug. 21 constitutes a major breach of the Geneva Protocol of 1925, one of the world's most important disarmament treaties, which banned the use of chemical weapons. The Obama administration has made clear that the only way the Syrian regime could avoid U.S. military strikes on their country would be to place their chemical weapons stockpiles under international control to ensure their removal and destruction, which is now underway as a result of the U.N. Security Council resolution passed unanimously Sept. 27.

In 1993, the international community ratified the Chemical Weapons Convention, a binding international treaty that would prohibit the development, production, acquisition, stockpiling, retention and transfer or use of chemical weapons. An outgrowth of the convention is the Organization for the Prohibition of Chemical Weapons, which has successfully overseen the destruction of more the 80 percent of the world's chemical weapons over the past 20 years. A joint U.N.-OPCW team arrived in Syria Oct. 1 to oversee the elimination of Syria's chemical weapons production facilities.

The Obama administration's support for OPCW stands in contrast to the Bush administration, which was dismissive of the agency and forced the removal of its highly effective chairman José Bustani in 2002.

Syria is one of only eight of the world's 193 countries not party to the Chemical Weapons Convention. Neither are the world's two largest recipients of U.S. military aid -- Israel and Egypt -- which is just one example of the United States' inconsistent and politicized policy regarding chemical weapons. No Congress nor any administration of either party has ever called on Israel or Egypt to disarm their chemical weapons arsenals, much less threatened war for their failure to do so.

It's not as if Syria is the only country that has engaged in chemical warfare. Egypt used phosgene and mustard gas in the mid-1960s during its intervention in Yemen's civil war. The U.S.-backed Egyptian regime has continued its chemical weapons research and development program.

Israel is widely believed to have produced and stockpiled an extensive range of chemical weapons and to be engaged in ongoing research and development of additional chemical weaponry. Indeed, it appears that Syria may have initiated its chemical weapons program as a response to Israel's chemical, biological and nuclear programs.

During the Iran-Iraq War in the 1980s, Saddam Hussein used chemical weapons on a scale far greater than any country had dared since their banning following World War I. The Iraqis inflicted close to 100,000 casualties among Iranian soldiers using banned chemical agents, resulting in 20,000 deaths and tens of thousands of long-term injuries.

They were unable to do this alone, however. Despite ongoing Iraqi support for Abu Nidal and other terrorist groups during the 1980s, the Reagan administration removed Iraq from the State Department's list of state sponsors of terrorism to provide the regime with thiodiglycol, a key component in the manufacture of mustard gas, and other chemical precursors for their weapons program. In fact, recently released CIA documents show that personnel from the U.S. Defense Intelligence Agency were dispatched to Baghdad during the war to provide Saddam's regime with U.S. satellite data on the location of Iranian troop concentrations in the full knowledge that the Iraqis were using chemical weapons against them.

Even the Iraqi regime's use of chemical weapons against civilians was not seen as particularly problematic.

The Reagan administration downplayed Saddam's massacre of up to 5,000 Kurdish civilians with chemical weapons in the northern Iraqi city of Halabja in March 1988. Some officials even falsely claimed that Iran was actually responsible. The United States continued sending aid to Iraq even after the regime's use of poison gas was confirmed. Both the Reagan and George H.W. Bush administrations blocked congressional efforts to place sanctions on the Iraqi regime in response to the chemical weapons attacks.

This year, Secretary of State John Kerry led the Obama administration's initial efforts to convince Congress to authorize military force against Syria by insisting, "Chemical weapons were used by the regime. We know this." However, in the fall of 2002, Sen. Kerry falsely claimed, "Iraq has chemical and biological weapons ... and [their weapons programs] are larger and more advanced than they were before the Gulf War."

Similarly, House Democratic leader Nancy Pelosi, who led the pro-war effort in that chamber, insisted that Syria's use of chemical weapons is "undeniable." However, in November 2002, she falsely claimed that Iraq "certainly" had chemical weapons and that there was "no question about that."

Even though they are apparently telling the truth this time, this record of deceit makes it difficult to trust U.S. officials when it comes to accusations regarding hostile Arab governments and chemical weapons.

Even more problematic has been U.S. efforts to block region-wide efforts at disarmament.

U.N. Security Council Resolution 687, the resolution passed at the end of the 1991 Gulf War demanding the destruction of Iraq's chemical and biological weapons and the dismantling of its nuclear program, also called on member states "to work towards the establishment in the Middle East of a zone free of such weapons."

Syria has joined virtually all other Arab states in calling for such a "weapons of mass destruction-free zone" for the entire Middle East. In December 2003, Syria introduced a U.N. Security Council resolution reiterating this clause from 12 years earlier, but the resolution was tabled as a result of a threatened U.S. veto.

A case can be made, then, that had the United States pursued a policy that addressed the proliferation of nonconventional weapons through region-wide disarmament rather than trying to single out Syria, the Syrian regime would have rid itself of its chemical weapons some years earlier, along with Israel and Egypt, and the tragic use of such ordnance and the resulting push toward war would have never happened.

Perspective | The inconsistent US role on chemical weapons

V-E Day and Trump: What he refuses to learn explains his failure to lead