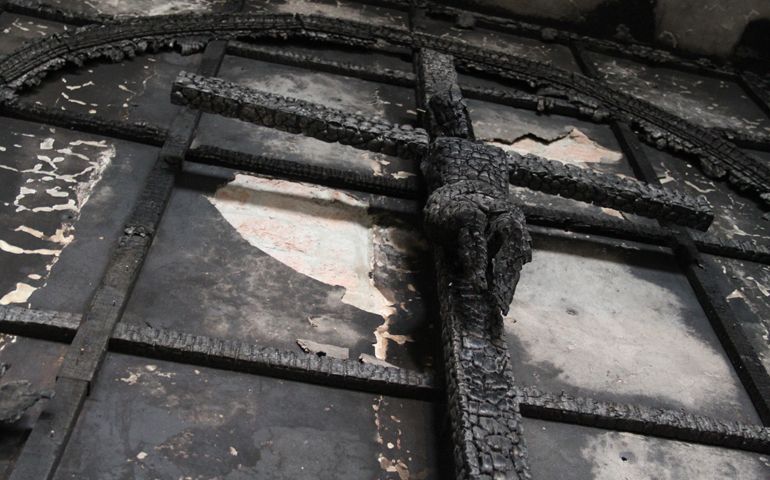 The charred crucifix at the altar of St. Sebastian's Church in Dilshad Garden, New Delhi, which was gutted by a fire on Dec. 1. (John Mathew)

The shrill sound of his car alarm awoke Fr. Eugene Moon Lazarus around 3 a.m. on March 16. As he rushed out of his room, three other priests living in the presbytery also came out with puzzled looks.

They found some strangers running away from Lazarus' car, which was parked inside the church premises. The car doors were open. They also found at least four broken statues of Mary and one of baby Jesus.

In the report he filed with local police, Lazarus said what pained them most was seeing a dog leash tied to the neck of life-sized statue of Mary.

"The attackers have not only broken the images inside the church, but they have played with the sentiments of Christian community," he said.

Lazarus is the parish priest of St. Mary's Church in Agra, a city in Uttar Pradesh state famous for the Taj Mahal.

Such incidents have been reported from various parts of India over the past few months.

A month earlier, a Catholic nun in her 70s was gang-raped and a convent was looted in Ranaghat town in West Bengal state.

Before that, five churches and a convent school were targeted in New Delhi, the nation's capital. The first was on Dec. 1, 2014, when a mysterious fire gutted St. Sebastian's Church in Dilshad Garden, an eastern suburb.

A statement from the Catholic Bishops' Conference of India after the Agra attack said such incidents are not "mere acts of vandalism, but well planned dastardly acts, aimed at deeply wounding the religious feelings and creating a feeling of insecurity among the minorities." The attackers, the bishops said, wanted to inflict "maximum shame and disgrace" on Christians. The bishops demanded swift action against the culprits.

In a week, police arrested three people -- all Muslims -- in connection with the Agra incident. They said April 24 that the incident was the result of unrequited love between a Muslim boy and a Catholic girl.

Those arrested in the nun's gang rape case were Muslim, which caused some Christian leaders, who say the incidents have been carried out by Hindu radical groups, to believe the incidents are deliberate attempts to put India's two prominent religious minority groups -- Muslims and Christians -- at loggerheads.

According to John Dayal, a Catholic lay leader and former member of the prime minister's National Advisory Council, the police seemed to take special care not to identify any Hindu as a suspect.

"Criminals can come from anywhere," he told NCR. "They can be hired by anyone. The police are often wrong. They arrest Muslim youth for being terrorists but have to release them because their version is rejected by the court."

The arrests of Muslims help the government not to act against the Hindu radicals, he said.

Dayal and others say Christians have faced persecution since Prime Minister Narendra Modi came to office a year ago.

Modi is a former member of the Rashtriya Swayamsevak Sangh (RSS, a national volunteer organization), the umbrella organization blamed for a wide range of sectarian riots in India. It was founded in 1925 to unite Hindus, counter British colonialism in India, and suppress Muslim separatism. The British colonists had banned it once and the Indian government three times, first in 1948 when a former RSS member assassinated Mahatma Gandhi.

Dayal said while many see RSS cadres' hands in the recent attacks on churches, the RSS is keen to prove the Christian complaint of persecution as false and that no Hindu is involved. They want to show that the allegation of Christian persecution is a ploy to collect funds from within and outside the country, he said.

But many academics, social activists and political leaders blame the Hindu radicals for the attacks.

A group of them drawn from all religions staged a protest in New Delhi on March 19, the day the Modi government completed 300 days in office. They labeled the church attacks as part of Hindu radicals' systematic attempts to intimidate Christians under the new government.

They released a report that listed at least 43 deaths in more than 600 cases of violence, 149 targeting Christians and the rest targeting Muslims, during those 300 days. The group said India witnessed several cases of desecration of churches, assault on pastors, and illegal police detention of church workers in the same period.

Dayal, who helped write the report, said the actual number of anti-Christian incidents is higher because many cases go unreported. The RSS and organizations affiliated to it became more active after Modi came to power, he said.

"There is also impunity," he added.

Speeches by Hindu leaders and some ministers against Christians and Muslims give credence to such a view.

RSS chief Mohan Bhagwat often says that every Indian is a Hindu, and minorities will have to learn their place in the country. "Hindutva [Hinduness] is the identity of India and it has the capacity to swallow other identities," he said in August. "We just need to restore those capacities."

On April 20, Munna Kumar Shukla of the Hindu Mahasabha (the grand council of Hindus) justified the attacks on churches, saying such acts do not violate law because churches are no more places of worship, but factories for converting Hindus to Christianity. In fact, he said the federal government should protect and award those targeting churches.

Shukla's remarks not only disproved the police and government stand on those incidents, but unnerved the Catholic bishops. They issued a statement April 24 condemning Shukla's remarks as "highly insinuating and derogatory," saying they contribute to an increase in violence against Christians and other minorities.

"All such attacks indicate a sinister pattern and evil design calculated to denigrate and defame the Christians, peace-loving and law abiding citizens of India," the statement said.

R.K. Chattree, a Hindu social activist who attended an April 23 protest rally against the Agra incident, said all attacks in the past six months had the same modus operandi, which he said "indicates the role of the same group in all incidents."

The Indian Constitution allows citizens to profess, practice and propagate the religion of their choice. The constituent assembly that drafted the constitution from 1948 to 1950 rejected Hindu nationalists' demands to make India a theocratic nation, like neighboring Pakistan. The drafters chose secularism as the national identity to allow equal respect and treatment for all religions.

RSS and other groups say that the Hindu population has gone down partly because of Christians indulged in fraudulent conversion of the poor and gullible Hindus. So much so, its chief found fault even with Mother Teresa.

Bhagwat told a meeting Feb. 23 that the world-renowned nun's prime motive for service was to convert the poor and destitute to Christianity and that her selfish aim devalued the virtues of a noble cause. He also said he had seen forced conversion of tribal people by Catholics when he was working in India's northeastern region.

Such statements have emboldened people to organize religious rituals to convert Christians and Muslims to Hinduism through what they call "ghar wapsi" (homecoming) at various places in the country.

The 300-day report says these divisive activities have diverted the government from fulfilling its election promise. Modi, the report notes, came to power riding a promise of development. Development remains a mirage even after 11 months, but the hate has spread across the country, it adds.

Navaid Hamid, general secretary of the Movement for Empowerment of Muslim Indians, said at the March 19 protest that Hindu radicals and the ruling Bharatiya Janata Party (BJP, Indian people's party) "do not believe in diversity and wish to have everyone follow their own dictates." This has brought the basic tenets of the Indian Constitution -- secularism and pluralism -- "constantly under attack, and minorities are a part of that," the Muslim leader said.

Prime Minister Modi's initial silence on the attacks baffled many because when he took the oath of office, he called for a 10-year moratorium on sectarian violence. He not only refused to reprimand his Cabinet colleagues for making anti-minority remarks, the 300-day report says, but declared Christmas as a "Good Governance Day" to honor former Prime Minister Atal Behari Vajpayee, who was born Dec. 25.

Some Christian leaders at the March 19 protest told NCR that Modi reprimanded them for being misled by newspaper reports when they complained about the church attacks. They said he refused to acknowledge Christians were under attack.

However, he relented after his party suffered a defeat in the election for Delhi legislative assembly. (The BJP could win just three seats in the 70-member house.) Modi addressed Christians for the first time Feb. 17, nearly nine months after he took over as a prime minister.

"We cannot accept violence against any religion on any pretext, and I strongly condemn such violence. My government will act strongly in this regard," he said.

But Modi's assurance seems to have little impact as the attacks on churches continue and the Hindu hard-liners indulge in hate speeches.

Meanwhile, people such as Jayanta Roy Chowdhury, a New Delhi-based journalist and a Hindu, urge Christians not to become defensive because India will remain a secular country. Chowdhury told NCR that Modi and his cohorts do not have the support they think they have because Indians generally do not like radicals.

Chowdhury, however, wants all religions to curb "crazy evangelists" among them.

Nirendra Dev, also a Hindu journalist in the capital and an admirer of Modi, said he does not believe Christians are being targeted. The attacks are incidents with a peculiar pattern, he told NCR. He said he blames Christians and Hindus for the present situation.

Hindus, as the majority community, should have acted more responsibly, he said, adding that  a substantial section of Christians had turned anti-BJP and backed the opposition Congress.

Fr. Ajay Kumar Singh, a social activist in Odisha, an eastern Indian state, said anti-Christian violence is not a recent phenomenon. Odisha witnessed one of the worst attacks against Indian Christians: An estimated 100 Christians were killed and some 50,000 rendered homeless in monthslong violence that began Aug. 24, 2008, a day after Maoists killed a 90-year-old Hindu sage and his five companions.

It was also in Odisha that Hindu radicals burned to death Australian missionary Graham Stuart Staines and his two sons, ages 10 and 6, in January 1999. A few months later, the same radicals killed Fr. Arul Doss of Balasore diocese.

Singh said he blames the early RSS leaders for such "alarming situations" by identifying Muslims and Christians as internal enemies for subjugation and elimination.

"I am concerned about the India's survival as a secular and democratic nation," the priest told NCR. "It is not just the minorities' life at stake, but the very fabric of the nation."

[Jose Kavi is the editor-in-chief of Matters India, a news portal focusing on religious and social issues in India. This article is part of a collaboration between National Catholic Reporter and Matters India.]

Immigration, religious liberty and synod on agenda for bishops' meeting